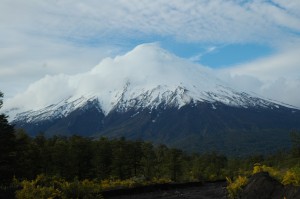 Although it has been a number of days since the ash clouds from Volcano Puyehue had completed a circumference of the earth, it was not until this past Sunday that the wind currents carried the mass to Concepcion. At first, I didn’t realize what I was seeing, and only recognized that my eyes were suddenly irritated. I joked with our concierge that it looked like Santiago smog. In actuality, I thought that it was just fog setting in.

By 3pm, the skies were solid grey. While crossing Plaza Peru to buy lunch and check out the regular Sunday flea market, the ash was making breathing uncomfortable. I pondered the possible need to wear OR masks, and was thankful to have not taken our dogs for a run around campus. I was also glad that it was this time last year, and not now, that we were in Puyehue.

Even though we had seen the news clips on television, and had “witnessed” the volcanic plumes that deposited more than three feet of ash in some areas of close proximity to the volcano, it seemed a remote event. It had never occurred that we would be exposed to the aftereffects this far north.

The eruption of the volcano was an incredibly visual reminder of the geological activity occurring below the surface of Chile’s verdant valleys and snow capped Andes. During the last four years, there have been two major volcanic eruptions (Chaiten in 2008; Puyehue, recently) and one planet-shifting 8.8 earthquake (February 27, 2010). 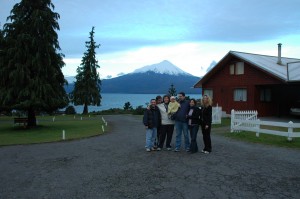 Surprisingly, Chile is home to numerous volcanoes, 36 to be exact. Many are still active today. One of the most active, Volcano Osorno (lead photo), had eleven major eruptions between 1575-1869. Located about 60 kilometers from Puerto Vares, in the southern part of Chile, Volcano Osorno assumes a command position in the southeastern landscape of Lake Llanquihue, and can also be seen from Lake Todos Los Santos (All The Saints). Both lakes have received lava flow from this volcano. 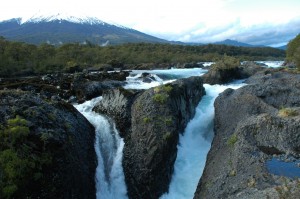 Petrohue Falls, located in Parque Nacional Vicente Perez Rosales (Vicente Perez Rosales National Park), was formed by the volcano’s lava flow.  Although the Falls do not possess mind-boggling height, the force of the green-hued water and the dramatically carved and smoothened basaltic rock is captivating. Volcano Osorno can be seen in the distance from the Falls.

Volcanologists have determined that Volcano Osorno is formed over an eroded stratovolcano that is more than 250,000 years old. Named “La Picada,” this ancient volcano is buried in the 6 km wide caldera of Volcano Osorno. 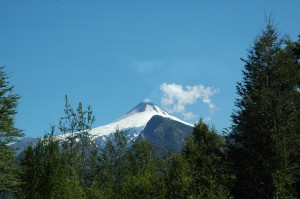 Villarica, near Pucon. This volcano is often seen spouting smoke, and has a magnificent lava lake. Hiking tours, as well as helicopter rides to view the volcano are offered through one of the many recreational sightseeing services in Pucon.

The most dramatic of recent volcanic eruptions was that of Volcano Chaiten, in May 2008. The resulting lahars, which are viscous mudflows of pyroclastic material, water and debris, almost completely destroyed the nearby town of Chaiten in May 2008. Lahars flowed like rivers and then solidified, filling and burying many homes and businesses under massive mud and silt,

We were in the midst of making arrangements for our move to Chile, and would follow Chilean news reports over the internet. At the time, I never realized or appreciated how Chile’s geologic unrest would touch my life.

Today, it is amazing how we’ve accommodated our perspectives to this new environment. Earthquakes, tsunamis and volcanic eruptions have impact, but little persuasive influence in changing our pursuit of life and happiness here. In some respects, we are like moths to a flame. Even though the danger is noted, we can’t help but be attracted to the spectacle.