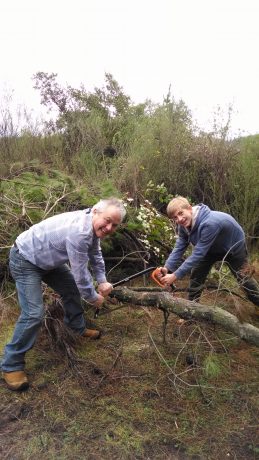 More than a year has passed since our lab was unceremoniously kicked out of the med school by a new administration that verbally took pride in not believing in oncologic and endocrine research. What century they believed to be living in is up for debate, what wasn’t was the sudden redefinition of our professional existence. While our research projects continued to progress, they were fragmentized and scattered between different institutions and labs of sympathetic colleagues. It was and continues to be a time of precariousness in work structure, financial stability, and mental wellbeing. Thankfully, God was way ahead in the game, and had laid the groundwork in preparing a new horizon, a new mountain…or in our case, a new hill to climb. It was not only a new hill, but also an incredibly littered one to clean, and it has proven to be our saving grace. Without the hard physical work to bring order back to Pine Cone Hill, we would have surely lost our bearings, and sanity too.

Our property had once been part of a local family’s farm. When the parents passed away, the land was divided among the siblings, some of whom had moved away to more urbanized settings. Their lifestyle changes eventually opened the way for new families, such as ours, to embrace a countrified way of life. What they also left behind to embrace were decades of pine harvesting that created massive seas of undulating tree limbs, which covered just about every place that we walked. It was almost impossible to walk without rolling on something. Much to the delight of our pointer Missy, there were pinecones everywhere as well…hence the name, Pine Cone Hill.

Several days a week, for month after month, we stooped down to pick up and pitch branches, some the size of young trees, onto seemingly mile high and mile long piles for burning. Instead of a small family farm, we were looking more like a pine plantation after harvesting. Initially, we tried burning the piles on our own, but one fateful day taught us the precariousness of not yet having water to the top of the hill. A gust of wind carried embers into the fire-loving embrace of ritimia (a sapling-like weed), dry grass and other branches. We lost a small section of maki trees before our shovels and rakes contained the fire. It was then that we called in the big bulldozers to dig a massive hole at the bottom of the hill in which to burn safely. Although the bulldozers cleaned out a couple acres of pine branches and ritimia, much of the natural beauty was temporarily lost in the process. Instead of undulating branches, we were left with undulating tire tracks…but at least they couldn’t burn.

With at least part of the hill cleaned, we were left to concentrate on getting water to the top. Two streams cross our property, but unfortunately both were on the other side of the right-of-way roads. Although a challenge, it was not insurmountable. At first, we invested in an electric pump and the usual rigid, plastic black hose that is common here. However, getting electric to the stream proved to be a hassle, and the weight of the black hose sent it slowly sliding down the hill. Also the early attempts at creating sufficient water depth by damming the stream with rocks and wood were inefficient. So, after countless trips to the Hidrocenter, a store specializing in plumbing, we finally opted for a gas pump and flat hose that firefighters use. When not in use, the hose closer to the bottom of the hill can be rolled up, and hidden out of view. We also bought bags of gravel, dug a deeper trench in the stream, and used the existing clay to patch up the gaps between the bags. While we have yet to pump water up to the top, our first attempt with this setup proved that it was possible.

Rather than tolerating a not so aesthetically pleasing view of giant plastic water tanks, we decided to purchase an 18′ oval above ground pool. The pool has a filtration system, and from there the water will be filtered again and purified as done in the lab. While some families in the area are using the water directly from the stream, we are ever mindful of what can land and grow in nature-fed water, and are opting on the side of safety. As the municipality will truck in water for consumption, the water will be used only for bathrooms and irrigation. Our hope is to eventually dig a well closer to the house.

During breaks from the physical labors of preparing the property for our permanent home, we have wandered around with dousing rods. Contrary to all of the online myths and perpetuated untruths of water dousing, there is a scientific explanation to the crossing of copper rods. Bodies of underground water interrupt the magnetic field of the Earth, causing the rods to cross. No witchery or magic, just simple science that even the ancient Greeks understood, and William Gilbert had investigated way back in the 16th century. At any rate, we have discovered what seems to be an underground napa near the top that runs between both streams. With a little bit of grace, this napa will be sufficient for a well. We have been waiting for the end of summer, when the hill is at its driest, to explore whether our assumptions are real. Real or not, we will learn to cope, just as people have for the last 500 years on our land.