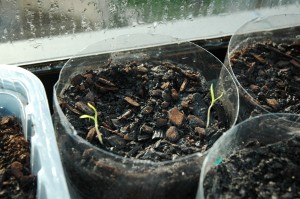 This month marks the beginning of our third year in the apartment, and although I have been living with a strong urge to own a house with grass and soil that I can dig my fingers into, I’m slowly reconciling myself to spending at least another Spring six stories above Mother Earth. So, to quell my longing to have my former gardens back, I’ve made a resolution to give balcony farming a serious try.

It’s been a bleak winter in many ways. Students have been “en toma” (taken over) of the university for a few months now, and the vibrant ebb and flow of scholars has morphed into political revolution. Two people in our “glass-walled” apartment building wined enough about our having two dogs that we are now being forced to place one in a new home (thank God, we found a good family), which has been breaking my heart. Heating prices have been so expensive that we suffered through the coldest months with the heat turned on only for fifteen minutes before bed. Needless to say, any sign of hope and promise would be welcomed.

My promises of a better tomorrow poked their heads out while I was sleeping. I awoke to find tender leaves of Roma tomatoes and cilantro basking in the morning sun. Although hardly a stranger to gardening, having had kitchen gardens as large as an eighth acre, I had worried that the soil bought at Sodimac may not have been the right one for starter plants, and that the seeds, a mix from the last couple years, may not germinate. This morning’s finding was both a relief and a surprise.

The apartment has two narrow balconies, approximately 3.5’ x 15’, both of which receive full morning sun.  We currently have two pine trees (potted for yearly use as Christmas trees), two roses, one lavender, one peach tree, two arrayan trees, three young eucalyptus taken from a friend’s farm, and a sundry of smaller flowering plants. With exception of the peach tree, which only had five peaches the first year, and may not have survived the winter, all seem to be faring well. The roses, however, have become infested with tiny green aphids, and will have to be treated (for now, I’m letting the spiders have a go). So, I know that ornamental plants will survive. The real question is whether vegetables will thrive.

During the past few weeks, a variety of hot peppers, zucchini, cilantro, basil, and oregano have been planted in recycled plastic bottle bottoms and leftover containers from mixed salad greens. Lettuce, garlic, radishes, and other vegetables are awaiting future containers. The soil used was “Tierra de Hojas: Terra Garden” sold at Sodimac (Chilean version of Home Depot).

In addition to vegetables, I am experimenting with seeds saved from limes, lemons, mandarin oranges, as well as fruits native to Chile. Saplings taken from base of the largest fig tree that I’ve ever seen are also leafing on the windowsill.

While the mini garden will never replace the thrill of tilling, planting, and reaping, it does serve to keep me connected with the feel of nature, living within and upon concrete. For now, I will have to patient with time, and closely monitor the progression of my windowsill greenhouse and balcony farm.