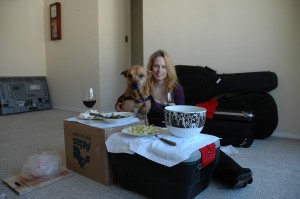 In the open pages of “Japan Style,” authors Geeta Mehta and Kimie Tada wrote, regarding the minimalization of Japanese houses and furnishings, “lightness was in part a response to Japan’s frequent earthquakes, and in part to the Buddhist teachings about the transient nature of all things.”

Although anxious to continue reading the book that had been weeks in transit, I needed to pause for reflection upon my own responses to last year’s major earthquake in Chile. The words captured my own loss of interest in materialism, and the emotional need of most people to be surrounded with more than is necessary for function or comfort.

The funny thing is that in the days and months that followed the earthquake, when we were holding dinners for all friends who felt traumatized and were in need of a hot meal and companionship, those previously coddled things were scooped up and tossed in the drawer. It would be almost a year before I would finally congregate them into “communal” boxes, forget the individual wrap.

Although we were more fortunate than most, our apartment, which had just been completely renovated six months prior, had sustained cosmetic damage, and we had lost valuable artwork, crystal, china, books, small appliances, and other items. Surprisingly, we just quietly cleaned things up, and pushed it out of mind. In comparison to being close to having lost our valuable lives, those “valuable” things just didn’t matter. This sentiment was a definite boon to the two puppies that entered our lives during the year of aftermath.

The reigning sentiment is a question of why we should put such stock into things that can be easily destroyed or taken away. In particular, at what point in my life in the U.S. did I decide that consumer goods were worth expending my life to possess? Even though I have parted with many furnishings in my lifetime, there was always a belief that it didn’t matter because I would just replace them later.

Fortunately, prior to the earthquake, I had already been exposed to living with less. The initial move to Chile had required a heavy hand in sifting through two households of accumulated goods. We were limited to a small portion of the shipping container, as the research lab and car would occupy most. Importation regulations also required that the car be shipped empty, and valuable space was sacrificed to avoid buying a car upon landing.

Our container left the States two months prior to ourselves, leaving one empty house to rattle around in. Left behind were the bare minimum, things that would later be given to friends or donated. After the initial shock dissipated, a sense of liberation settled in. It seemed as if both the house and our family could breathe again. We found many new ways to enjoy the freed up space. One large room became our dance floor at night, and even a surface for the boys to ride their skateboard from one end of the house to the other. Without furniture to block the way, the room became a room of potentials.

After arriving in Chile, we found a small apartment in which to begin life anew. While awaiting the inspection and release of our belongings, we learned to pile boxes together for a table, sat on the floor to play our instruments, and in general, lived life unencumbered by having to take care of things. Even after passing through inspection, most of our furnishings remained in storage or borrowed by friends while awaiting the day for a larger abode. Although we had moved the Viking stove and refrigerator to the apartment, they wouldn’t fit through the kitchen door, and sat in the corner of the tiny room that served as both living and dining. I was relegated to learning to cook with the “Betty Crocker oven” in the kitchen, while joking that having the fridge in the living room was every man’s dream.

Our second apartment provided the space needed to bring all of our furnishings together, in one space. After undergoing major renovations and room reconfigurations, it was ready for habitation just six months prior to the 8.8 earthquake. For half a year, we enjoyed the space as had been dreamed, and then February 27, 2010 arrived.

It would take a year before we would begin to feel normal again, and could settle back into a routine life. Much had changed. Our furnishings have become fewer, our need to have things has become less, and our desire to live life fully has become expansive. Although never wanting to experience such a tragedy again, and knowing that as long as we reside in Chile, the potential is real, I am grateful to have had my soul made light.