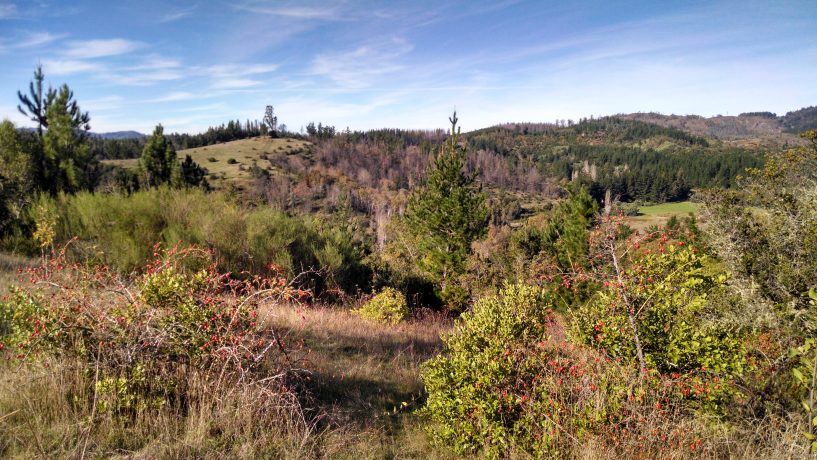 During the late 1990’s, the English progressive rock band King Crimson released an album entitled, Sometimes God Smiles, as a follow-up to their previous album Sometimes God Hides. The titles have always struck my mind for they reflect how we sometimes look at God’s movement in our lives. The past two years have brought many changes in our lives, some good, some bad, but all definitely for the best. There were times when we wondered where God’s hand was in all of the difficult challenges, but now we know that God was smiling the whole time that we were being reshaped for the next phase of our lives.

While there were many and especially challenging changes, there is one transition that just cries out to be shared. A couple years ago while camping, we had recognized our need for tranquility in our lives, as well as the desire to get out of city and apartment living. However, after countless searches for land proved futile following the massive fires that had devastated the countryside, we resigned ourselves to building on our sloped land near the ocean. It was no longer our heart’s desire, but the land was owned outright, and the community had 24-hour security. However, we had lost interest in any of the other amenities that the closed community had to offer, and tired of the elitist attitudes of some of the residents. Nevertheless, it seemed the practical decision, and a means of escape…that is, until it came to the reality of building.

We had found a great prefab company to work with, had spent countless hours redesigning one of their plans, but no matter how much we pursued, we could not come up with a financially feasible…that is to our finances…way to construct the foundation. We didn’t want to deconstruct the hillside, preferring to keep it natural. However, either the proposals for a metal structure were way too expensive, or we couldn’t get an engineer to do the planning when we found a resource for wood. No matter what we tried, the plans just wouldn’t gel. Even the friend that wanted to buy our apartment couldn’t get his finances in order, and we couldn’t build without closing the sale. So we were stuck, or so it seemed.

The block in the road that we tried to bulldoze through was there for a reason. We weren’t meant to build the house on that property. It wasn’t where we were meant to be. It took another event to make that very apparent for us. We had been praying for a little peace in our lives, but a momentary lapse in judgment of a neighbor proved to be the unsettling catalyst to push us in the right direction.

Several months ago, as I was taking our dogs Teddy and Missy out for their “big walk,” two massive boxers came barreling out of their yard, running straight for us. Why the owner didn’t secure them first before pulling out of their gate, I’ll never understand, but she apparently was too busy with her phone to pay any mind to my yelling for help as she drove away. The boxers toppled me over into the muddy street, knocking my shoes off, and attacked my dogs. I yelled and yelled for help, and eventually the other owner came out. He just looked in my direction, called his dogs, and closed the gate. He never made any motion to walk over, and make sure that we were okay. I found my mud soaked shoes, and we walked the block home, terribly shaken by the ordeal. Incensed by the complete lack of consideration, Sergio ran out to confront the man, who proved to be extremely arrogant and refused to acknowledge any responsibility. His attitude was too much like some of the people we were trying to escape from in the ocean-side gated community.

The following weekend we had lunch with family, and listened to our nephew and his girlfriend share tales of the wonderful times they had with her grandparents who lived in Yumbel. Almost 70 miles inland from Concepción, Belen’s grandparents lived a quiet country life, just the kind of life we were looking for. So with renewed ambition, I took to the internet to see if there was another direction, another road, another property intended for us.

Armed with a list of potential sites, we hit the road once again, driving through areas that had either been devastated by the fires, or were beautiful but too far out to feasible. Also, many were beyond the ridiculously expensive tollbooths. The exception in the bunch was one property that was listed to be in the community of San Nicholas… Saint Nicholas, the Wonderworker.

After several failed attempts to find the property, we finally gave in, called the realtor, and agreed to meet with him. As it turned out, the property was actually in a much smaller community, and San Nicolas was just the closest reference. But, no matter, for what we found left us with jaws hanging in wonderment.

Situated near the tiny pueblo of La Paz were almost were almost 6 hectares (14 acres) of untouched by fire, virtually virgin (which in Chile means still native vegetation and trees, not planted with pine or eucalyptus) land that flowed from one stream in a ravine, up a hill, and back down to another stream. We walked the property in utter amazement, and with great joy for we knew in our hearts that we had found home. It was just what we were looking for, within easy distance from the city, and at a price we could afford. It was a dream come true, a prayer being answered.

Days after the acceptance of our offer, I was standing at the stove, cooking and thinking about the property, when it occurred to me how God was moving in our lives, and how He had really answered our prayers to find a home. We had prayed for a little peace in our lives, and He provided just that. The property was in the district of the Escuela de la Paz, La población de la Paz, and La Cepilla de la Paz…the School of Peace, the Hamlet of Peace, and the Chapel of Peace. God had given us a little piece of peace!