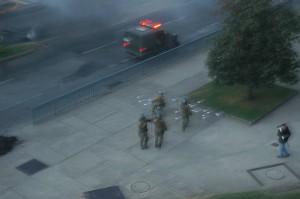 Massive student protests are taking place nationwide today. In Santiago alone, more than 50,000 students marched in protest along Alameda. Although not as large a movement, students are rioting in Concepcion as well.

I had postponed going to the office, hoping that there would be a safe opportunity. However, from apartment balcony, I could hear the sounds of armored vehicles, sirens, police water engines revving up to hose down the protesters, the pings of rocks and concrete pelting the armored buses and cars, the shouts and whistles of students, and the barks of street dogs joining in on the frenzy.  Finally in the late afternoon, I decided not to wait any longer, and ventured out.

The walk to the university was surreal. There was virtually no traffic on the streets, and spectators stood scattered behind trees and on distant sidewalks, watching the interaction. Many of the entrances were blocked by police vehicles, engaged in a thrust and parry with students. As chaotic and dangerous as the entrances seemed, the heart of the campus was relatively quiet.

Hurriedly striding to the Arch building, which was both where our office is located, and the hub of protest activity, I gave furtive glances toward each passing campus entrance. I could see protesters engaged in rock versus water skirmishes. The protesters would lob rocks, concrete, and whatever else could be ripped from campus sidewalks, benches, and buildings, while the police would retaliate with massive bursts of water to drive the protesters back.

The calm in the heart of the campus made me feel like I was standing in the eye of a storm. Conflict swirled around the outer edges while the center remained stable. Occasionally, a masked protester ran by, a reminder that the feeling of security was mutable.

With key in hand to be ready to quickly open the iron gate of the building. I pushed onward toward the front of the campus. Large areas of the sidewalk had been plied away, revealing raw, muddy earth beneath. There was rubble everywhere, and the recently restored concrete benches were no more.

There was a greater frenzy among the protesters; their adrenaline was palpable. Just as I was approaching the stairs leading up to the halls of learning, a torrent of water was blasted down the walk leading from the street to the entrance of the building. I ran up the stairs, thrust the key in the lock, and slammed the gate behind. Within the massive 1919 building, I breathed a sigh of relief and thanks to be able to resume my more peaceful struggles upstairs.