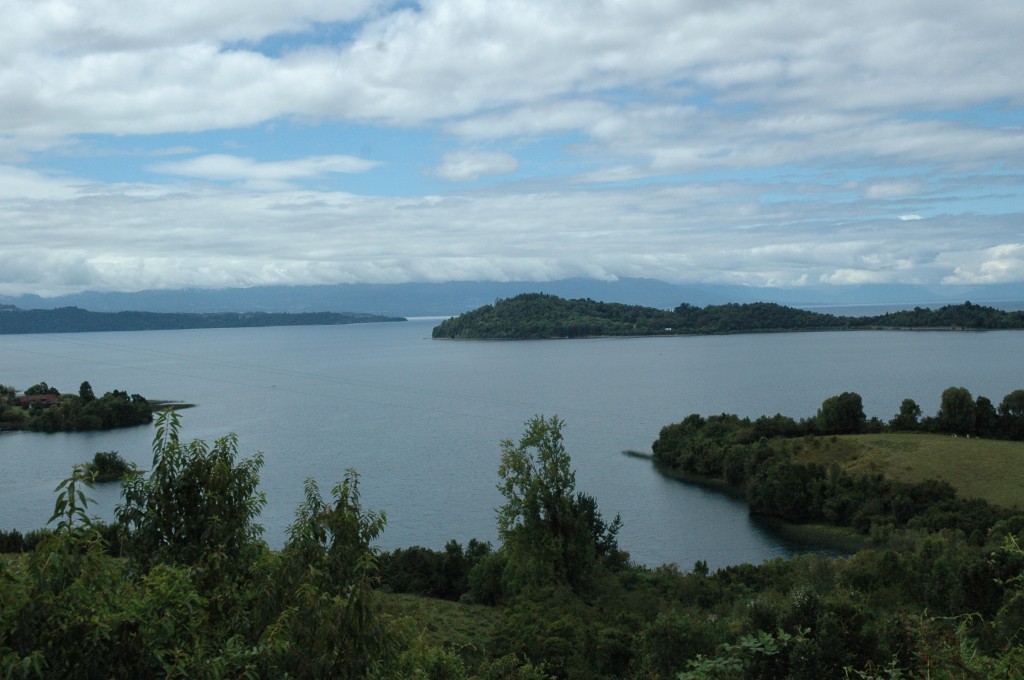 Our journey to Quinchao proved to be as fascinating as the destination itself. We passed through so many communities and regions that merited their own exploration that they will remain in our thoughts for future travels. 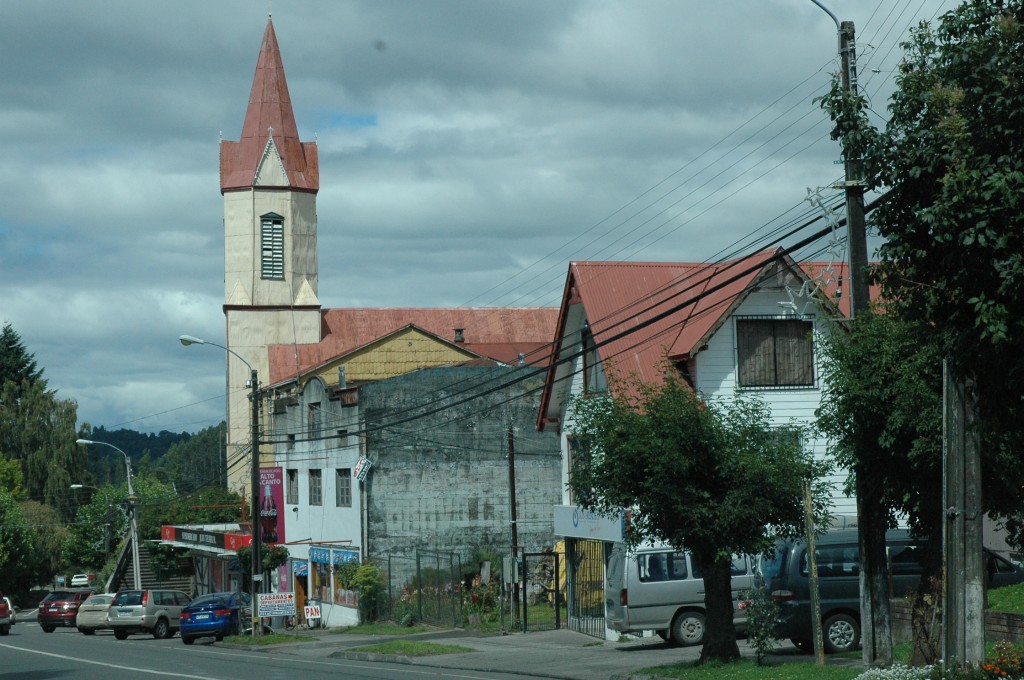 One community that was particularly delightful was Puerto Octay, located on the shore of Lago LLanquihue (pronounced Jon-key-way). As we crested the hill that led into the town proper, a most intriguing church came into view. Perched high above the street, Inglesia Parroguial San Agustin, constructed in 1908, seemed to be built of painted steel panels, but turned out to be a marvelous construction of wood. Although the exterior appeared humble, the craftsmanship of the interior took my breath away. 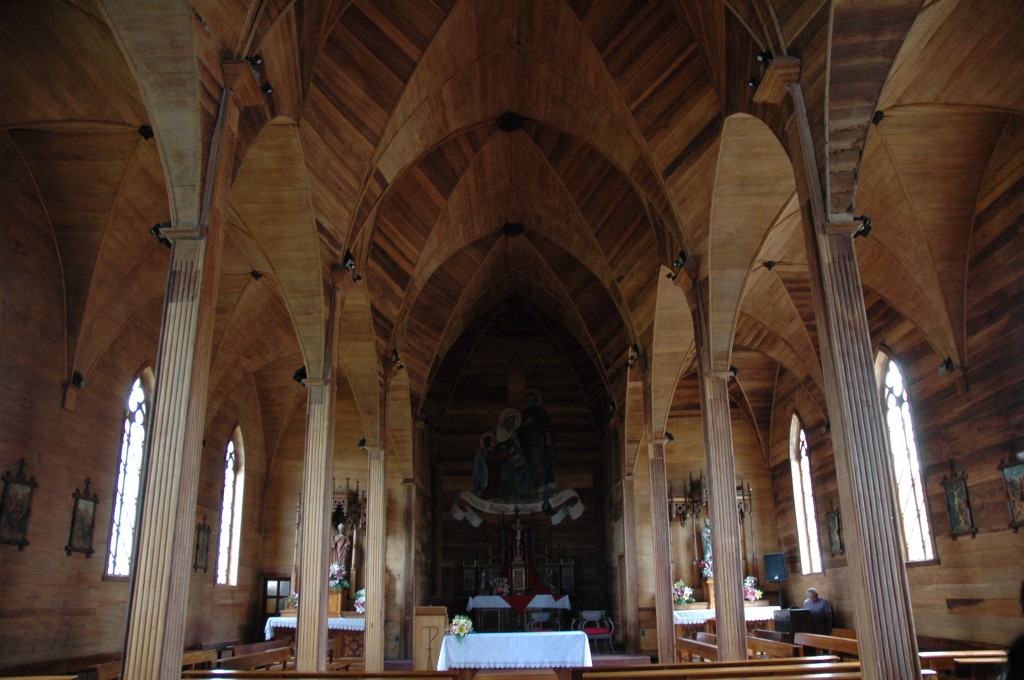 The ceiling of the sanctuary was formed of intricate arches, totally constructed from precisely cut and fitted slats of wood. Fluted wood columns lined the aisle and supported the weight of the masterpiece above. The leaded glass windows were gothic in design, each with a rosette gracing its arch, and still bore the original wavy panes. The benches were simple, straightforward, and built more for practicality than comfort. 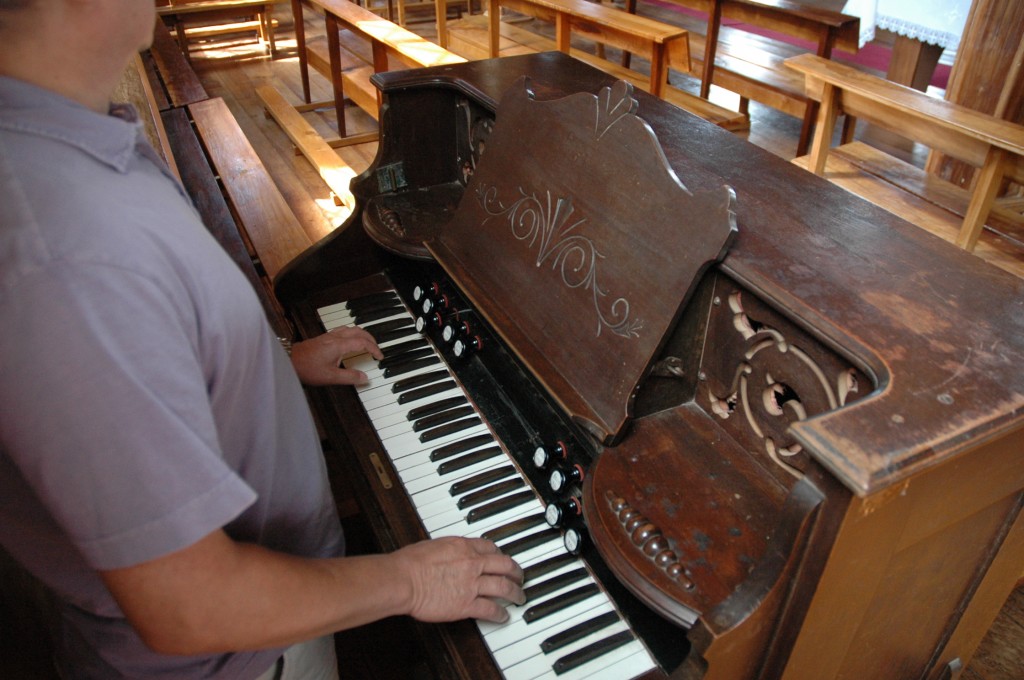 Most surprising too, was that although the church had been wired for sound, an antique pump organ held the place of musical honor. A little worn from decades of use, the keys still maintained their action, just ready and waiting upon the action of well-exercised feet. While so many churches have embraced the digital age, it was a delight to find one that still preserved old time traditional sounds. 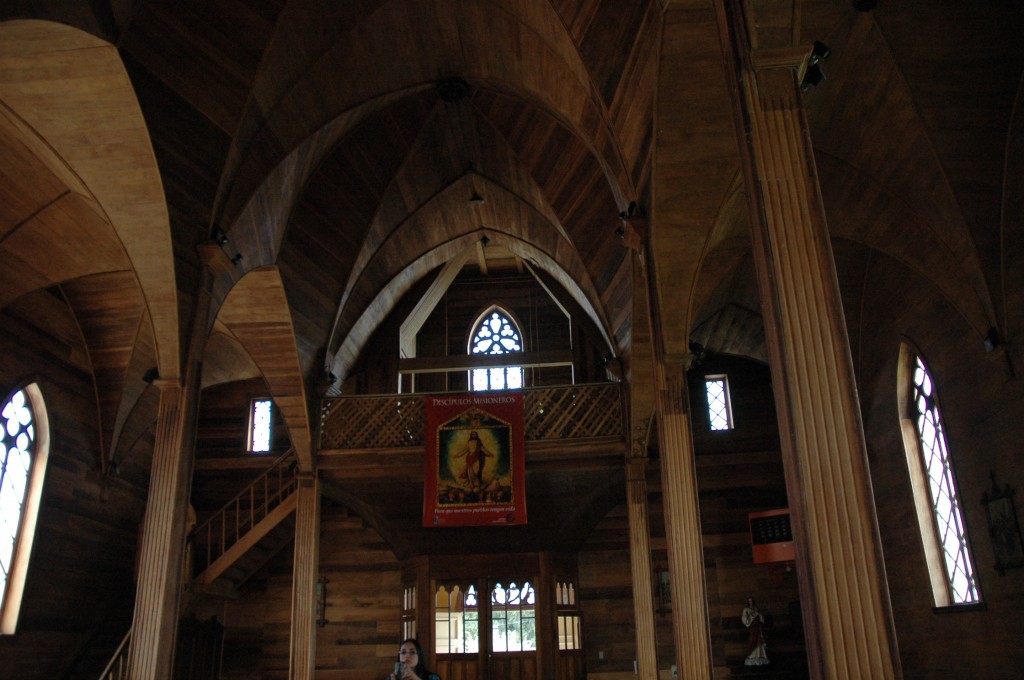 A small loft, with a lathe balcony, sat above the entrance to the church. At first it seemed to be a loft for the choir, but the light spilling through the arched window settled upon a pulley system of ropes that must have led up to the belfry that housed the church bell.

If we were not in a hurry to reach Quinchao in time for the festival, I would have sat in one of the pews for a while to immerse myself in the hushed embrace of the arches and wood. The quietude was perfect for meditative prayer and communion. 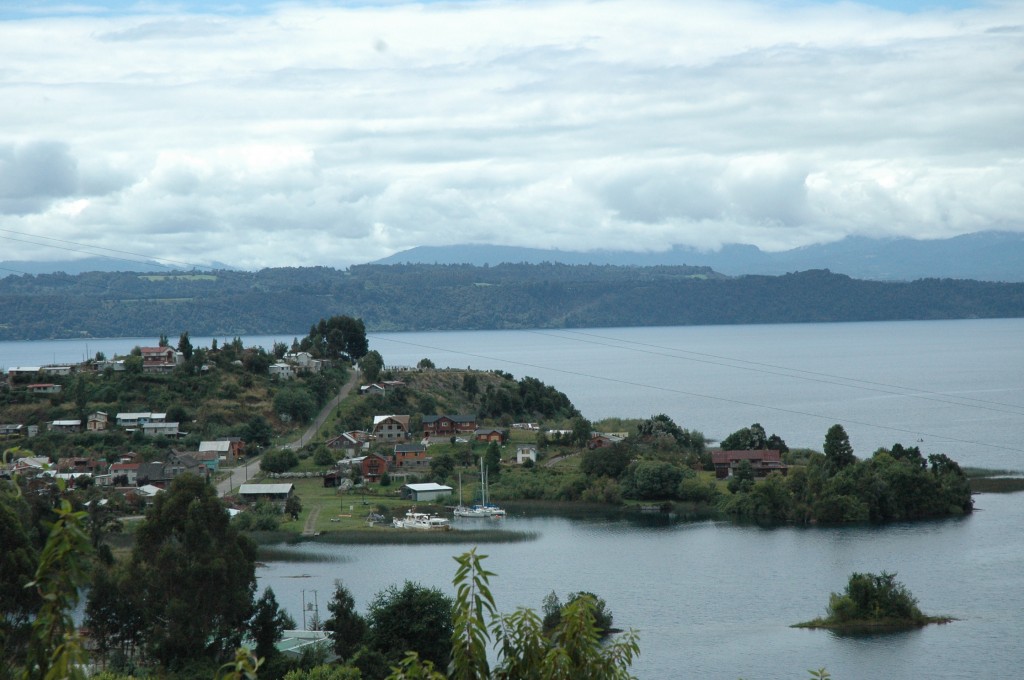 Before leaving Puerto Octay behind, we stopped to appreciate the beauty of the lake and community from a vista sponsored by the Rotary International. A placket placed on a boulder boasted the one hundred plus years of its service to communities world-wide, with a date of February 23, 1905 carved on the wooden sign. Also added was the founding of the Puerto Octay Rotary Club on June 6, 1956.

From this point overlooking the town and lake, one could count the eight bays from which the community derived its name. Even though the skies were overcast with clouds, the lushness of the hills, the curving coastline, and blue waters of the lake were a treasure to behold.

It would have been a delight to end our journeys there, but we had commitments further south, and would have to return to Puerto Octay another day. Without question, the charm of the sleepy community, replete with Bavarian style homes, restaurants, and bakeries will one day lure us back for a weekend getaway from the noisier city life in Concepcion. 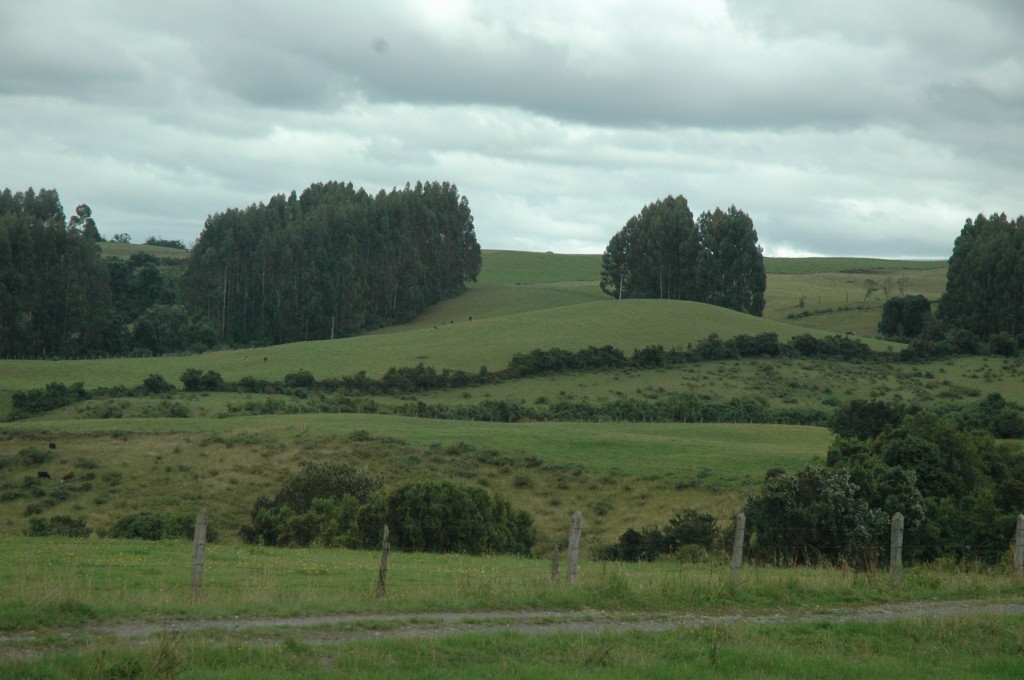 While it would have been faster to travel down to Puerto Montt by Highway 5, we chose the roads lesser taken. From Puerto Octay, we drove through countryside with softly undulating hills that folded into another. Equally as charming were the farms, barns and shingled houses that decorated the green hillsides. Large weathered barns spoke of the active farm life from which many Chilean families still operate and receive their sustenance.

After the green lushness of the region surrounding Lago Llanquihue, entering the urbanized, commercialized flatness that led past Puerto Montt down to Pargua, and the ferry that would take us Chiloe, was a bit of shock. I longed for the soothing reverie of the countryside that had been left behind, but nevertheless anticipated what sights were yet to come.

We drove bumper to bumper all the way own to the ramp that would funnel cars, trucks and pedestrians onto massive, steel transports to the other side of Canal Chacao, where the point of Chiloe lay. Although several ferries were running, we had a brief wait, and were able to stretch our land legs before applying them to churning canal waters.

One colorfully painted ferry that was unloading displayed the name, Cruz del Sur II (Southern Cross II), and hailed originally from Valparaiso, another port city northeast of Santiago. It was a long way from home, and I pondered how it found its employment so far south. Although that was never revealed, we did have the pleasure of being its next cargo. 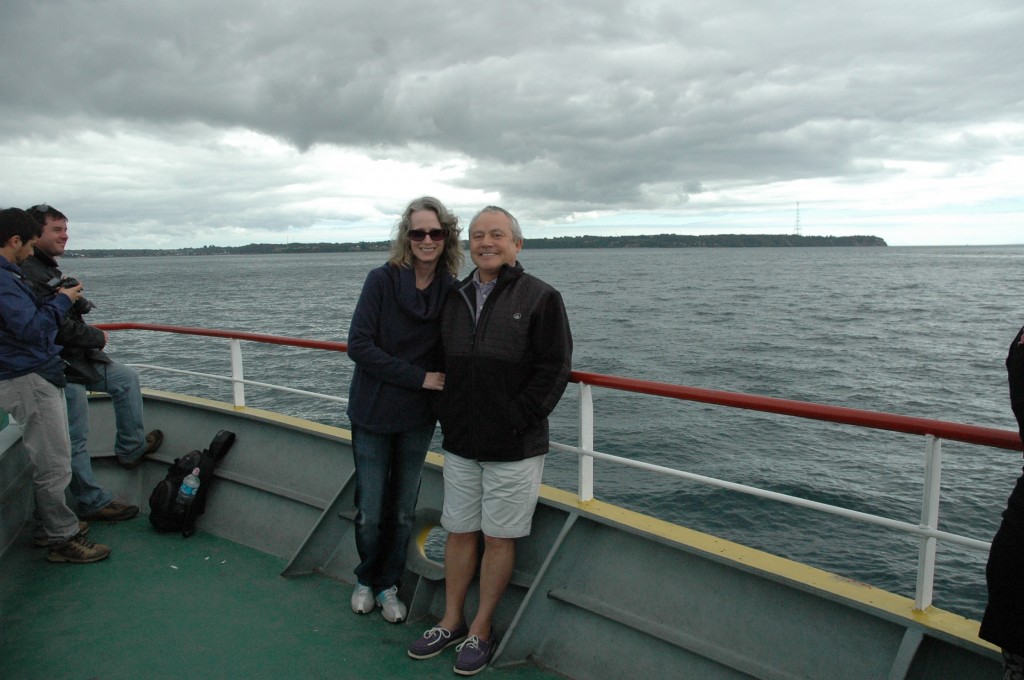 Standing upon the bridge, feeling the cold, salty wind upon my face and the rolling waves under my feet, I could feel my Celtic heritage rise to the surface of my being. Whether it is genetic or soul memory, being near bodies of water has always held sway in my life. There is a compulsion to be near or in the water as much as possible, in spite of childhood fears from a near drowning. Perhaps it is just the moth to light syndrome, but there is never enough time spent in its presence.

Dark grey clouds swirled overhead, and they seemed ever present in our travels. Yet they seemed to add just the right touch of moody ambience that imbued a womb-like warmth to the crossing. Just as a baby, we would be borne onto the other side, to experience a life unlike that we had previously known.

It was amazing to see the amount of weight and variety of vehicles the ferries could carry. Our Jeep Cherokee seemed like a little fish among the whales of semi-trucks and buses that also found passage. The ferries were the islands’ lifeblood link to the mainland, and provided transport of all that was need for daily life. 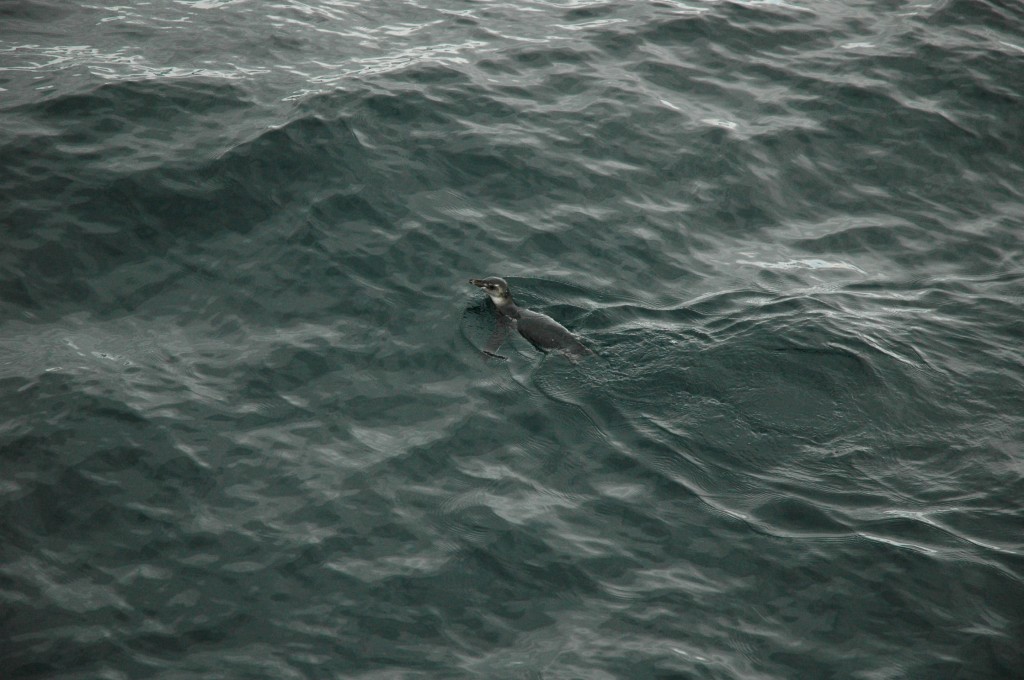 We were not alone and unprotected in our crossing over turbulent waters. Porpoises and ducks accompanied the ferries along the way. It is awe-inspiring to contemplate how these small creatures have claimed the cold and rough waters as their own.

As we approached the shore of Chacao, the ferry began to drop its ramp in preparation of disembarking passengers and vehicles. It was a little disconcerting to have the channel water openly displayed before actually reaching the other side, but it was all in a days work and perfectly normal to the crew managing the passage. 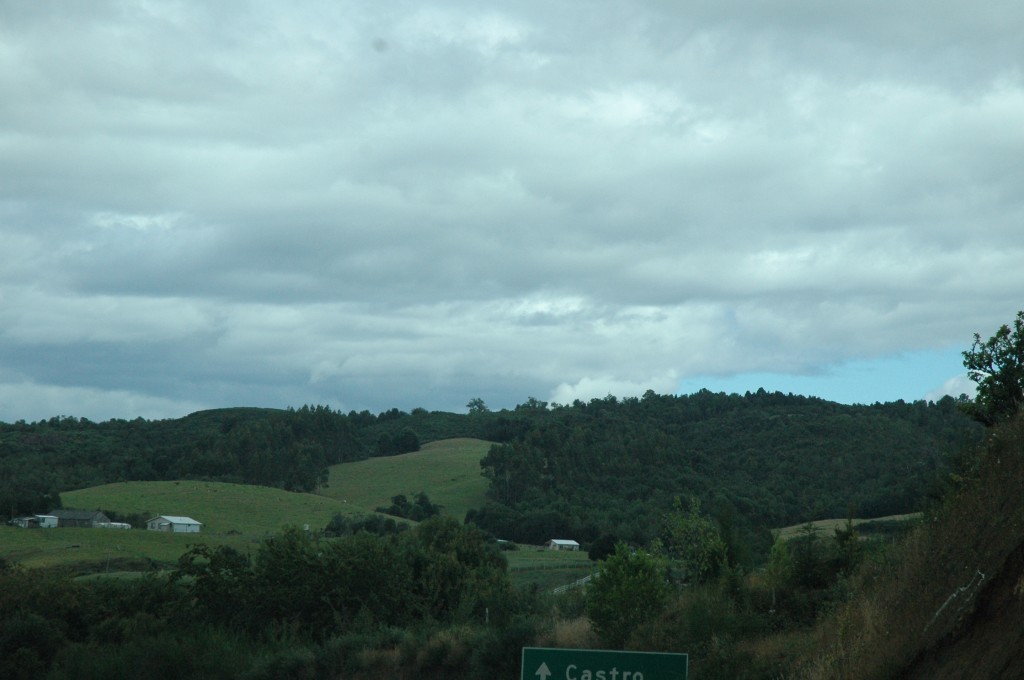 Once island-side, we continued on Route 5, driving past Ancud, Chiloe’s second largest city, to the mid-eastern coast where we would take the last ferry ride for this part of the journey. Along the way, grey clouds still loomed overhead, making the verdant rolling hills seem a little forlorn. One could feel the quiet isolation of the houses that randomly dotted the gentle peaks. 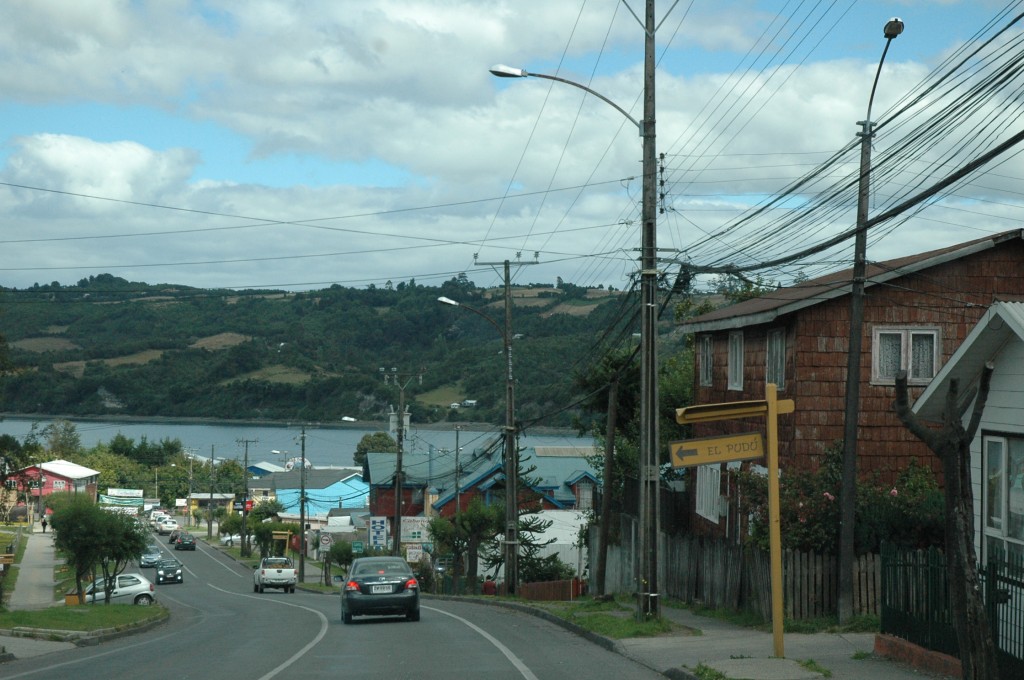 As we descended the hill into the port city of Dalcuhue, the skies began to reveal shades of bright blue and light. We could see the Island of Quinchao across a narrow band of water, and were relieved to know that it wouldn’t be long before we reach our final destination, the small community of Achao.