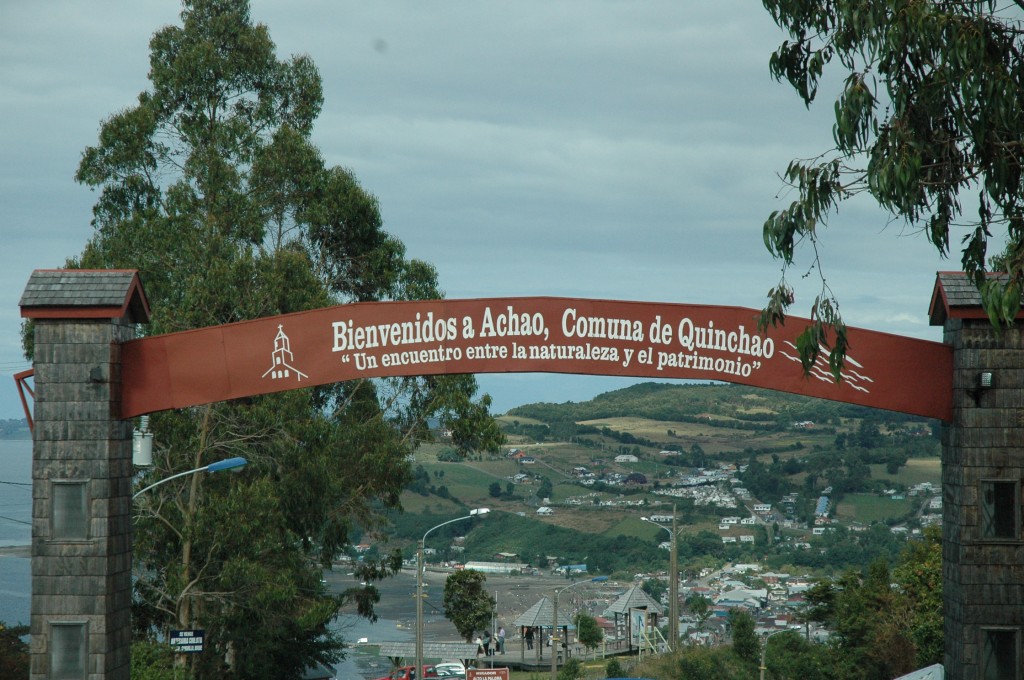 On the heels of the earthquake in the north, and the massive fire that ravaged the hillsides of Valporaiso, it seemed a bit shallow to write about the frolics and pleasures of the summer’s travels. However, with the passage of time and much contemplation, I have come to realize that the joyful and humor-filled spirit of people in Chile is the direct result of nature’s, and indeed poverty’s, trial and tribulations. Instead of wallowing in the miseries of what had befallen, Chileans worked together to clear the debris, donate goods and services, set up food and shelter stations, provide distracting entertainment for the traumatized children, hold fund raisers, and get on with the living of life. In the midst of tears and anguish, Chileans found ways to celebrate life with every available opportunity.

The fair to which we pilgrimaged represented Achao´s weeklong celebration 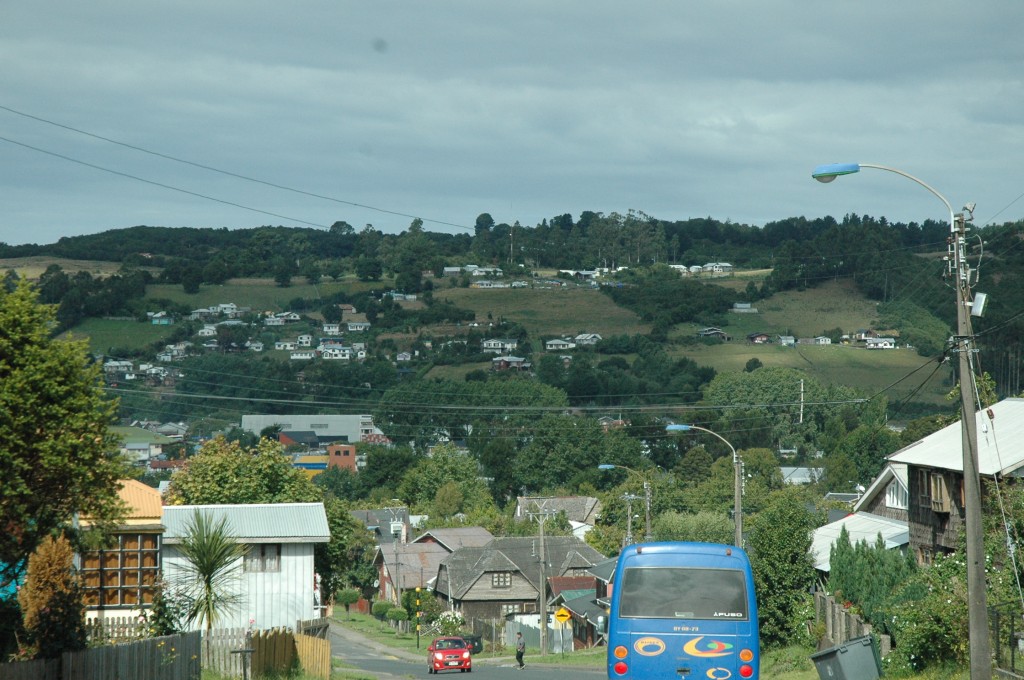 of folklore, folk music, folk food, folk wares and folk life on the tiny island of Quinchao. One among many smaller islands between the eastern coast of the Island of Chiloe and mainland Chile, Quinchao comprises 135 square kilometers (about 53 sq. miles) of lush rolling hills dotted with herds of sheep, beautiful vistas of the sea, nationally protected churches, charmingly weathered shingle houses, and five “major” communities that together with surrounding countryside boasts of population of about 12,000. Although small in size and seemingly at the edge of the world, the merits of its fair and music festivals, as well as its charming sea-centered life, seemed to be renown to all corners of Chile. 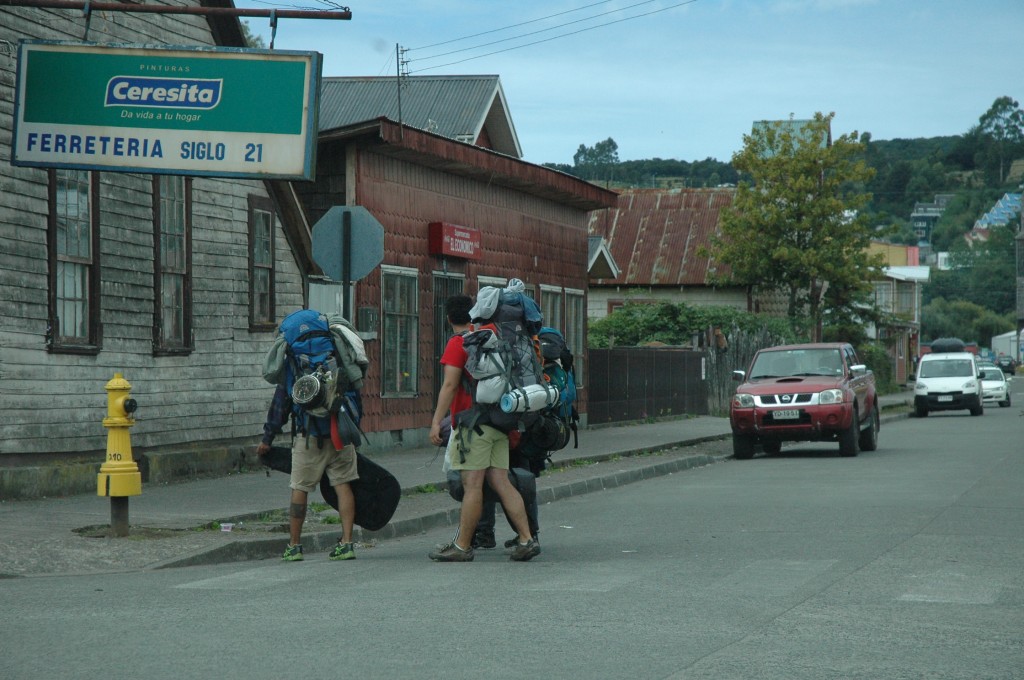 Young adults flocked from all over, swelling the tiny community to maximum capacity. They arrived by buses, cars, bikes and foot, carrying backpack and bedrolls, with plans to rent rooms, pitch tents, or crash wherever couch or floor space was available. Some just planned to stay awake and party until the buses began to run the following morning. In some ways, it was reminiscent of Woodstock or San Francisco’s Haight-Asbury during the 1960’s, except that it wasn’t rock and roll that they sought, but the rock of Chilean traditions. 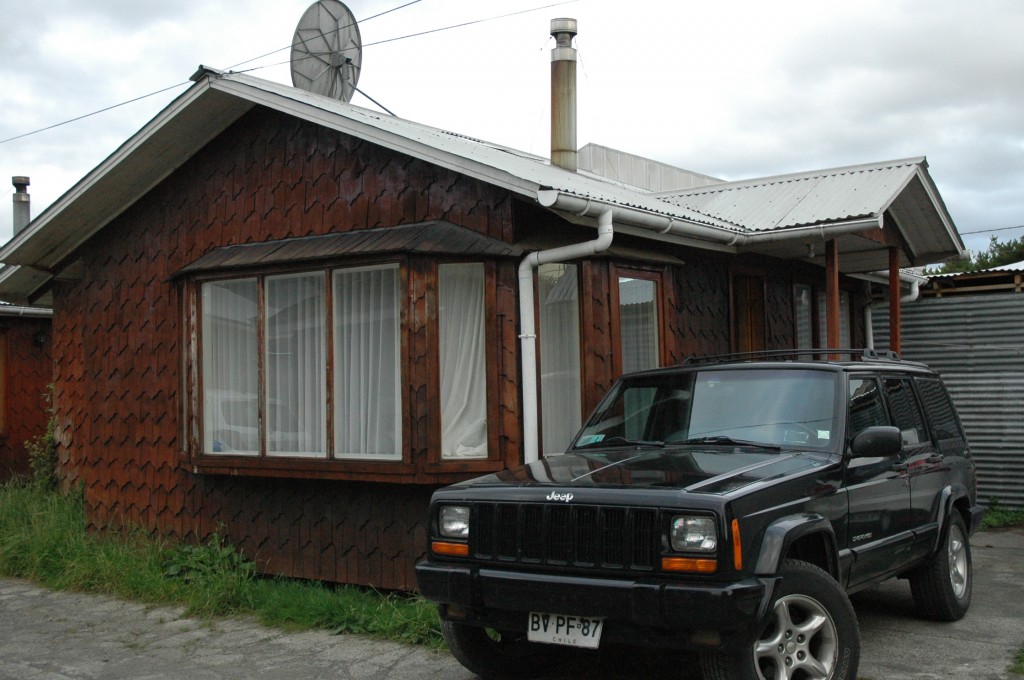 Our friends had rented a small cottage, which had an Alice in Wonderland quality, for it appeared to be much bigger on the inside that it was on the outside. Simply furnished and covered in the shingle style unique to Chiloe (compared to the rest of Chile), there was one large room that served as kitchen, dining and living, with two small bedrooms, bath and storage room leading off the back corner. Although there were more occupants staying in the petit cottage than sleeping quarters allowed, no one seemed concerned. What mattered more was being together, being at the festival, having a good time, and whatever challenges remained would be worked out later.

The fair grounds, itself, also resonated with metaphysical traces, as I felt myself transported back to my own childhood, when summers in the US were all about community festivals and firemen’s picnics. With the hindsight of maturity and the passage of time, I reveled in appreciation of the innocent and carefree times that we had once lived. Children did not need the constant chaperoning of parents, nor risk suspect of negligence or abuse by being given some free rein, for indeed everyone in the community represented watchful and protective eyes. It was a time when everyone was their brother’s and their brother’s children’s keeper. 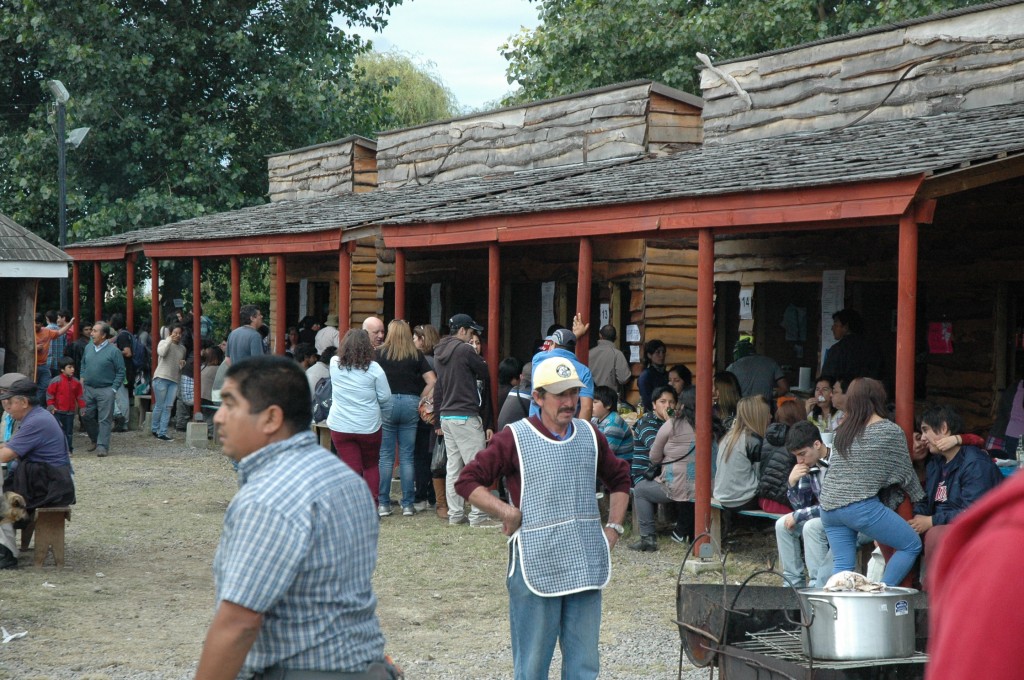 The Achao fair was far removed from the electronic glitz and glitter that seems to proliferate modern day life. Shelters for food vendors were simple rustic wood structures, with front counters, a small kitchen work area in back, and an overhang under which sat long, plank board picnic tables. Families initially commandeered the tables to feast upon a vast array of traditional dishes common to Chiloe and even particular to the island of Quinchao. Later in the afternoon and early evening, young and young-at-heart adults replaced families, and provided the reinforcement of spirit needed to keep the festival running into the next day’s early dawn. 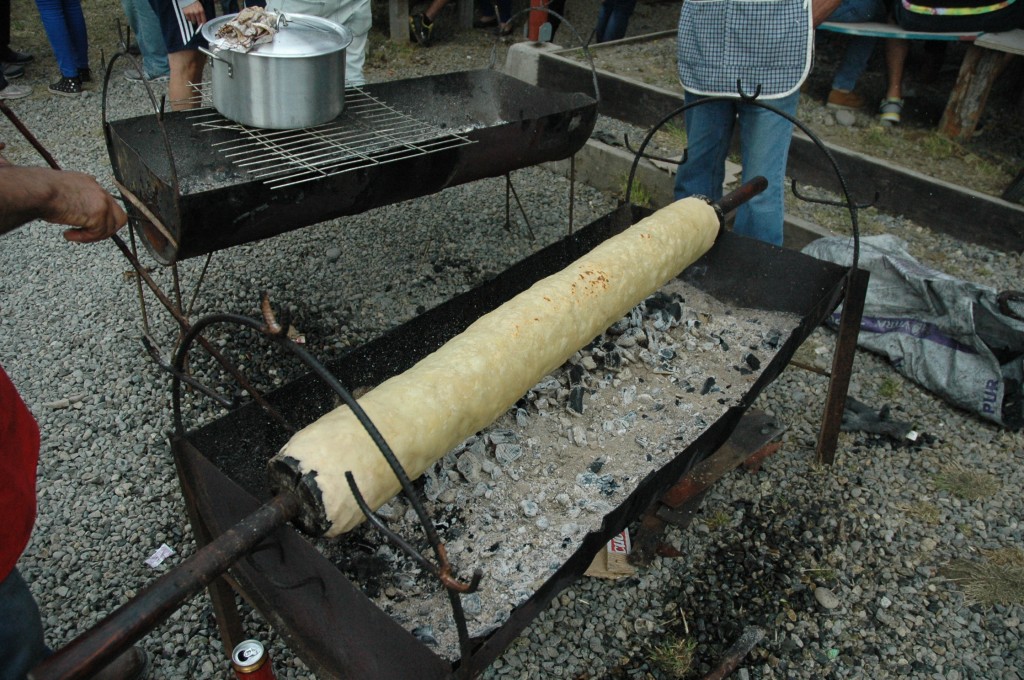 The preparation of many of the dishes was as fascinating as the variety. One dish in particular, the chochoca, initially involved plastering a potato-based dough around a long iron cylinder, which was then suspended over a fire. The cylinder was slowly rotated around and around until the dough had been baked to a solid consistency. The cylinder was then transported back to the kitchen, where the staff removed the dough in slices. Chicarrones (deep fried cubes of pork fat) was spread across the dough, and was served folded into thirds. While sampling this dish, I wondered what had precipitated the creation of this dish, and just exactly what the very first cylinder had functioned as in its previous life. Necessity was obviously the mother of this culinary invention. 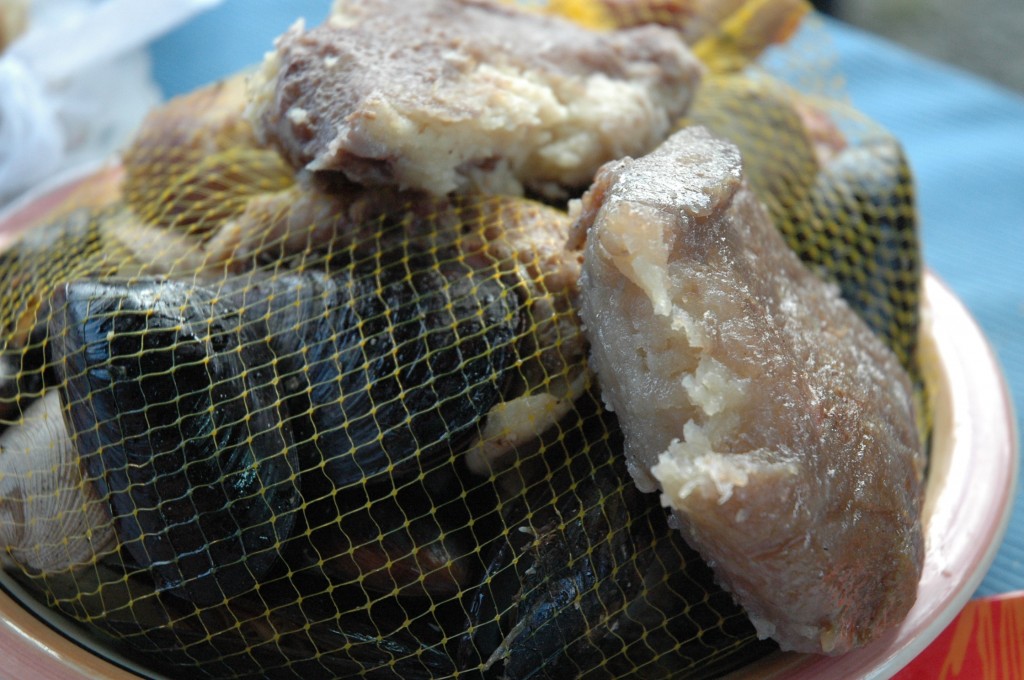 Another savory offering that caught my attention was the pulmay. This is a slow cooked pot stew of various shellfish, including clams, mussels, oysters, picorocos (barnacles), potatoes, sausages, smoked pork, fava beans, and potato dumplings (called milcao). Later in our travels, we were invited to its sister rendition, the curanto, which is cooked in an earthen pit, much like a Hawaiian kalua.

One large food pavillion had full carcasses of meat, sans refrigeration, hanging on display. Every stand featured its own version of asado (grilled meat). Charcoal grills, filled with various cuts, lined the perimeter of the gravel courtyard, and served to entice prospective hungry patrons to their respective stands. In spite of the hard work, the grill chefs were not without the creature comforts, as noted by the Chilean wines, piscola (pisco and coca cola), and chicha de manzana (Chilean hard apple cider) that leaned beside parrilla legs. It was a festival after all. 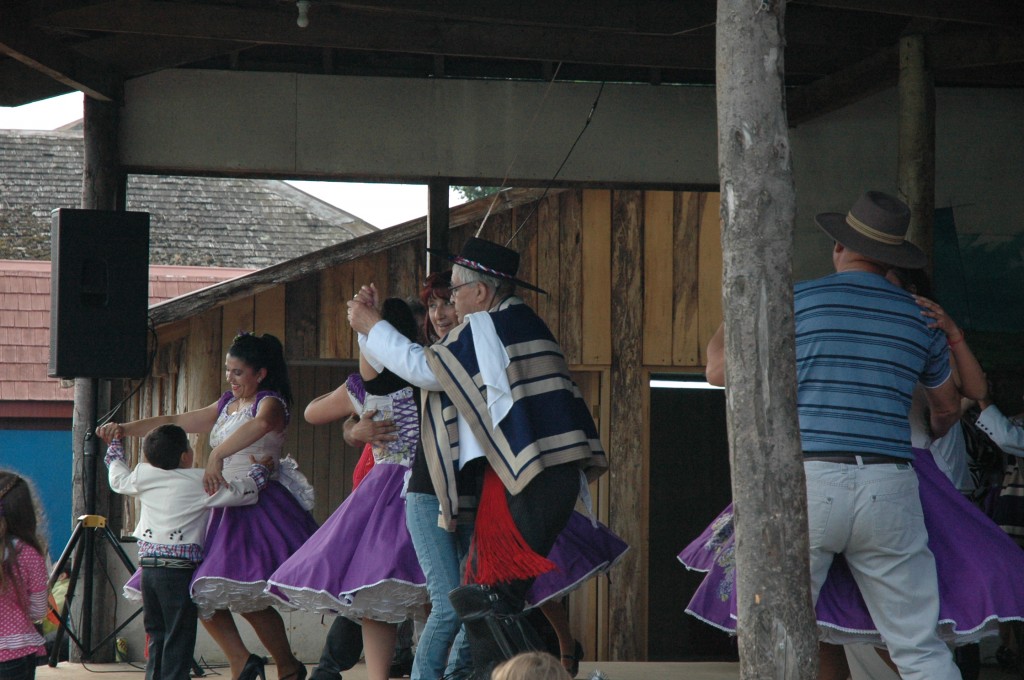 Near the entrance of the festival grounds stood a large stage upon which many different groups displayed their skill in traditional dance. Although the cueca has been official national dance since 1979, each region has its own version. Costumes and steps were reflective of many regional differences.

Perhaps one of the most surprising aspects of the fair was the lack of heavy commercialism and touristy merchandising. There were only a few stands that sold wares, most of which were locally handcrafted and even locally grown, as was the case with the hand-knitted hats, scarfs and sweaters.

In addition to the fair grounds, an evening of musical and dance presentations were held in a communal building just down the street. For the price of $2000 pesos (if memory serves me correctly…may have been as low as $1000 pesos), or about $4 USD, we were treated to entertainment brought in from many parts of Chile. The caliber of the show was both impressive and unexpected. It proved to be the perfect end to our day of long travel and festivities. 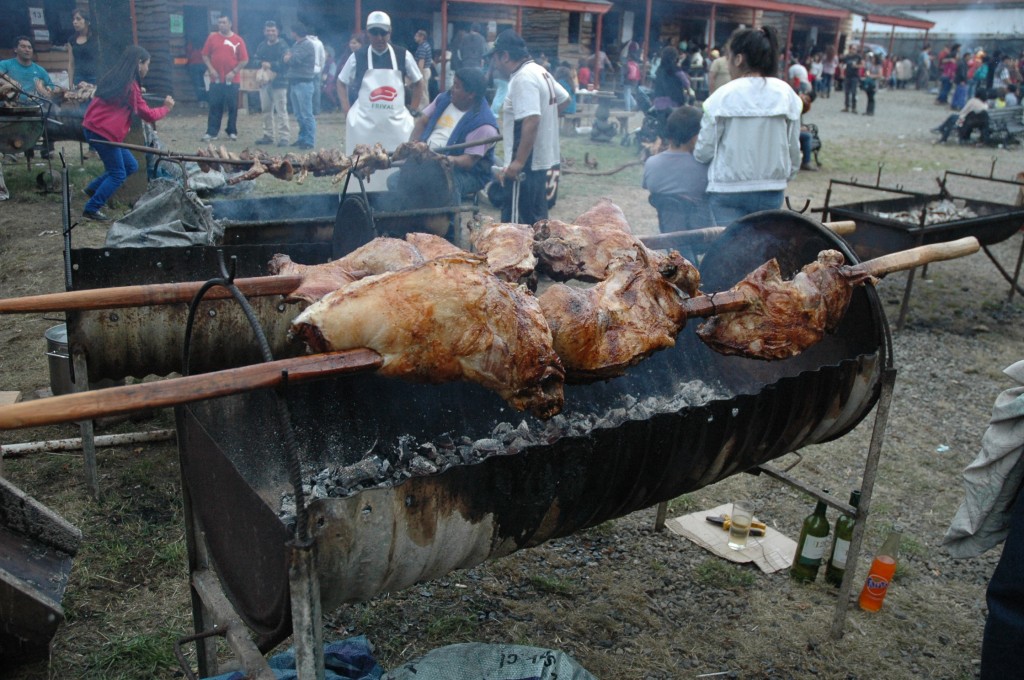 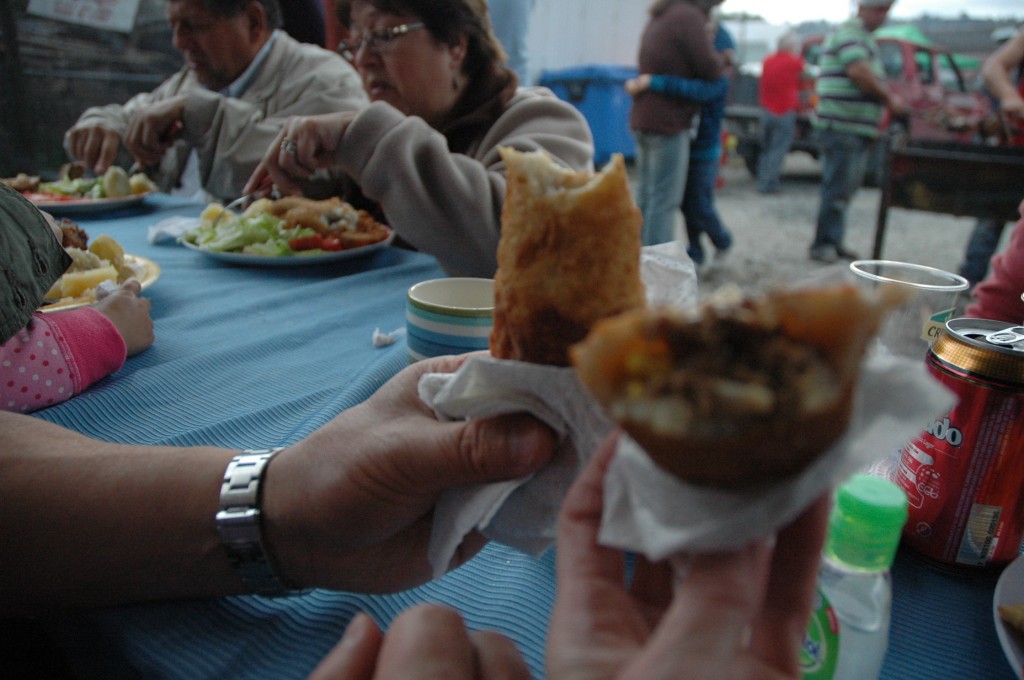 Fish platter sold out before we finished our first bite 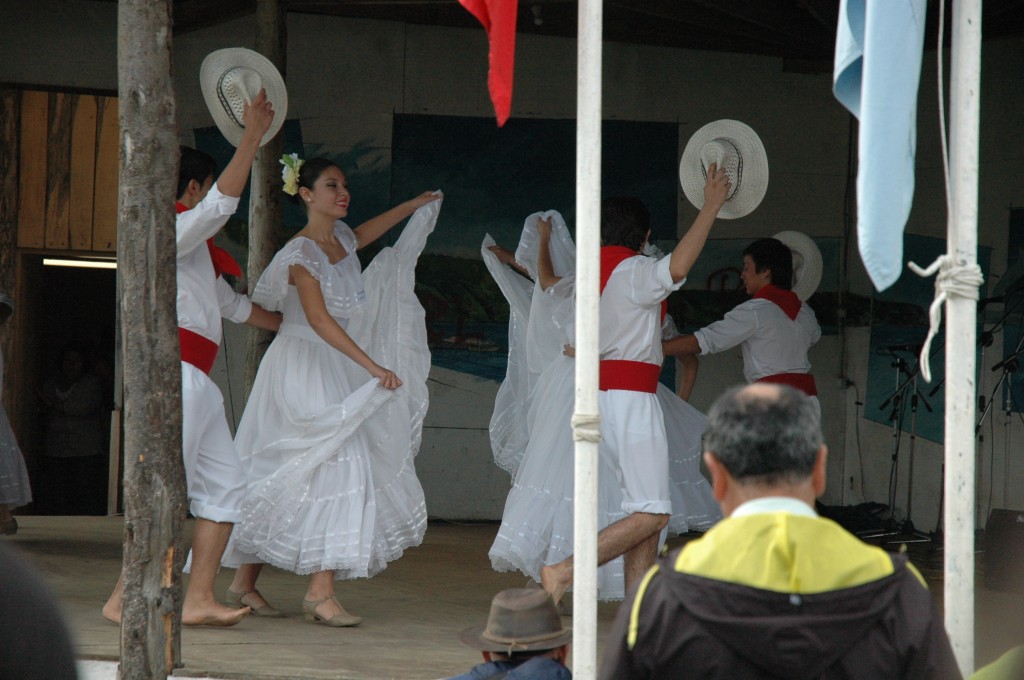 Another of the many dance performances 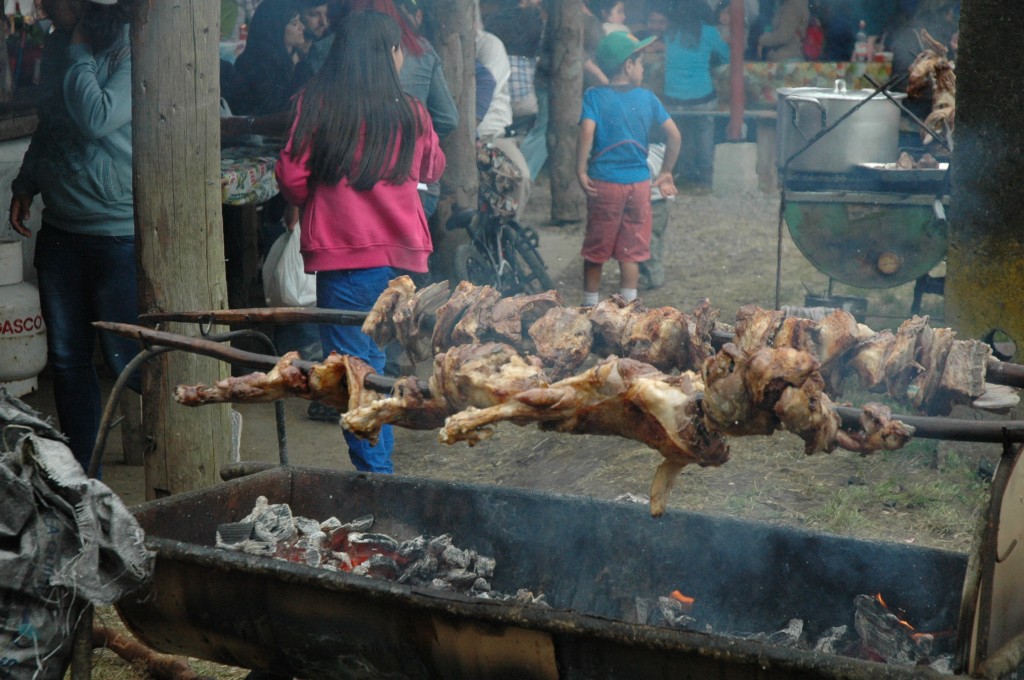 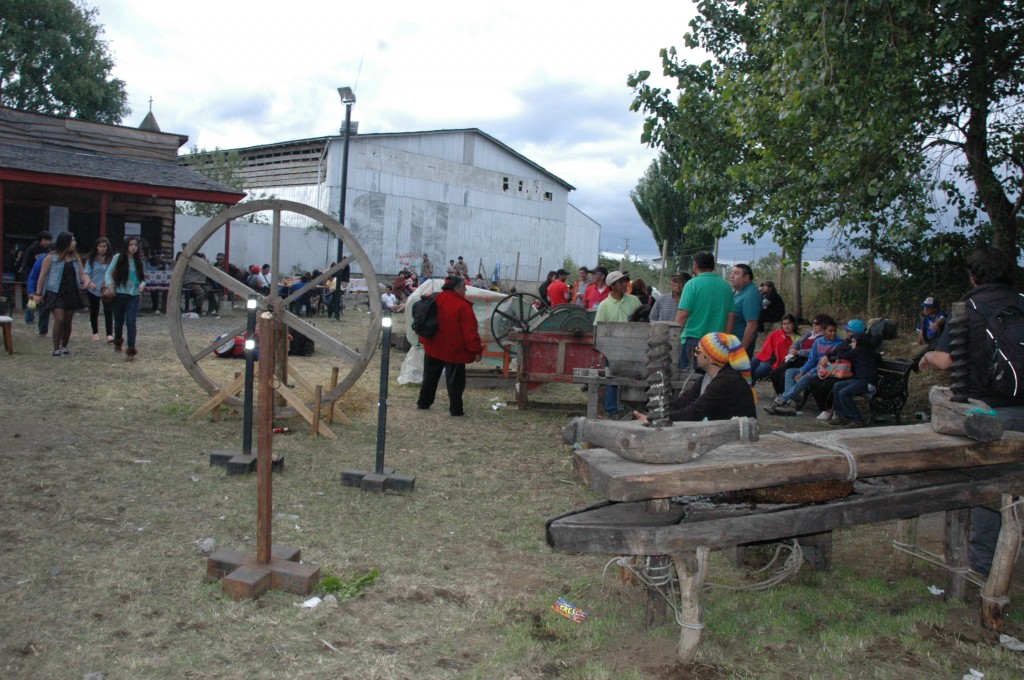 Back of the fairgrounds, where the men seem to congregate 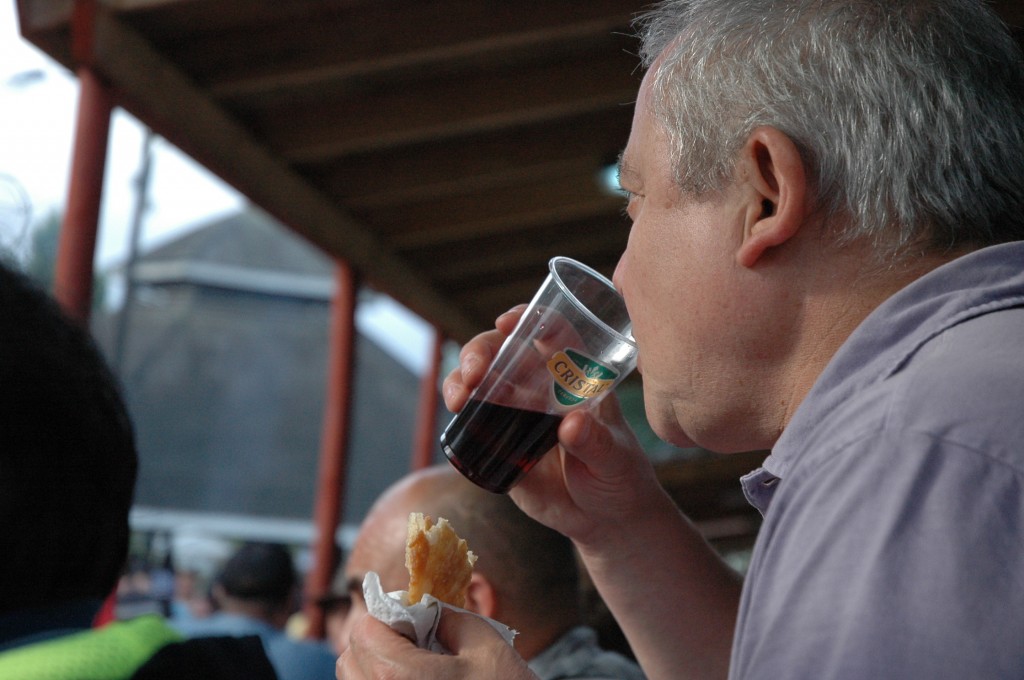 Beer and a bite 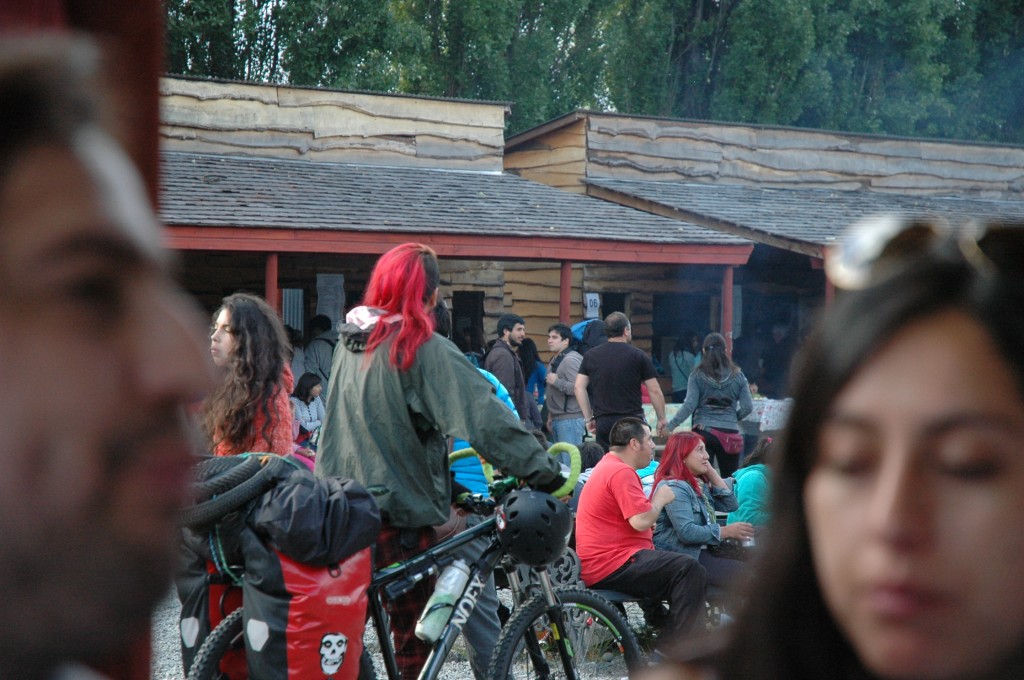 The fair may have been traditional, but the guests came from all walks of Chile 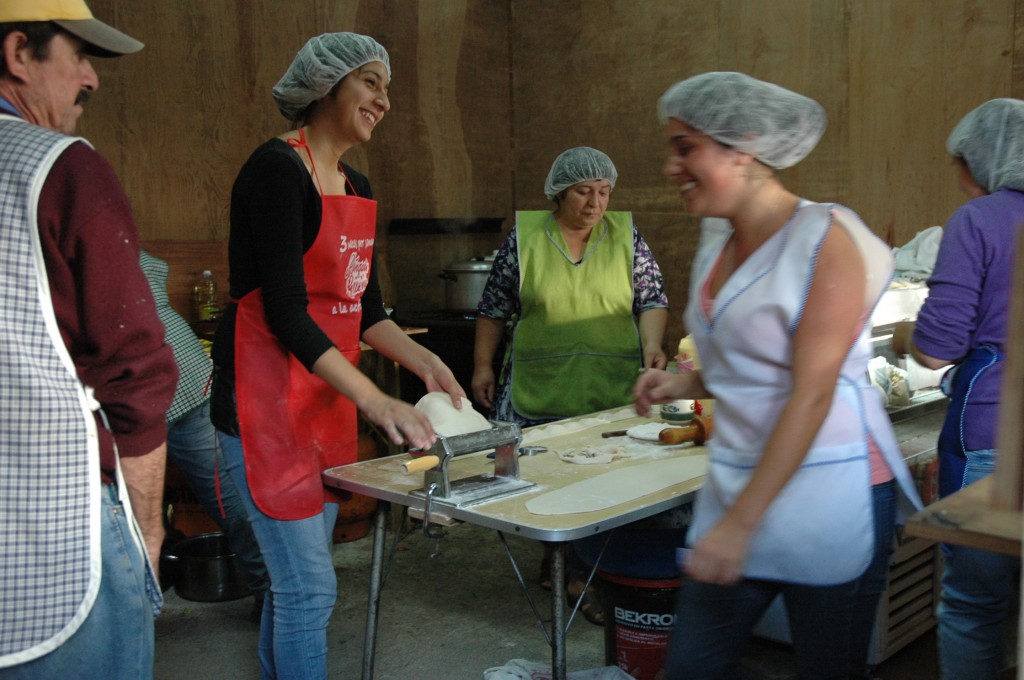 Women worked hard in the kitchen, while the men manned the grills