Many times the best vacations are the ones that begin without definite plans. When one of our favorite destinations was booked for most of February, we were at a loss of what to do with the month that lay ahead. The normal rhythm of going to the office was interrupted by summer recess, and our university neighborhood had turned into a ghost town. For the first couple of days, life around the barrio had taken on a Rod Sterling eeriness. Gone were the sounds of cars, dogs and students. The streets and sidewalks were devoid of human life, and it was a little unnerving to walk Teddy and Missy is such silence.

We were stuck in an indecisive limbo, unable to commit to any destination or activity. It seemed as if vacation had approached too abruptly, leaving unpreparedness in its wake. For a time, lethargy held its sway.

Our slumber was finally awakened with an invitation from young friends to join them for an overnighter to Island of Quinchao, off the coast of Chiloe (another Chilean island).  Every year, the community of Achao is host to a festival of down-home, goodtime Chilean music, dance and traditional local foods. Surprisingly, this simple, small town fair is a major attraction to young adults from all over Chile. They arrive by buses, cars and hitchhiking to partake in exuberant celebration, swelling the tiny community to maximum capacity.

The first leg of our journey was to spend the night in Puyehue, before pressing on to the southern tier of Chile. We would stay with the family of Connie, one of our young friends, and then leave early for the long drive to outside of Puerto Montt where we would pick up a ferry, or should I say, the ferry would pick us up, car and all, to transport our group to Chacao, Chiloe. From there we would drive to Dalcahue, where yet another ferry boat would transport us to Quinchao. 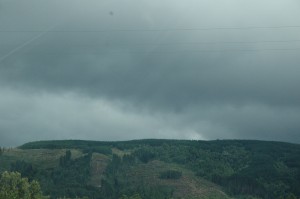 On the drive to Puyehue, a massive front of clouds crawled across the horizon. By the time we had reached the turnoff for Pucon to pick up the last of our passengers, rain had begun to drizzle down, turning the skies grey and moody. The clouds were so heavy with rain that their soft underbellies seemed to drag along the tops of hills in the near distance. 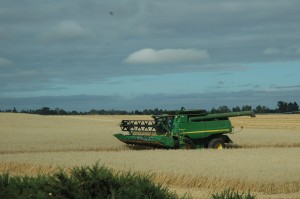 Fields were flush with waving stems of wheat, which provided the gold that was missing from the day. Thrashers sat idle, awaiting the next break in the weather. Even as temperatures dipped, and the realization that our umbrellas were still in the apartment, propped in the corner near the front door, out temperaments stayed buoyed with anticipation of new sights and adventures. The anticipation of a grilled lamb for dinner also provided the encouragement to press onward.

The farm sat perched on hills that overlooked Lake Puyehue and rolled gently down to a sandy black shore. A house 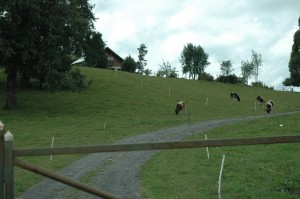 reminiscent of Bavaria peeked over the crest of one hill, while cattle dined contentedly along either side of the drive. Overhead, blue skies were sparingly revealed behind massive, cumulus clouds.

A menagerie of dogs raced down the hill to determine whether we were friend or foe. Connie warned that they were working dogs, and not like the two humans-in-training we had at home. For a time, we were cautious until properly inspected and passed with approval. 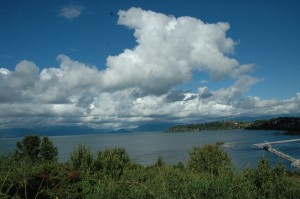 Connie’s parents and her younger brother lived in a second house towards the back of the first hill, and had an impressive view of not only the lake, but also the community of Entre Lagos, and two volcanos, Vulcon Puyehue and Vulcon Osorno. It wouldn’t be until our trip back that the beauty of the view would be free from cloudy obstruction. For the time being, we were content to just take in the magnificence of the lake.

Proponents of the small house movement would have appreciated the coziness of the family’s home. The living and dining were combined, with a small kitchen, one bath and two bedrooms. A small wood burning stove in the living area, as well as wood burning cook stove, that sat adjacent to a gas one in the kitchen, provided warmth during the cold winter months. The benefits of living in a small house were very apparent in this very close, loving family. When there isn’t another part of the house to escape to, family members learn to cooperate, compensate and compromise. It is presence and not absence that make hearts grow fonder.

Lunch had been waiting our arrival, and we sat down to dine on a first course of caldillo, a hearty soup of veggies and meat, followed by a second course of meat or chicken with potatoes and salads.  As is typical of most Chilean meals, the wine flowed as much as did the conversation.

While the television is often the main focus of many westernized homes, in Chile, the table is the most important feature of a home. Families and friends gather around the table for meals and to share what is going on in their lives and in the world. Nothing on television can compare to the interactions of living voices and minds. The only real exception to this is when it’s the World Cup or someone’s favorite soccer team (football in most countries) is playing. That’s a gathering of a completely different nature! 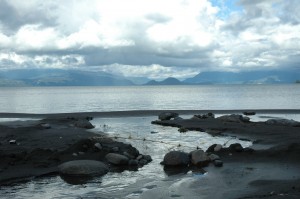 While still under the glow of superb fruits of the vine and with sated stomachs, our merry entourage took a stroll along the shore of the Lake Puyehue. The lake, in complement to the weather, was a little turbulent and moody. Clouds blanketed the sky, casting a blue haze upon the hills in the distance, and the vista was reminiscent of mountains in Japan. Rippling waves in the lake created an impressionistic reflection of the view. 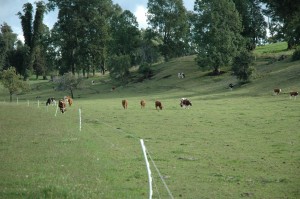 grazing. A thin wire fence separated the cattle from the banks of the lake, and my mate made the unfortunate mistake of touching what turned out to be electrified fence. Fortunately, the jolt was mild enough to not sustain an injury, but strong enough to remind the cattle of the barrier.

Young calves pranced along side their moms, while the adults partook

of the verdant grasses growing upon the sloping hills. It seemed surreal to stand in the middle of the pasture with both bucolic views of the farm, and majestic views of lake. It was easy to envy the cattle for their prime grazing grounds and views.

As the day continued, the skies surrendered its billowy pillows of clouds, allowing the sun to fully reign over the rolling hills. A soft breezed caressed our faces as we strode across the meadows. We eventually crossed the farm to the other side of the street to explore the 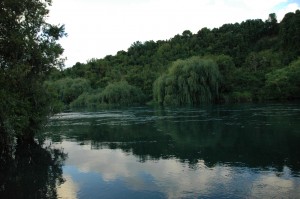 river that flowed into the lake. Massive willow trees, called Sauces (pronounced sow-sez), lined the river, with their slender, feathery branches draping the banks. Hawks took flight across the water with the sounds of our approaching feet and laughter.

With the waning of the sun, we walked back to the family’s house on the hill to partake in a leisurely dinner that would last until the predawn hours before we wearily and contented found our places to rest. The next day would begin the journey to Quinchao, and although not planned, would catapult our group into a nearly two-week adventure around the southern region of Chile.