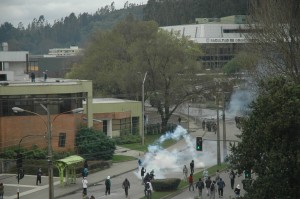 You’ve gotta stand for something,

Or you’re gonna fall for anything…

The past days have been grey and bleak, appropriately capturing the mood of the nation. Several months of talks, high school and university takeovers, hunger strikes, peaceful marches, and not-so-peaceful riots have failed to bring resolution to use of public funds and application of the law. With the sounds of two days of conflict ringing in my ears, my mind continues to ponder what induces government officials to turn deaf ears to the majority will of the people, especially when it serves to do little more than exacerbate and accelerate the violence.

As a bystander, I have to wonder where it is that chaos and anarchy really reign. The government and press would have us believe that it is with the students, union workers and others who have organized mass protests that end in violence. However, the same may also be considered of a federal government that refuses to comply with its own existing laws, is adamant about violating those laws, and allows obstinacy and political compromise to stand in the way of peaceful resolution. The adage that “nobody is right when everybody’s wrong” could ring truer in these stormy days.

As I had long feared, one student, a 16-year old boy has died in the conflict. A 9mm bullet was removed from his body during autopsy, and investigations are currently underway to determine whether it was fired from the gun of a carabinero (police officer). Newspaper websites are also televising videos of carabineros engaging in aggressive acts, such as throwing a tear gas canister into a post office where students were standing outside. The video shows young and elderly patrons being carried out from the premises, overcome with the toxic fumes.

The intendente (governor) of the BIoBio region has said that behavior of the students is similar to products of unwedded relationships (readers should think “B” word, but in it’s literal, archaic sense, and not as a swear word). Furthermore, the Minister of Health has denounced the students participating in the hunger strike as being “mariposas,” (literally, butterflies, but also a slang word for homosexuals), also stating that they were faking. Such commentary is more befitting of the 1800s, rather than statements from officials of a 21st century developed nation.

There had been hope that the new administration would be run more efficiently, as are companies in the private sector. Lately though, the dictates from the Office create the impression of being little more than an old boys network. I think that the general populous did not expect to be so quickly treated as penny stockholders.

The rain that has drenched the region for the past couple days has down wonders to wash away the tear gas, but little to remove the blemishes of turmoil. While Chile has often seemed like the Garden of Eden to me, this week it feels more like the broken promise land.