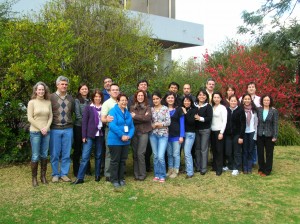 In embracing a move to Chile, I had to close many doors to my former life. The most difficult one to shut was to my position as a marketing and public relations director in oncology. It was the greatest fulfillment of my career, up to that point, and I thrived not only on the work, but also the interaction within the medical and cancer support group communities, as well as the countless hours devoted to the cancer radio program that I had created. I awakened every day with exuberance and joy, knowing that my work and efforts served to improve the lives of cancer patients. It was a mission that enraptured my soul, and no matter how taxed my time and energies were, there was somehow always more in my reserves to give.

For a long time after the move, I wandered without a sense of direction and purpose. I had lost my sense of bearings, and really didn’t know what to do with myself. I was way too young to retire to the rocking chair, albeit my favorite, and the consulting and translation work was too sporadic to satisfy my active mind.  Fortunately, the adage is true that when one door closes, another opens.

A friend who serves as a department chair at the university received an advertisement of a new master program in molecular oncology, offered through Centro de Estudios Biosanitarios and Centro Nacional de Investigaciones Oncologicas (Spain), and recognized by the European School of Oncology. It was the first of its kind to be offered in Chile, and indeed, was a new educational frontier in many countries. Although the program was geared toward physicians and those with biological science degrees, it instinctively felt like the direction I was searching for. Although a political scientist by degree, and marketing pro by trade, my life had taught me that there was little that I couldn’t achieve. In my last position, I had had only a month to become fully conversant in the clinical side of cancer. So with breathe bated, I submitted a lengthy cover letter and resumé, and waited.

In spite of being a highly untraditional student, one who had provided some debate, admittance to the program was granted. The email arrived two days after my birthday, and was one of the best gifts to have been bestowed. Although the concern of the committee had been my lack of medical degree, the real challenge that lay ahead was the Spanish language. I barely spoke a word, could only read some, and was certainly lost in oral comprehension. Nevertheless, as with the move, I leaped with both feet forward.

On the first day of class, I felt as shy and awkward as my first day in kindergarten, only I didn’t have my mother’s skirt to hide behind. Thankfully, however, I did have my mate’s humor, charm and native language skills to pave the way. Although I had expected to be the oldest in the class, I was pleased to find myself somewhere in-between. Being the only non-med, non-speaking, non-Chilena was conspicuous enough.

The initial months of classes were difficult, for my ears struggled to discern the Castellian pronunciations of Spanish, which was so very different from the Chilean, while my mind worked to absorb and digest the concepts. In spite of the hurdles, I was thrilled to have the opportunity to learn the research side of the field.

Each month, we met for approximately 15 hours of intensive classes, spread across two days. Presentations were “digi-cast,” and the powerpoint presentations were provided in hard copy. Although based in Spain, the professors were available to address questions through emails.

In addition to the classes, I also found myself doing extensive reading online, through Pubmed, as well as working through massive textbooks, to compensate for my early lingual disabilities. Google translate also became my best friend as I worked to translate the Spanish text into English.

The first exam put me into a state of panic. Although the monthly presentations were in a mix of written Spanish (primarily) and English, the exam questions themselves were completely in Spanish. My study notes were in English, and I had to first translate the questions before fishing my brain for the answers. To say that it was nerve-racking would be an understatement.

It had been a long time since I have been so intellectually challenged, and I relished the classes and the learning. However, as much as I enjoyed and appreciated the program, it was the people involved in making the program work in Chile, as well as my fellow students that made the experience wholly enriching. All made it a privilege to be part of the first generation of the molecular oncology program.

September was the last of our formal classes, and soon our work will begin on individual theses. As much as I am happy to finally begin my research and writing, I will miss the camaraderie, and shared experience in exploring intellectual horizons.