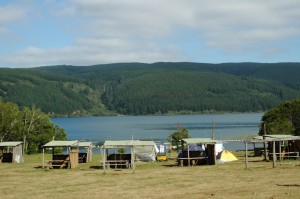 It’s been almost a year since the Great Quake, and in remembrance of our experience, we returned to camp once more on the banks of Lago Lleu Lleu.

Little had changed since February 27. Two of the docks still lay half-submerged in the water. The piers had shifted so irregularly that the camp owners were unable to rebuild the docks. The main dock was a rough version of its former self. Also, one area along the bank remained sunken, about half a foot lower than before. Other than that, the camp was functioning as normally as in the pre-quake days.

We, too, were functioning normally, at least that was our outward 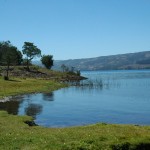 appearance. Two small tremors on our second day gave a moment’s pause to consider the prospect of packing the car, just in case. As it was, we ended up moving the tent instead.

The days passed languidly. We transitioned between sleep, eat, swim, eat, sleep, swim, play, eat, play, and sleep. I stopped wearing my watch by the third day. There was no need for man’s time for we were living by nature’s clock.

Throughout the day, we were serenaded by the sounds of the lake’s waves crashing against the bank. Children practiced their dives off the remaining dock, and I was struck by how their language had changed. Now, they shout “tsunami” as they jump into the water. 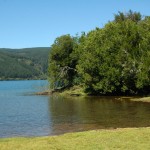 A study had recently been released regarding the impact of last year’s trauma on the children in Chile. The number of minors being treated by psychiatrists has increased dramatically when compared to statistics prior to the earthquake and tsunamis. As with soldiers returning home from war, the children, as well as many adults, are suffering from post-traumatic stress syndrome. Given Chile’s propensity for earthquakes, with major ones occurring about every 25 years or so, they are but another generation to bear the scars of the Earth’s dramatic upheavals. Few generations have ever escaped such a fate here.

One of the surprising additions to the camp this year were the number of vendors traveling to sell their wares. In the morning, dairy men called out, “leche fresca, leche fresca,” fresh milk. In the afternoon, a truck would arrive to sell freshly picked tomatoes, paltas (avocados), lettuce and other vegetables. At night, orders were taken for pan asado (raised bread) and humitas (Chile’s version of a tamale). When the humitas arrived, so did offers for cold cervesas (beer). With all of our basic needs attended to, it was very easy to step into our child within.

While slipping into my inner child, I become acquainted with three young local boys, around the ages of nine or ten, whose families lived near the camp. The three amigos, Christopher, Alejandra, and Joaquim, made a point of crossing my path every day. Christopher, whose family owned the camp, remembered me from our stay during the earthquake. We had parked in front of their house after evacuating the camp, and his father had lit a large bonfire for everyone to stay warm as we waited out the constant undulations and darkness.

Christopher, with his beginner English, and I, with my intermediate Spanish, would meet somewhere in the middle of language to talk. He originally thought that I was from Argentinean, with my long legs, green-blue eyes and blonde hair. Living close to Argentina, that was his point of reference and experience. I think that it struck his fancy that I was an Americana.

One day, he asked if he and his friends could play with our tennis rackets. It made me pause to consider the lack of worldly possession in this part of Chile. Many, especially the Mapuche (indigenous people of Chile), live in sub-substandard poverty. A dear friend who is Mapuche and a professor of sociology at the University of Concepcion, has often spoken of their economic plight. Claudio had once visited with a family so destitute that the meal offered was lard with bread. Rather than insult the family, he shared in their humble meal. As a very noble and caring man, he often takes rice, flour, sugar and other amenities when he visits Mapuche communities for his research.

My new pals have also given more credence to my desire to create some form of a book or other type of drive for Chile. There is so much waste in the United States, with items barely used being discarded. There is always something “new and improved” to attract attention and desire of consumers. It is sad that so much ends up in the trash while still bearing years of life and use.

Although it is too late for this year, I wonder if my fellow college alumnus would consider giving something away instead of up for Lent. That is a subject to introduce to Facebook discussions.

While many of Chile’s populations may lack in the material wealth so greatly prized in my former life, there is over-abundance in natural beauty and wonder. Every night, I stood mouth agape, starring at the multitude of stars. Although a lover of astronomy, I never fully understood or appreciated what was meant by the phrase, “The Milky Way, “ until I looked up at it, standing upon Chilean soil. The view was absolutely breathtaking.