Recently, we attended the wedding of dear friends, Laura and Ramon, at one of the family’s eucalyptus farms. It was a beautiful, albeit slightly sweltering day in the hills an hour outside of Concepcion. The vegetation and trees were in full summer dress. The sky was blue, and sounds of the countryside drifted in the air. It was a perfect setting for an outdoor wedding.

Enrique, father of the bride, had devoted considerable hours in overseeing the 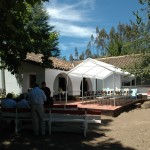 renovation of the house and grounds. Fresh coats of paint were applied to the marvelous Spanish colonial house, barn, outdoor kitchen and benches. A new gate was built to greet guests as they entered the farm. Most importantly, Enrique had finished his restoration of a 1939 Ford truck, in which to chauffeur his daughter to the wedding. It was to be a dramatic entrance. 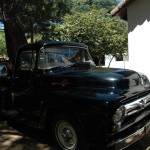 As guests arrived, waiters roamed the grounds, serving a variety of seafood canapés and traditional Chilean hors d’ouerves, such as empanadas (both mariscos and cheese). Fresh juices and pisco sour, a drink with national pride, were offered in complement. Pisco sour, made with pisco, lemon juice, sugar and topped with egg whites, is one of many sources for dispute between Chile and Peru. Both claim ownership to its creation, and although prepared slightly differently, both countries enjoy it with immense passion. For myself, I’ve come to love both versions, but have learned to exercise caution in enjoying this very potent drink.

The ceremony was held under one of the veranda arches, where stood a small table graced with flowers. 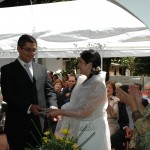 The wedding began with a civil ceremony conducted by a local judge. Upon its conclusion, the newly married couple and their witnesses signed the register. The judge then handed the groom a small book, the size of a passport, which held the certificate of marriage. Ramon handed the book to Laura, and then kissed his wife for the first time.

Following the civil ceremony, Father Pepe, who has been a long-standing friend to the family and has a parish in Hualqui, performed the religious one. Although Ramon and Laura’s harried life did not allow time for a church wedding, it was very important to this young couple to have the Church’s blessings.  Both are very devout, and had first met while participating in a church choir.

It was during Father Pepe’s ceremony that the rings were exchanged. However, as the couple wanted to wait until they were able to have a proper church ceremony, it was the parents who placed the simple gold band on the finger of their child. The parents were giving their children to one another.

The wedding concluded with a final blessing given by Father Pepe, and an introduction of the newly married couple to those who had gathered to share in the joyful occasion.

Following the ceremonies, champagne and cocktails were served outside. Then guests were invited to dine indoors at a magnificent feast of freshly grilled meats, prepared on massive grills in the summer kitchen, and traditional side dishes. Wine and wishes flowed during the celebration. After dinner drinks were served under the cool shade of the trees, and the evening concluded with once, the last meal of the day, under candlelight when the electricity generated by the nearby creek waned.