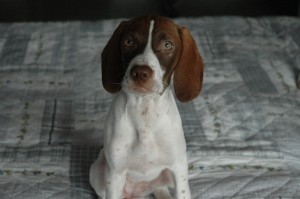 This morning, our newest addition to the household, a now 4-month old English Pointer named Missy, broke one of my favorite bowls. I had been so happy when it had survived the earthquake, for the garden scene and squirrels that romped around the perimeter reminded me so much of home. Squirrels and chipmunks, so prevalent and a daily part of my former landscape and nature tending in the U.S., are not among the small animal population of Chile. Instead of squirrels scampering across the lawns, we now watch birds that prefer to walk than fly stroll across.

While the breaking of a bowl hardly seems like a notable event, my reaction to seeing it lay in pieces on the floor was. Instead of feeling anger, dismay, regret, I just looked at it, and without emotion, bent to pick it up. It was in that moment that I realized that my life was no longer dictated by the things that I did or didn’t have; indeed I was no longer a measure of my things, and my things were not a measure of me.

Prior to my life as an expat and our experiences of the quake, my life had been measured by the acquisition of things. Success among my peers was measured by the cars we drove, the clothes we wore, the communities where we lived, the quality of furnishings that we had, and the latest electronic gadgets we trudged around with. Too much was never enough in the jockeying for social position.

At the time, it seemed that I was bucking the system by choosing to live in a community not bestowed with distinction, and driving a car until it ceased to run. However, as my house still overflowed with multiples of goods, I was still caught up in the status game. Worse, I was stuck with the responsibility of taking care of all of those things. Just in that aspect alone, life seemed suffocating.

Fortunately, major life changes came to the rescue. A divorce divested about 95% of the goods, a trans-Earth move with my new mate took care of half of the 5%, and the 2010 quake eradicated even more. Even so, it still seems like we have more than actually needed.

I notice this most of all when visiting with other families in Chile. Poverty is still quite pervasive, and even those who represent the middle class live with far less than their U.S. counterparts. With only a small percentage of the population actually living a truly comfortable life, there isn’t the pressure to have the latest, greatest, or finest. Most people just settle for something that will do.

Conversations don’t spin around who has purchased what, traveled where or invested in such and such. People tend to spend more time talking about relationships, times spent together, shared interests and perhaps projects being pursued. There also tends to be a lot more telling of jokes and laughter. Time spent together is more interactive than competitive.

So, it was a real shock to be exposed to conversations upon a return visit to the States, after having been away since before the earthquake. I never realized just how much time had been devoted to talking about what we had or were going to have. In listening to passing discussions as we traveled through airports to our destination, I became acutely aware of how crass and bragging such interactions can come across to outsiders.

It isn’t that status symbols don’t have sway in Chile, for they do, and anyone traveling to Santiago and other popular tourist spots would do well to be well-dressed, it’s that most people don’t brag endlessly about their things. Those who can afford goods here are still subject to flaunting, as in other parts of the world, but there seems to be less energy expended talking about them. Also, status symbols are more likely to be attired by someone than used to attire the house. However, the further away one gets from Santiago, Viña del Mar, and other prime destinations, the symbols become less frequent.

As a resident of a city where so much was lost during the quake, the emphasis on the importance of owning things has diminished. It just isn’t worth the energy expended to pursue, when all can be lost in less than three minutes. I’d much rather devote my time and energy to experiences and memories that can be treasured for a lifetime, and don’t have to be dusted on a weekly basis.

While I’ll always appreciate fine quality, and have preference for such, I wouldn’t trade them for the kisses of my repentant Missy, who suffered grievously and unnecessarily, worrying that her new Mommy would dispense a harsh punishment. One look at her furrowed eyebrows, hung head, and trembling body was not worth one penny spent on the bowl. Missy was more precious than any plate could ever be.

Photo: Missy at 3 months of age