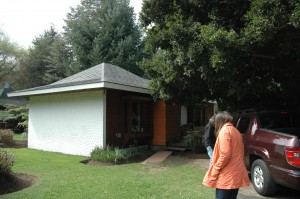 Looks can be deceiving. From the outside, the cabaña that was to be our family home for the week of Chile’s Independence celebrations appeared relatively nice. Although it didn’t exude the charms of its sister cabañas, it was the last available unit in a resort that was an easy walking distance to downtown Pucon. The mega supermarket, Eltit was also just a short distance away. It should have been the ideal situation for a mult-generational family getaway. Then, we walked in.

Green Acres, for those who still remember the 1960s sitcom of a NYC couple that goes country, had nothing over this temporary residence. Unfortunately, the problems were not readily apparent to a host of unsuspecting weary travelers arriving in the waxing hours of twilight.

At first, it seemed that it would be just the sunken living room and raised dining area without rail that would present a challenge to my 83-year old mother-in-law and our flock of ever-so- potentially -inebriated adults reveling in evening hour festivities. As long as my mother-in-law had her constant buddy, her cane, and a wall to hold onto, she felt reasonably secure. As for the rest, the 4-5 inches were not so great a fall.

The cabaña featured three bedrooms, one en-suite, one with two sets of bunk beds, and one with two single beds and a door that could only open part way due to the end of one bed. My brother- and sister-in-law claimed the en suite, our niece and nephew the bunkroom, and my mate and I chose the badly arranged room. Having once been a professional interior designer during a four-year break from advertising, and blessed with an eye that can visualize to the pica, it didn’t take long to rearrange the furniture for easy entry. By time the beds and nightstand were repositioned, my mother-in-law was already getting settled into a lower bunk. It was just as well for a subsequent two days of rain explained the positioning of the beds.

Initially, it was the hall bathroom that presented problems. Only the hot water handle functioned in the sink, and water dripped constantly. There was also a noticeable puddle of water under the water line to the toilet. Eventually, both would turn into Niagara Falls. This helped to overlook the badly damaged toilet seat, and the inappropriate choice of brown for both fixtures. The color of such fixtures should never reflect the object of their use. We jokingly referred to this room as “baño de servicio,” or “baño de Nana,” as usually the facilities appointed for service or nannies are the tightest, least efficient, least appealing, and least well-maintained rooms in the house. Although the shower did sport a multi-jet spray system, it was impossible to get enough hot water for a reasonable shower. Apparently, the sink and toilet had first dibs to that.

So, we took to using the en suite bathroom, which also had a door to the hall. This room too had its quirks. As with the “nanny’s bathroom,” this one only featured the same color choice, hot water at the sink, and the toilet seat was cracked and gouged by the lid. However, it did have a self-contained multi-jet shower with radio for early morning vocals. Unfortunately, the base of the shower drained slowly, through osmosis it seemed. Also, it was the ceiling, but not the fixtures, that dripped steadily with the rain.

The television in the living room, although a relatively new flat screen, had good reception on only one channel. The remaining channels reminded me of badly turned rabbit ears (antenna) from my childhood. Fortunately, the sound worked just fine. For the most part, we relied on ipads for music, conversations for entertainment, and the warmth and crackling sounds from the wood-burning stove. The cushy red leather sectional provided sufficient seating and comfort. This area was the best feature of the cabaña.

Although the kitchen/dining area was tight, we managed to have three cooks working at a time, in a prep space of 1.5 by 4 feet, and to seat eight around the table. No one back home would have believed that so many cooks, in such a closet-sized work area, could cook so well together, but we did it. I usually joke that the super tiny Chilean kitchens are the Chilean men’s way of getting back at the Chilean women. After five years here, I’ve learned the pivot without hitting anything or anyone movement. Cooking is quite a ballet here!

The coup de gras of the kitchen were without question the cooktop and oven. The oven worked as quickly and efficiently as a Betty Crocker toy oven. For those who are not familiar with that 1960s marvel of a toy, one pushed a cake mix through one end, let a light bulb bake the mix for an insufferable amount of time into an inedible mass of dough, and then pushed it through the other end. Although the oven was a decent brand mark, it was definitely not working properly, and a salmon that should have taken only 15-20 minutes, top, took more than an hour to bake, and was still raw in the thickest part.

The cooktop had its own surprises. Two of the burners occasionally expelled gas at an accelerating rate. It was quite a shock to be standing at the cooktop, and suddenly hear the gas blasting through the burner, and to feel its movement. I was thankful to not incinerate my clothing while stir-frying in the wok.

In spite of all the trials and tribulations of the cabaña and the sacrifice of limited pots and pans to the continuous drips of rain through the ceiling for two days, we had a good time. We learned to look aside from the obvious inconveniences, and to focus on just being together as a family, to relish the beauty of Pucon, to appreciate the setting and attractions at the cabaña resort, and to count our blessings for the more comfortable lives that we led back home. However, in the future, we will definitely give pause to reserving the last available unit at any resort.