There is a tree that grows in Chile, which emits the most offensive olfactory, gut-wretchedly putrid aroma that it assaults even the hardiest of breathing pedestrians. After five years of seasonal contact, I have finally committed to the quest of discovering the what, why, and how of its existence. Commonly called the Maidenhair Tree, officially known as Ginkgo biloba, and personally known as the “Stinky Tree,” the Ginkgo biloba is a dioecious, deciduous living fossil, native to only China but transplanted worldwide, with a history that goes back almost 300 million years. According to the International Organisation of Palaeobotany, the tree is the only surviving representative of a once prehistoric flourishing group of Ginkgoales.

Perhaps the most interesting characteristic of the Ginkgo biloba, besides the distinction of being a living fossil, is that there are separate sexes, with the male tree producing motile sperm and the female producing ovules that require fertilization. The sperm are released through pollen tubes, made airborne, and then left on their own to seek the eggs of the female. Once fertilized, the end result is a seed with fleshy hull that produces an aroma often described as putrid, rancid vomit. Apparently this wretched smell is to protect the embryo from would-be consumers, once the fruit is released from the mother tree.

As a living fossil, and hence a protected tree in Chile, we are treated to this most unpleasant exposure every autumn, when leaves and fruit begin to blanket the sidewalks of the University of Concepcion. Unfortunately, not even the occasional late fall rains can wash away the obnoxious aroma. It requires an entire onslaught of torrential winter rains to remove all traces.

In spite of this monumental drawback, the Ginkgo biloba is a beloved tree among gardeners. It is beautiful, majestic and hardy (thanks to its enormous stink, it also repels insects and hence the spread of disease). The fan-shaped leaves turn a golden yellow during the fall, are a visual and unique delight among deciduous tree leaves. However, like Limberger cheese, one just has the get passed the nose to appreciate its wonder. 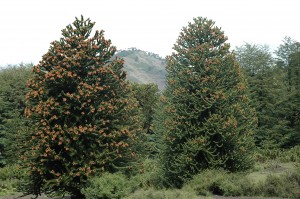 In addition to this Chinese expat tree, Chile is home to its own living fossil tree, the araucaria araucana. The araucaria, also known in South America as the Pehuén, is a native pine tree with flat, triangular-shaped needles that cover both the trunk and branches. It also bears the English name, the “Monkey Puzzle Tree,” taken from the British horticultural legend that one gardener once said, “it would puzzle a monkey to climb.”

When very young, the araucaria looks like a very spikey German feather Christmas tree. Branches are sparse and widespread. As the tree grows, it takes on a more bulbous appearance, and looks very full (pictured above). The mature araucana loses its lower branches, leaving only a thick growth of branches at the top. 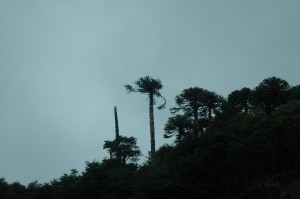 During a five-day horseback trek in the Andes a couple of summers ago, I learned that the Pehuénche, an indigenous population in the Araucana region, take their name from the tree. “Pehuén” stands for araucaria and “che” for people. They re the “People of the Araucaria,” and the tree is very sacred to their culture. The nut of the tree, the piñon, is a staple of their diet, and has also become a favorite snack in the general Chilean populous.

The araucaria is one of my personally favorite trees in Chile. It has true personality and visual appeal. It is also so unlike any other that I had previously been exposed to that it was love at first sight.

As with the Ginkgo biloba, the araucaria hearkens back to the Mesozoic age. However, unlike the pungent Ginkgo biloba seeds, the piñones are believed to have been a food source for Sauropods. Remains of sauropods, which thrived during the Late Cretaceous period, have been found in regions from the Atacama down to Patagonia. Other species of dinosaurs that once populated Chile during the Upper Jurassic and Late Cretaceous periods include: theropods, ornithopods and neogaeomis wetzeli. Jurassic marine reptiles were also abundant and included:  pleurodiran and cryptodiran turtles, ichthyosaurs, pliosaurs and crocodilians.

In 2008, the Associación Paleontológica de Chile (Paleontology Association of Chile) was founded to promote paleontologic studies, and to protect paleotologic sites. During a widening of Route 5 in the Atacama Desert, in 2011, a 2-7 million-year old graveyard was discovered. Covering the size of two American football fields, the area proved to be a trove of skeletons, including that of a dolphin that had walrus-like tusks. The site has since been declared nationally protected. 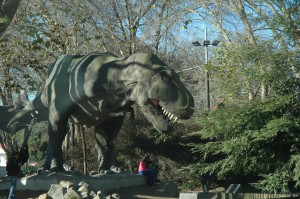 One of my favorite parks in Concepcion is the Jurassic Park in Plaza Acevedo, designed for children, young and old. Numerous life-sized, tactile dinosaurs hold reign of visitors’ imaginations and provide distractions to drivers passing by. The park features a number of activities relating to the dinosaurs, as well as the Museo de Historia Natural de Concepción (Natural History Museum of Concepcion). It is a great destination for an afternoon of family fun. 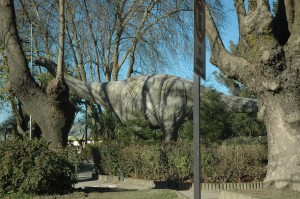