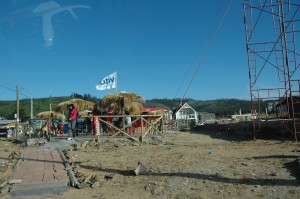 Years ago, a family physician told me that I hid personal problems behind my humor. In Chile, I find that people fight personal problems with humor. This indomitable spirit is most currently apparent in Dichato. Residents have taken what little was left after the tsunami swept much of the community away, and are in the process of rebuilding themselves into a new version of a tourist destination. While life will never be the same as before, the cataclysm of February 27, 2010 did not destroy the soul of the community.

For most of the past year, it was very troubling and heartbreaking to drive through Dichato on the 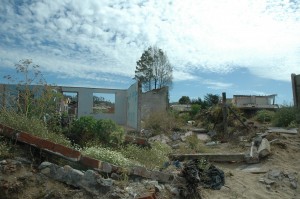 way to Pingeral to visit with friends. My own soul felt the weight of life’s burden there. Without the means to be of any service to ease their suffering, I found myself wanting to turn away. It hurt too much to contemplate their plight.

When family cousin, Maka, was visiting from Viña, and wanted to see the damage in Dichato first hand, I squelched my reluctance, and helped to plan a day’s excursion.

The day was bright and sunny as we left Concepcion to head north along the coast. The itinerary was Pingeral, Dichato and if time permitted, Coliumo.

The drive to Pingeral required an excursion through Dichato, and we were surprised to find that the bridge that connected Dichato’s central business district (really one main road) to the road leading to Pingeral had been rebuilt. One was no longer required to wind through a snake-like route through the town.

Pingeral has long been a weekend/any-time-of-the-year getaway for many of Concepcion’s wealthier families. So, it was not too surprising to find that many of the houses have been rebuilt, and that this private community was looking almost back to normal. There were even signs advertising the opening of a recently constructed clubhouse. The one very notable difference was the absence of people. Pingeral gave more the impression of being a ghost town than a thriving resort.

While it has always been a tranquil and sheltered community, the silence was eerie. Even the white, sandy beach was virtually vacant. Many houses were discreetly available for sale, and families who live there year-round have elected to move elsewhere, or to even return to their home country. After a brief drive through deserted streets, we decided to head back to Dichato. 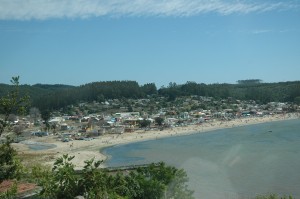 As the car came around the bend that declines down to Dichato, we paused to contemplate the changes to the coastline and the town. In the foreground, entire streets of houses were gone, the course of the creek had changed, and there was far more sand. The town itself looks more like a recently established community, with vacant lots interspersed between buildings, than one that has existed for a few centuries. One sight that was good to see were all the people who had returned to the beach.

The main business street is also coming back to life. The few brick and cement buildings that were 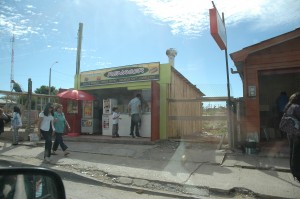 left standing have been or are in the process of being renovated. One notable difference to the streetscape is the number of one storey, wooden lean-to type buildings being constructed. Simple and economic to build, these structures are also more forgiving to the undulations of the Earth.

It was emotionally uplifting to see how Dichato is coming back to life. Tourists are once again strolling along the thoroughfare that runs along the beach’s edge. Vendors have also returned the sidewalks to hawk their wares. There is a renewed vibrancy, and it seems as if the year of 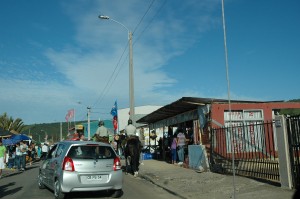 mourning is finally over.

One of my favorite sites of the day was to see how one business owner employed a sense of humor by converting the remains of a house foundation into an open-air restaurant. There were no walls to obliterate the view, and no walls that could be washed away.

Other owners have chosen to relocate their establishments. The Don Eduardo Restaurant has reopened in a converted ranch house, and now has a beautiful view of the harbor. Located at Malaquias Concha 180, just past the tsunami-gutted hotel, the restaurant offers modestly priced, 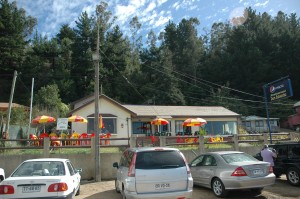 traditional Chilean seafoods, with a choice of closed or open-air dining.

We stopped to partake in a wonderful meal of mariscos empanadas, merluza frita, ensaladas and wine. It was thoroughly wonderful to relax, gaze at the waves rolling in, and to enjoy the resurging life in Dichato.

Sated from our meal, we then pushed on to Coliumo. While on the way, Maka revealed that she had spent part of her youth there, and was wondering if their house still remained. 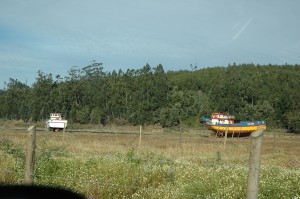 Coliumo, although low on the media radar in the days following the quake and tsunami, had also been heavily damaged, with great loss of life and property. The wall of tsunami water had pushed five massive fishing boats several kilometers inland. Shocking to see standing in the middle of a field, the last two boats are being slowly moved back to the harbor.

In comparison to Dichato and Pingeral, the reconstruction of this small fishing community is moving slowly. Fishing boats have returned to their toil, and once again, predominate the harbor 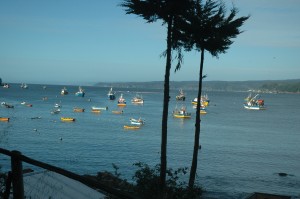 in late afternoon. However, the homes of many of the hardworking fishermen have yet to be restored.

Maka’s former family home was one of many that were washed to sea. After a brief walk along the one main road, she was able to find some familiar faces, and listen to their heart-wrenching stories. So much tragedy had befallen this tiny, close-knit community. 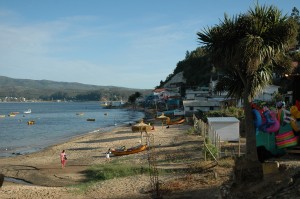 Our drive back to Concepcion was very quiet, with each of us lost in pensive thoughts of the day.