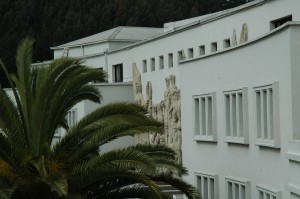 Yesterday, while preparing to post my story about the trip to Dichato, a violent earthquake rocked the university building. The bookcases began to sway, spilling surface contents to the floor. I screamed, paused for the major shaking to stop, and then ran into the corridor with my cell phone in hand.

I was alone in that part of the wing, as the university is in summer recess, and was so relieved to see post-doc student, Marcelo standing at the other end of the hall. He had been working in the lab at the moment of the quake. We both gave a relieved smile at not being alone in the quake, and then proceeded to call our respective spouses for reassurance of their safety, as well as our own.

Wave after wave of replicas (aftershocks) sent the long, curved building into uncontrolled undulations. Reluctant to attempt the stairs, I alternated between going back into our corner office and the hall. The office was moving like the tip of a dog’s wagging tail.

I could hear sirens resound outside, and wondered what damage had been wrought. When Marcelo popped his head in to say that he was leaving, I said that I’m going with you, and quickly packed up the laptops.

Exiting the building, I was relieved to see my Lover Man walking towards me. He had been at a brake repair shop when the quake hit, and had driven back to be with me.

We spent the remainder of the afternoon with family, watching reports on the quake. All businesses, including grocery stores, were advised to close, so there was little else to do.

Replicas occurred throughout the day, and are still occurring. Mother Earth keeps reminding us of her indigestion.