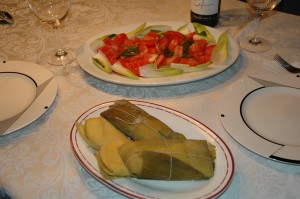 Summer is in full swing, and two of our favorite vegetables have come into season, the humble corn and the lowly bean.

Among Chileans, nothing can make the mouth salivate faster than the smell of freshly prepared humitas. Although often described as being a “Chilean tamale,” for lack of a more commonly understood comparison, the humita is any but a tamale. The only similarity is that it is made from corn and is wrapped in cornhusk.

Mexican tamales contain cornmeal or flour, which stiffens the hulled corn into the familiar masa. Also, tamales may also contain meat, usually pork. The Chilean humita, on the other hand, is made with freshly hulled corn, onions, lard, basil, salt and ground chili pepper. Its consistency is creamy and soft.

To satisfy our craving for Chilean comfort foods, we indulged in a feast of humitas, purchased from and prepared by a merchant who grows his own corn, as well as freshly picked porotos granadas, which were used in a soup.

One of my summer pleasures in Chile is to sit on the balcony, in the early morning sun, and shell the beans from their red-speckled pods. It is my “Zen 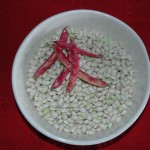 and the Art of Porotos Granadas.” While my hands are busy in the repetitive motion of snap the end, pulling the “string” and popping open the pod to extract it’s delicious little treasures, my thoughts are free to wander.

There is such a joy in cooking with Chile’s fresh produce. In moving to a new country, I’ve learned to work with the ingredients available, and to adapt many of my old, favorite recipes. I have also created many new ones, fusing the many cuisines that I’ve embraced over the years.

Although I may use many of the same produce as my Chilean family and friends, the end result is different, due to the introduction of additional ingredients and different preparation methods. One friend, Pedro, who has had a lifelong dislike of porotos con mote (a soup/stew of beans with barley wheat), once found himself enjoying a second bowl before realizing what he was eating. We laughed our way through dinner that night, and still occasionally offer him the same humble meal. 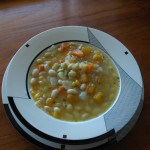 For the first picking of the season, I elected to prepare of a soup of Porotos Granados con Zapallo.

Note: Dried beans may be substituted for fresh. Soak dried beans overnight. Also, vegetable ingredients, salt and pepper may be adjusted according to taste or special dietary needs. Pork chop may also be left out, to comply with religious diets. Chicken stock may be used instead of water, and depending upon the mood, a large dose of wine may be added to the soup. The most important thing to remember about soups is that they are very forgiving and tolerant. They will take just about anything dished to them, and they can keep on giving until the last drop. More stock or water may be added to leftovers for another night’s use. Lastly, soup can always be made in advance, which allows for the flavors of all the ingredients to blend more thoroughly.