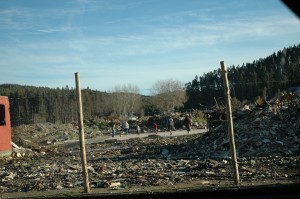 One of my favorite soliloquies, from “Man of La Mancha,” comes to mind as I think about our recent drive through Dichato on the way to Pingueral…

“Life as it is. I’ve lived for over forty years, and I’ve seen life as it is. Pain, misery, cruelty beyond belief. I’ve heard all the voices of God’s noblest creature — moans from bundles of filth in the street.  I’ve been a soldier and a slave.  I’ve seen my comrades fall in battle or die more slowly under the lash in Africa.  I’ve held them at the last moment.  These were men who saw ‘life as it is,’ but they died despairing. No glory.  No bray of last words.  Only their eyes, filled with confusion, questioning, ‘Why?’  I do not think they were asking why they were dying, but why they had ever lived.  When life itself seems lunatic, who knows where madness lies?  Perhaps to be too practical is madness.  To surrender dreams, this may be madness.  To seek treasure where there is only trash.  Too much sanity may be madness.  But maddest of all — to see life as it is, and not as it should be!”

A rather long soliloquy, but one that captures some of my thoughts about life in Dichato in 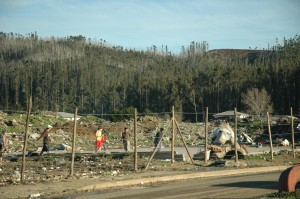 these post-tsunami days. In the midst of what had once been blocks of burning debris from destroyed buildings and their respective contents, children have unearthed a football (soccer) field. While their whole world has been swept away or pummeled into the ground, they still find the spirit of play.

While I am confident that the plight of Dichato and other Chilean communities has dropped off the foreign news radar, it’s important to not forget the challenges that many families are still facing.

Life is far from normal. Many are living in temporary wooden shelters just outside of Dichato. Provided by the government, these shelters are hardly better than most Home Depot garden sheds. They are furnished without insulation, interior walls, electricity, running water or even glass for the window openings. The goal had been to provide structures that offered more protection than the thin canvas of tents, but they offered little in the way of comfort. The addition of amenities is the responsibility of the occupants. Although these structures are intended solely for temporary use, for many, they will be home for a long time to come.

Businesses have returned to the few remaining buildings left along the main street. The community now has a 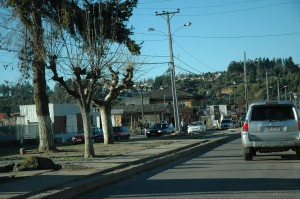 small grocery and other mercados to purchase basic essentials. In due course, I imagine that other businesses will eventually rise up.

One of the most striking things about post-tsunami Dichato are the structures that were left standing. In particular, where the heart of the community once stood, now only the freestanding bathrooms remain (small red structures in the photo below). Grass has now covered over areas where houses once stood. 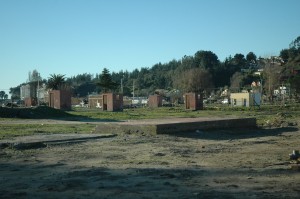 These structures have become billboards for former occupants to leave information on where they are now residing. For example, one bathroom stated that the family had relocated to Chillan. Others “advertise” to whom said structures belong. The company that constructed these structures should definitely be part of Dichato’s reconstruction.

Sadly, for many families, reconstruction will never be a consideration. The ten-meter-high tsunami that hit Dichato took a huge bite out of it’s coastline. Craters and 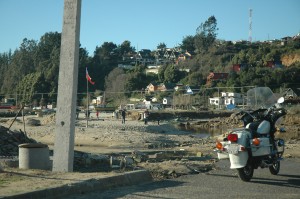 sand now stand where houses once graced. This last picture shows where we believe the house of a friend once stood. We had enjoyed a beautiful day on the beach and dinner on the deck on the weekend prior to the earthquake and tsunami. The phrase that “timing is everything,” could not be truer.