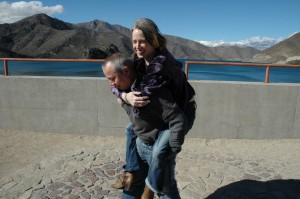 Well, it finally happened. I found myself caught between two languages. While on the phone with a customer service representative, trying desperately trying to track down a purchase ordered from the U.S., I found that I could not give my cell phone number in English, and had to call to Sergio for help. I had grown so accustomed to rattling the numbers off in Spanish that my brain could not make a quick switch to say it in English, my native language. I could see the numbers in my head, but could not make the verbal connection.

I’m sure that the rep must have been wondering what kind of looney was on the phone, or in my case on Skype. She probably even wondered whether the call was legitimate. She just didn’t know that I was suffering from Expat-Brain.

I was bound to catch that disease sooner or later. Even though I still can’t speak completely in Spanish, with certain exceptions such as at restaurants, shopping, swearing at other drivers, or buying handmade chocolate from the lady who visits the office every week, I have grown more accustomed to attempting the language, while filling in with English. Fortunately, I’m surrounded with people who also have varying commands of English.

English isn’t the only language that gets mixed in with the Spanish. As Concepcion is very much a university city, boasting numerous public and private institutions, there is a wonderful confluence of many different cultures. In addition to Chilean, one will find French, German, Italian, Indian, Chinese, Japanese, Russian, to mention a few. There have been many occasions where I was able to communicate using a mixture of English, German and Spanish, or to greet someone in Japanese. During my early days in Chile, I found that German, French and Japanese phrases, which I hadn’t spoken for almost twenty years, came to the forefront. It seemed that my early study of those languages impeded my middle-years attempt to learn yet another. Presently, the perfect language for me to speak is a hybridization of many.

While I long for the day when Spanish will fluently roll off my expat tongue, I must now ponder what will happen to my native tongue. Solo el tiempo will tell!