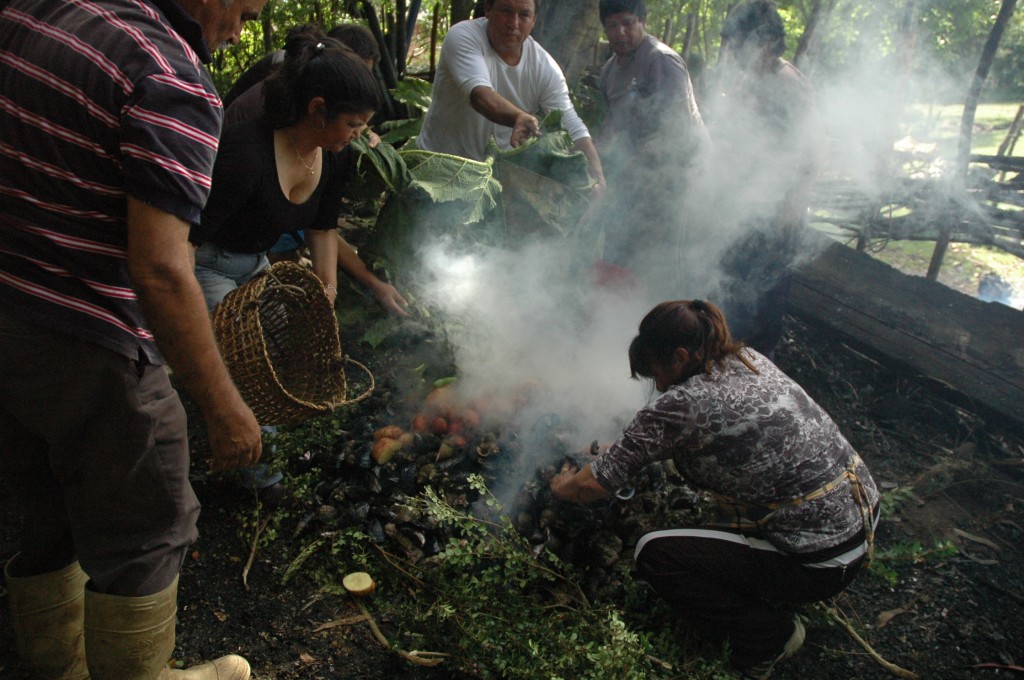 One of the joys of traveling around Chile is all of the wonderful families we have come to know. While our adventures are always fascinating and thrilling, it is all of the special friends we have been blessed with that have made each experience remarkable. Such was the case when we were invited to attend one family’s gathering for a curanto, the Chilean version of the Hawaiian kalua, which is a meal cooked in an earthen pit). 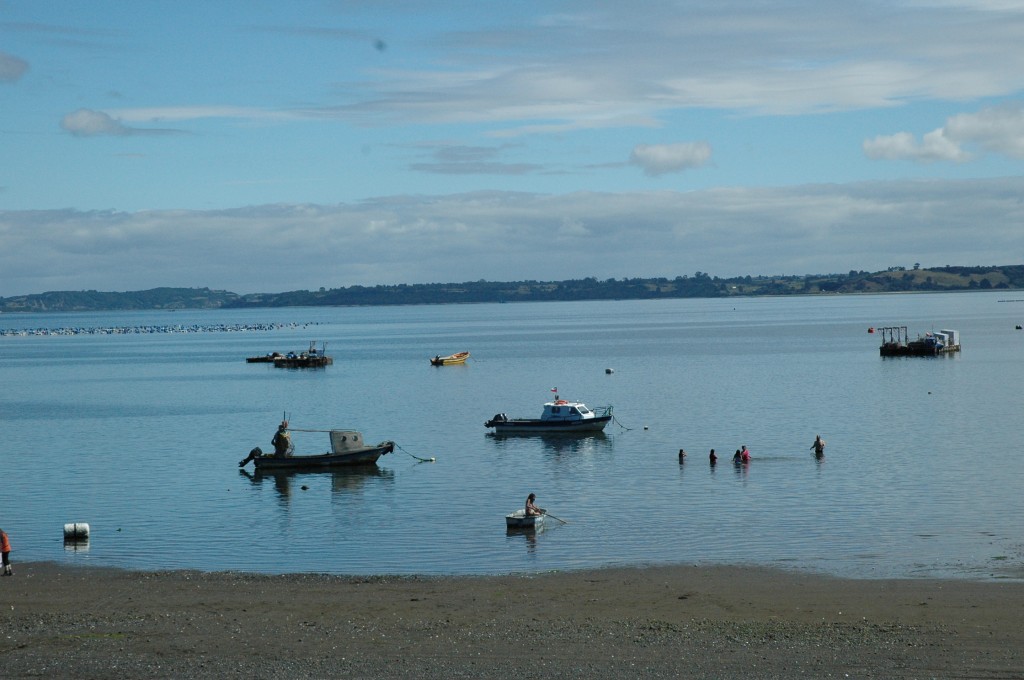 Our destination was a very small fishing community on the island of Quinchao. In the bay, anchored fishing boats bobbed up and down with the gentle waves that were rolling onto shore. The sun was shining, white clouds dotted the skies, and the sounds of lapping water created the perfect mood for a day of festivity. 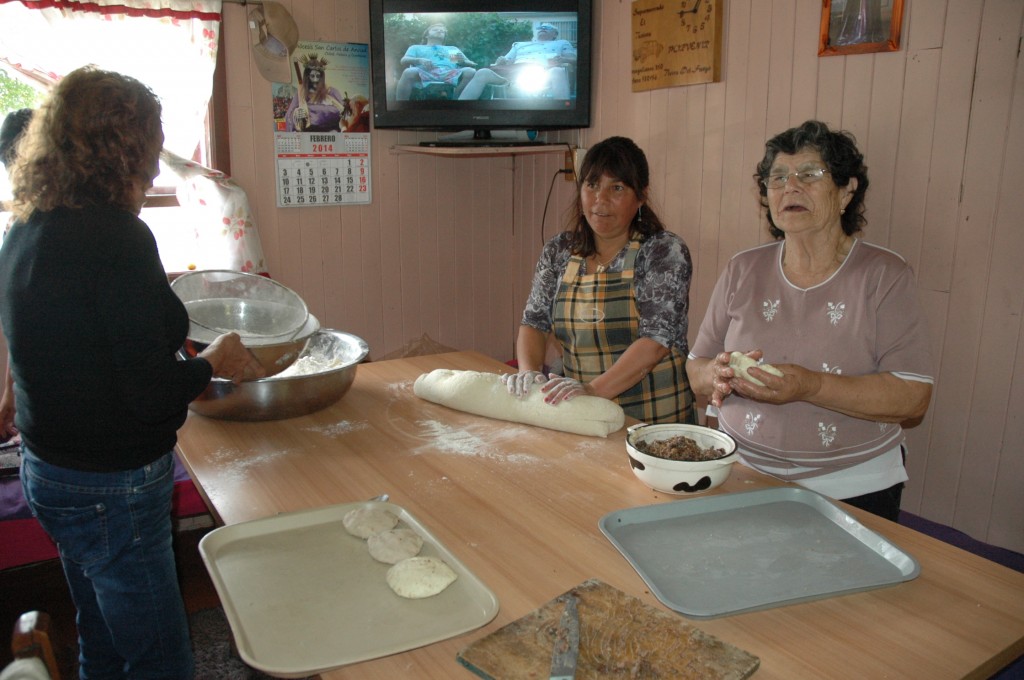 We arrived to find three generations of ladies hard at work in the kitchen, preparing the dumplings that will cook with and complete the curanto. With directions from the youthful grandma of the family, one lady mixed dough, while another rolled, and a third worked with grandma in preparing two versions of the Chiloe dumplings. One version, called milcao, was made of a mix of raw and mashed potato with lard and salt. When the dough was 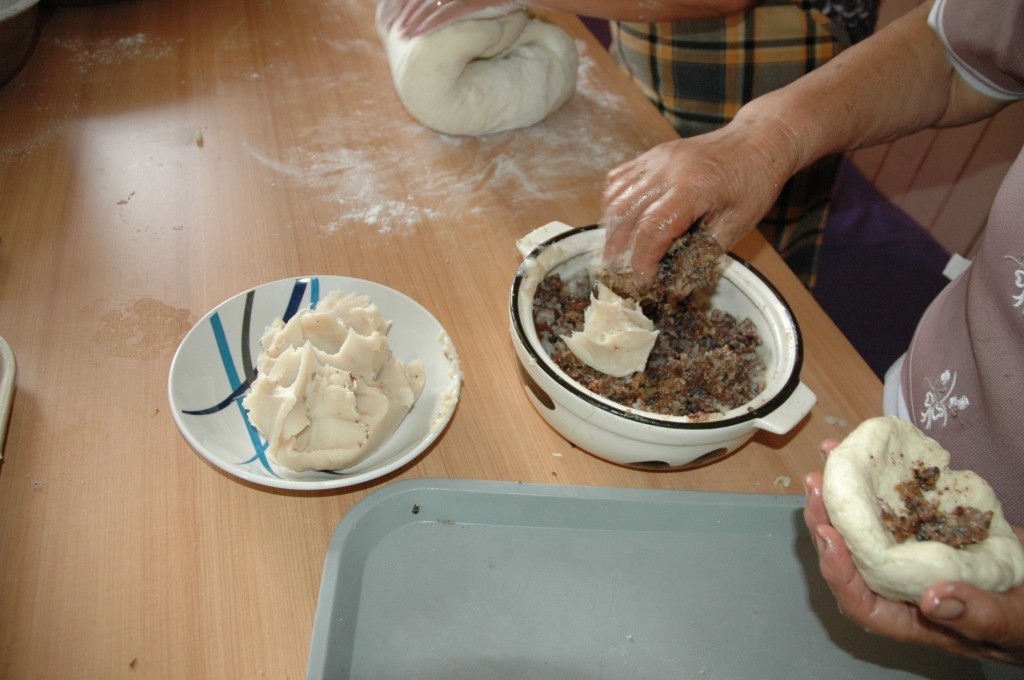 ready, a pinch was rolled into a ball and filled with fried chicharrones (deep fried pork fat). The other dumpling, called chupaleles, was also made from potato dough, but differed with the addition of wheat flour and lack of chicharrones. 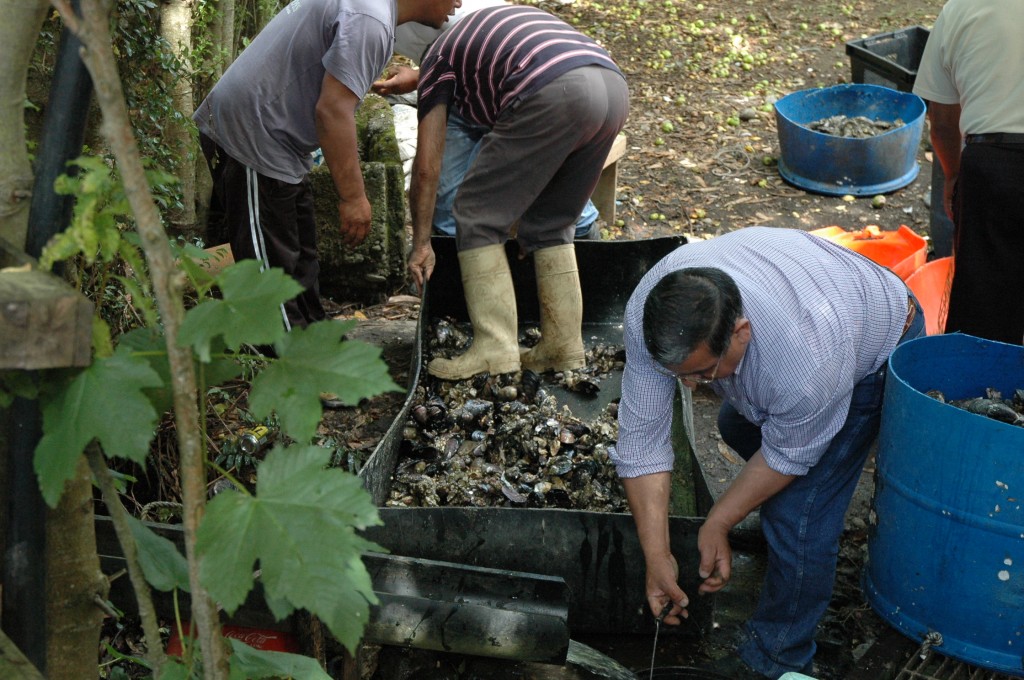 While the ladies mixed, rolled and shaped in familial rhythm, the men labored outside, cleaning the shellfish that would comprise the curanto.  Large vats contained an amazing variety of bounties from the sea. Undoubtedly just hauled in that day, there were mussels, clams, oysters, crabs, periwinkles, sea urchins, and picorocos (sea barnacles). Each would form a layer of the curanto, to which were added smoked pork, sausages, fava beans still in their pods, four types of Chiloe potatoes, as well as the dumplings. 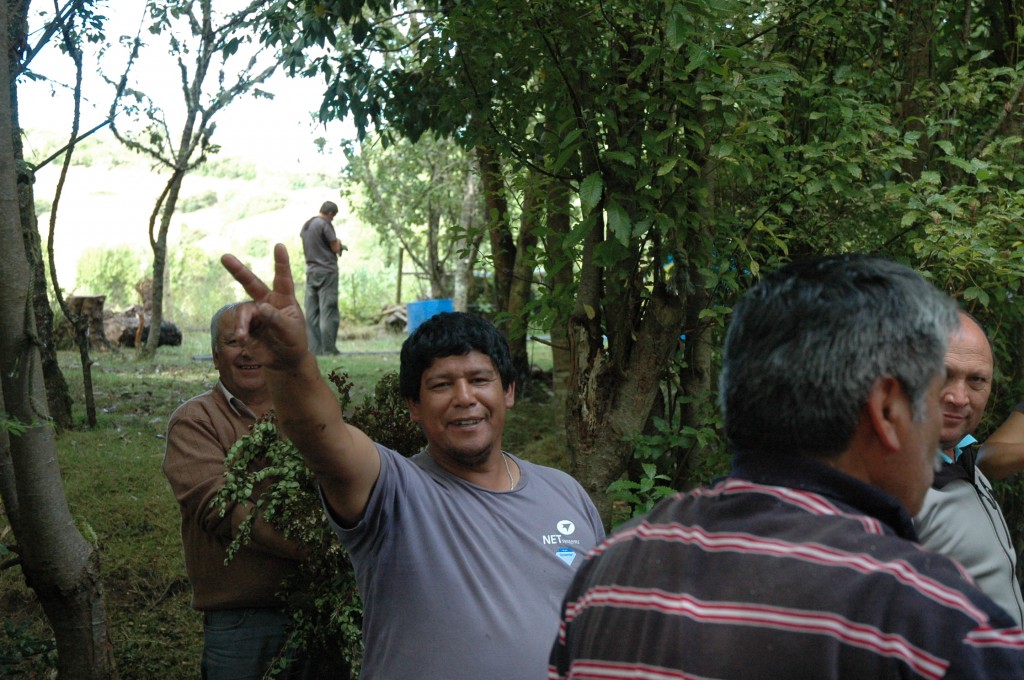 It was delightful to watch the family in action. There was little doubt that the curanto was an important part of their tradition, for each member knew and performed their specific roll like clockwork. I was impressed by the amount of labor and love that went into its preparation. It was indeed labor-intensive, but there was much laughter and play that kept everything moving along. 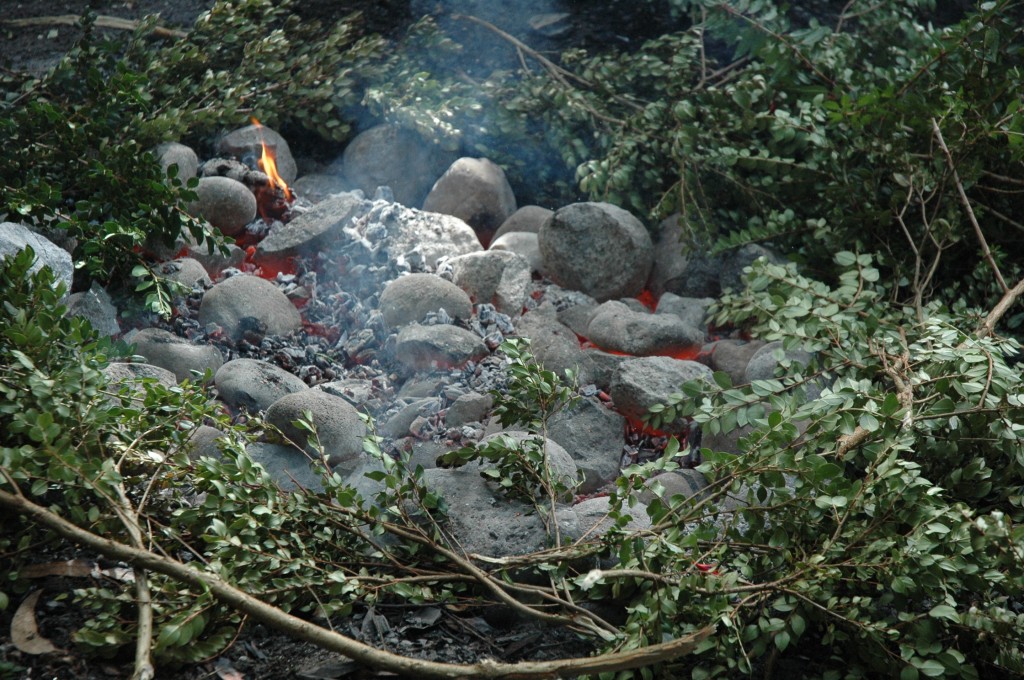 The pit and fire had been laid long before our arrival. The wood had transformed into coals that would last for the duration of the cooking process. Large tumbled granite rocks that were mounded on top would maintain the heat. Just before the layering of fare, branches from arrayan trees were placed around the perimeter of the pit. 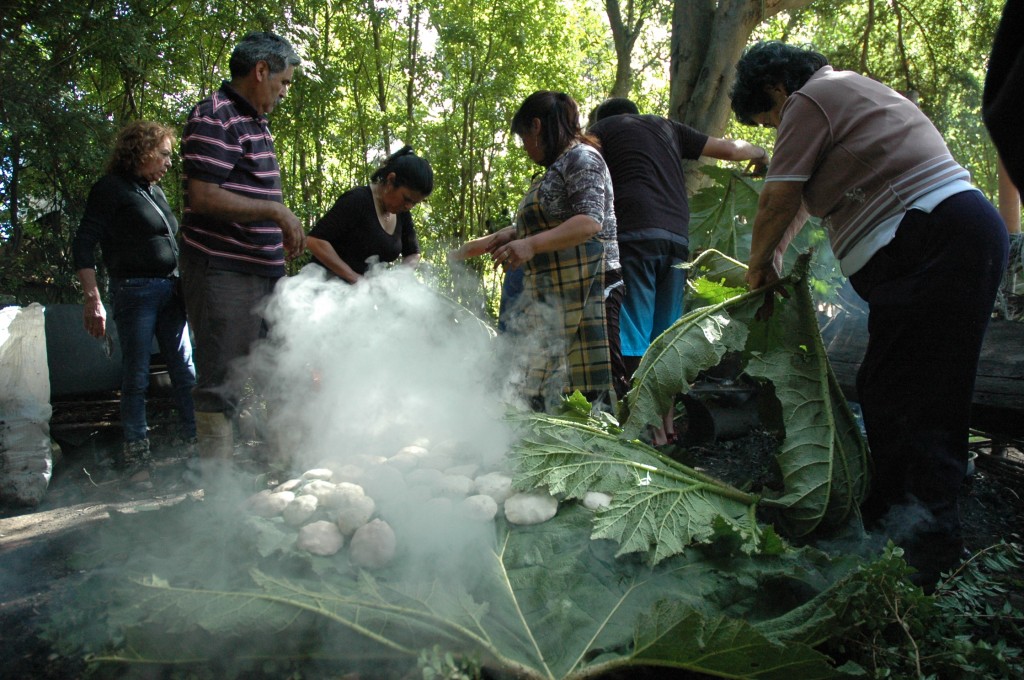 Picorocos formed the first layer, and then the other shellfish followed. To this were added the smoked meats, sausages, potatoes and fava beans. While white steam from their juices began to rise, large nalca leaves were placed on top to capture its liquid essence. The dumplings were carefully placed upon the leaves and then covered with another layer of leaves. Lastly, huge tarps were placed over the curanto to seal in the heat. Large wood logs were used to keep the tarps in place. 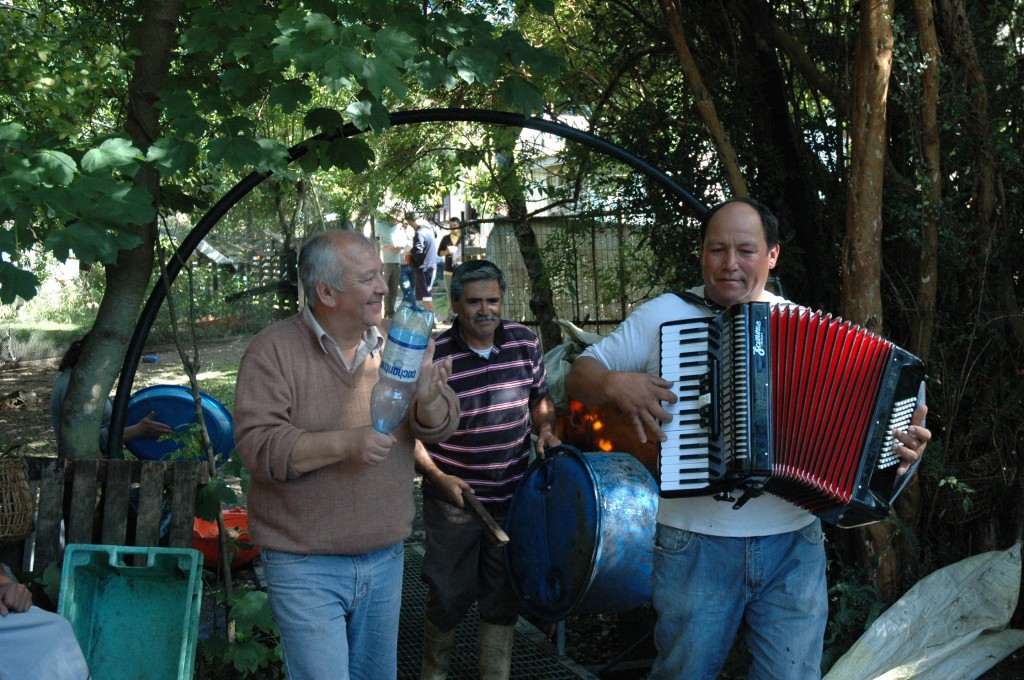 With the labors of the curanto laid to rest, the festivities of the day were ready to begin. An impromptu merry trio proceeded through the gate, playing an accordian, a bottle and half of a metal barrel drum. Everyone began to clap to the rhythm, and the matron of the family was honored with the first dance. Soon others followed suit, with the rhythms shifting from waltz to Chilean cumbia.

While the curanto awaited the grandma’s determination 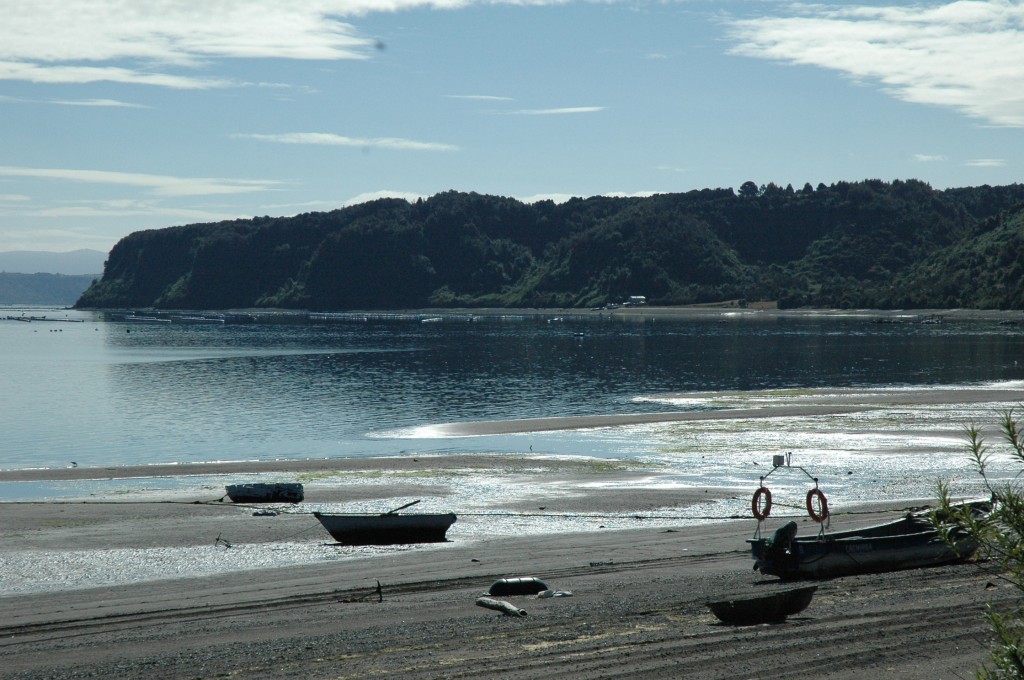 of doneness, we eventually wandered out to the shore. The waters were too enticing for my Celtic soul to resist, and the crunch of sand felt good under our feet. Some decommissioned fishing boats, with their bows pointing toward the sea, had found their final resting place. My mate entertained visions of placing one at the bottom of our own coastal hillside site, and enjoyed inspecting the remains. 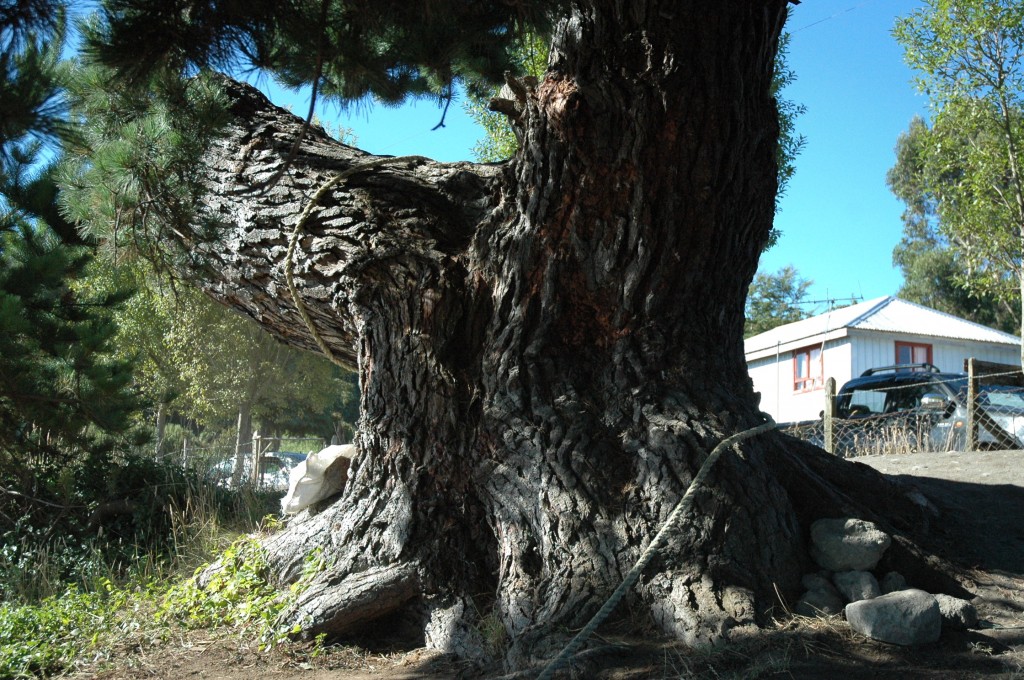 Along the street side was a massive pine tree from which a rope swing was suspended. The girth of the tree was incredible, and would have taken several of our party to encircle with united hands. The branch that held the swing was as big as a mature tree itself. Ever releasing the child within, we took turns giving the knotted rope a swing.

Eventually, one of the men from the family joined us in our revelries. While I had initially taken him for a local fisherman because of his attire, I learned that he was instead a university professor in Santiago. He, as well as others in the gathering, was visiting his family for their traditional curanto. That was an important lesson and reminder to me to never judge a book by its cover, especially in Chile.

With the innate knowledge that grandmothers everywhere in the world seem to possess, grandma decided that the curanto had reached its peak readiness. Thus began the third part of the curanto process, removing each layer in reverse order. This wasn’t like a Louisiana boil that is dumped en masse onto a newspaper covered table, but rather was a painstaking process of separating each layer according to its food type. Once complete, the feasting and drinking began, much to the delight of all in attendance. 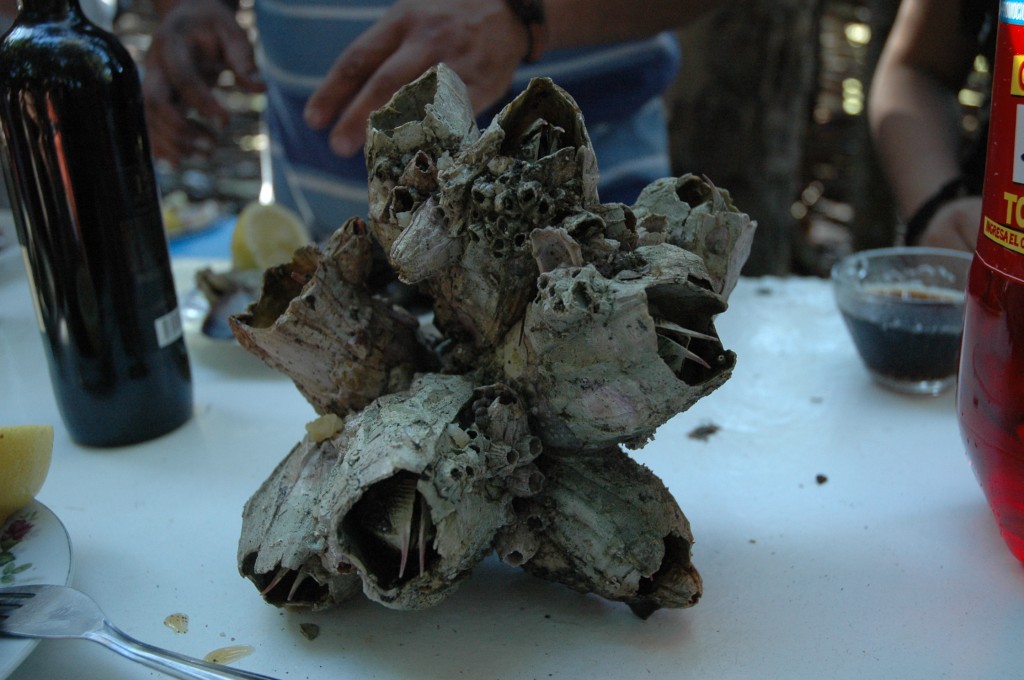 We dined al fresco at long rustic tables. As a newbie to the curanto and some of the foods employed, I was bestowed with large mass of picorocos. Although a confirmed foodie, I must admit to feeling a slight hesitation to try. Snails had proven to be a disappointment to my palate years prior, and this creature, with beak-like mouths peaking out, freaked me a little. However, not wanting to disappoint, I reached my fingers in, pulled one out, and popped some of its flesh into my mouth. There was always the glass of Chilean red wine to wash any bad experience away. Much to my surprise, it had the sweet taste of king crab, although the texture was much softer. Sold! 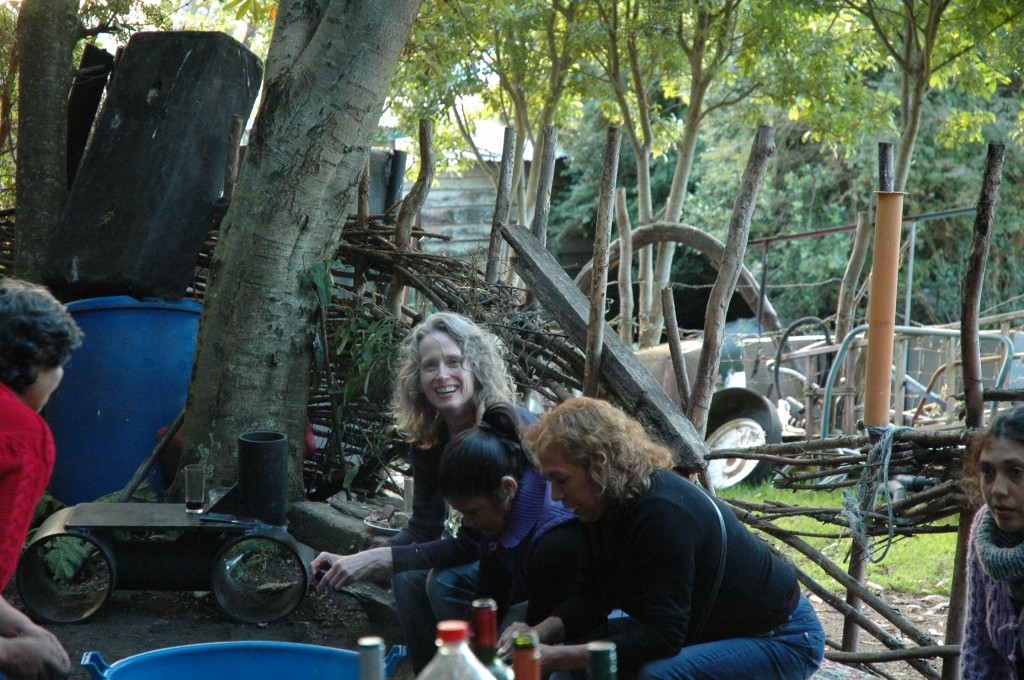 After much feasting and imbibing, came the final process of the curanto. Several of the ladies gathered around the pit to remove and separate the remains of the food. In most parts of Chile, food is not wasted, and this occasion was no exception. With a knife in hand, I joined the group in this final ritual, and found myself learning more about the humor and lives of women in the Chiloe islands. As special part of our trip to the “islands,” the memories of this day and of this family will last for my lifetime. 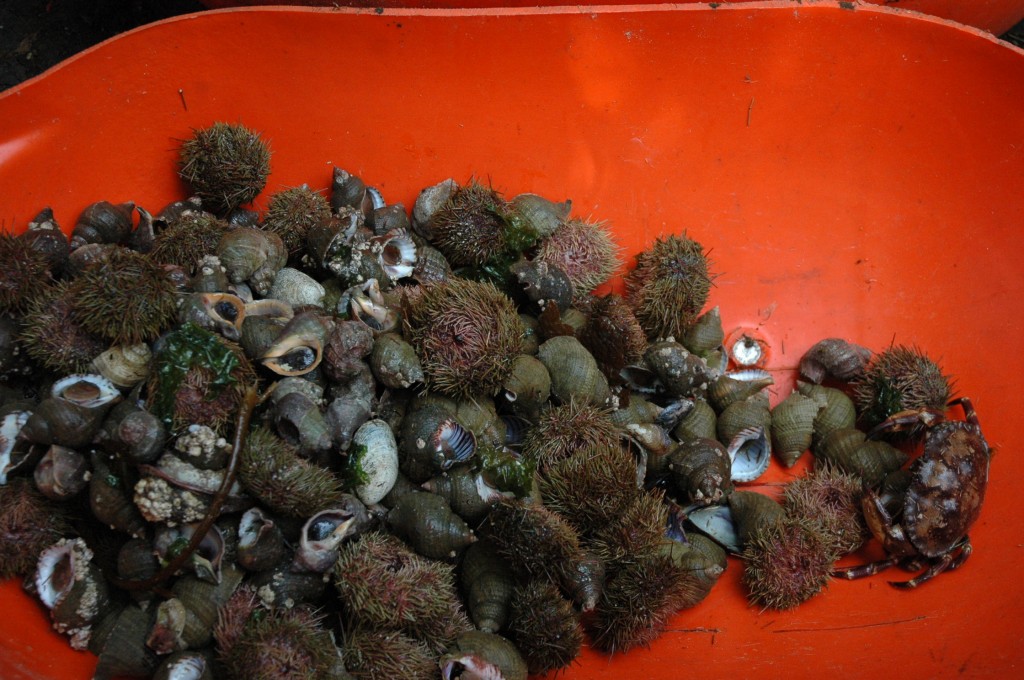 Urchins and mullosks, oh my! 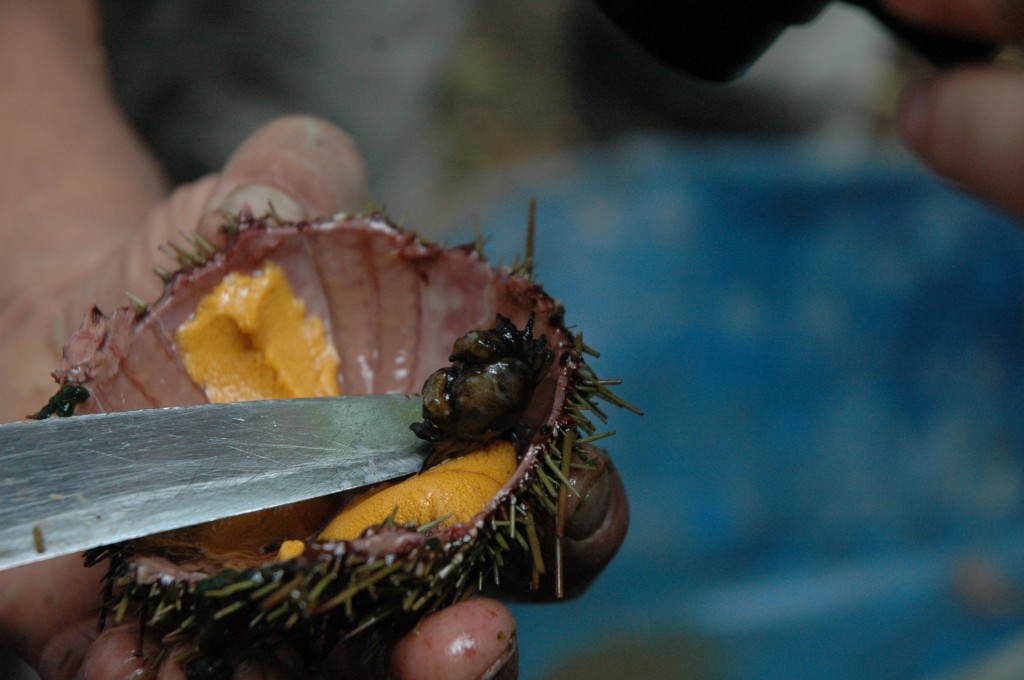 Hitchin’ a ride in an urchin 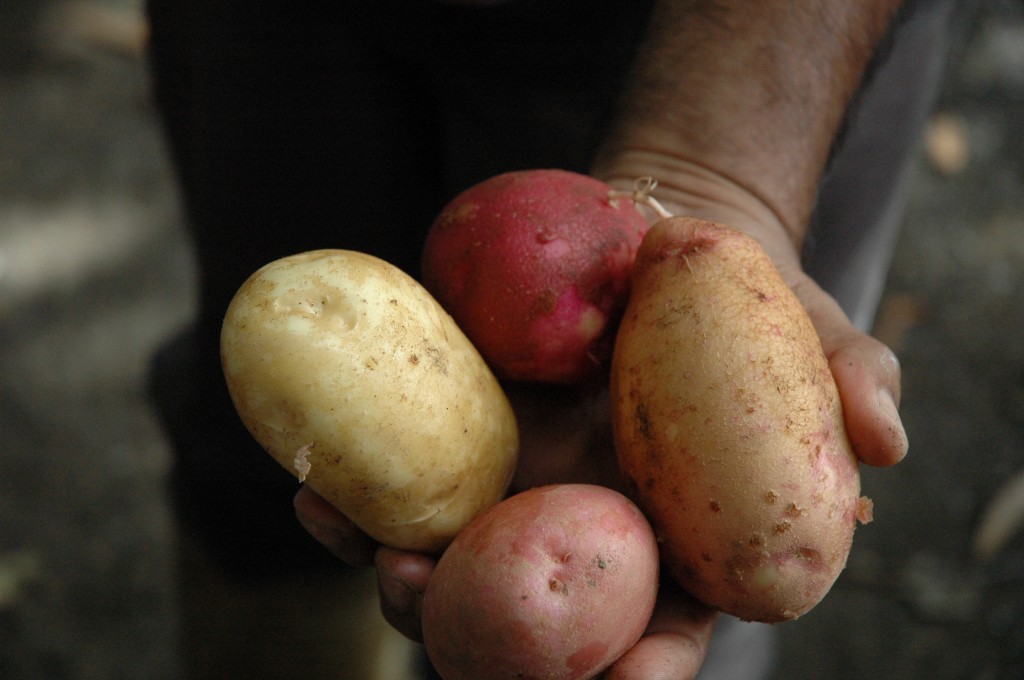 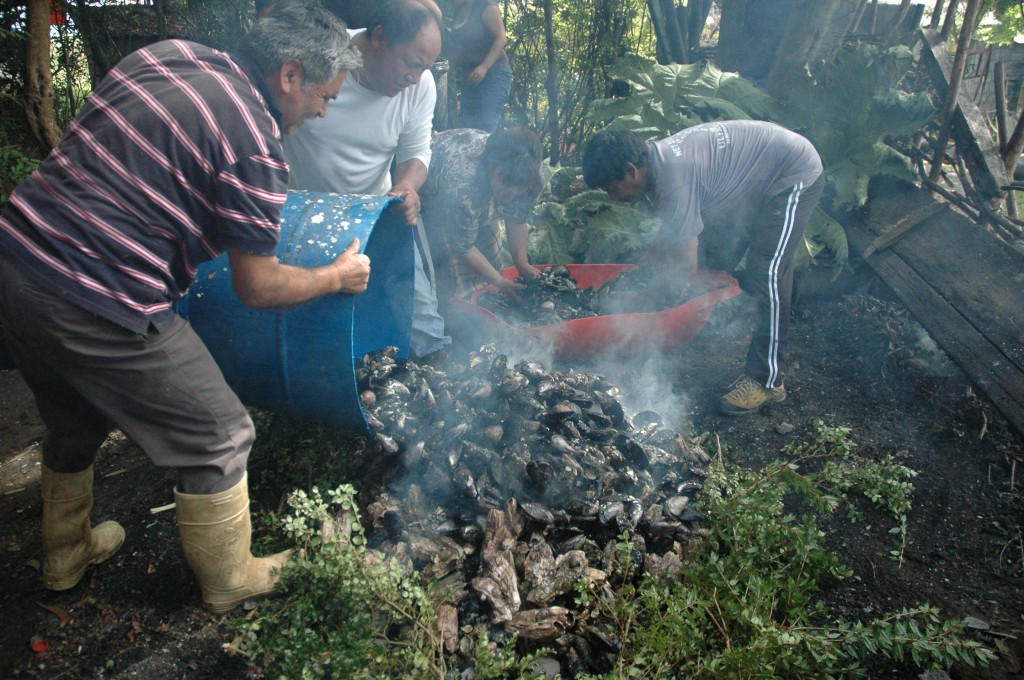 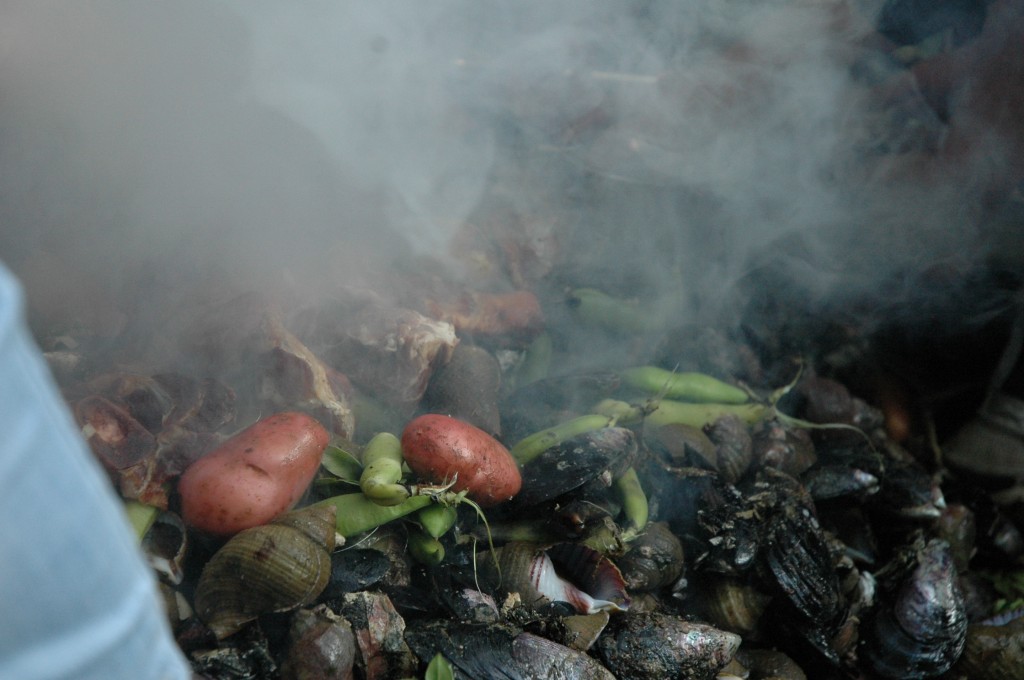 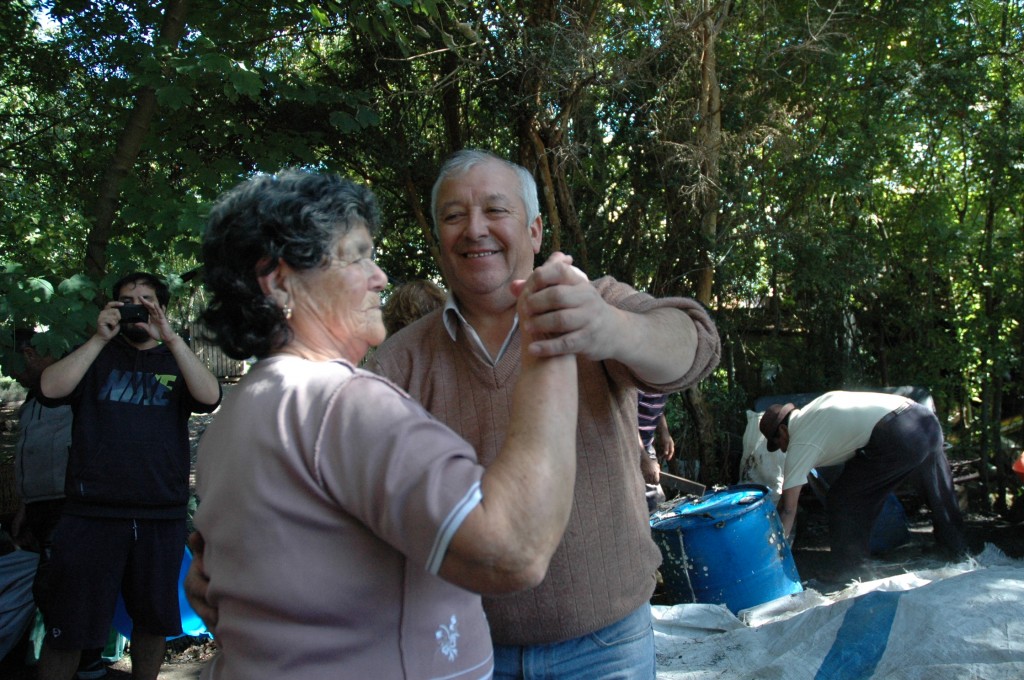 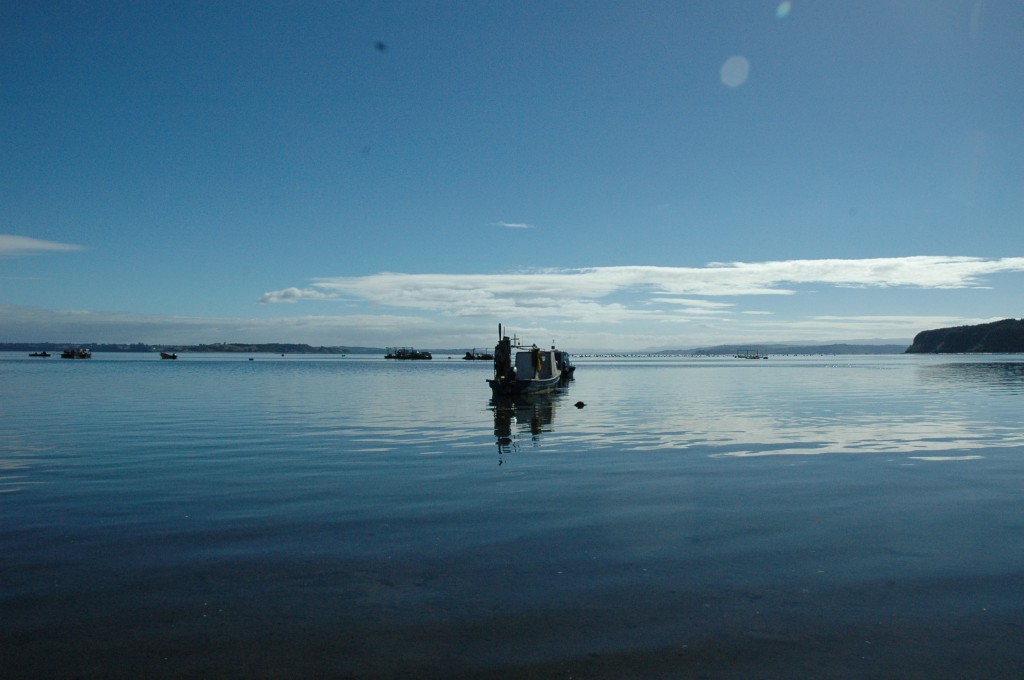 Makes one dream of being a fisherman 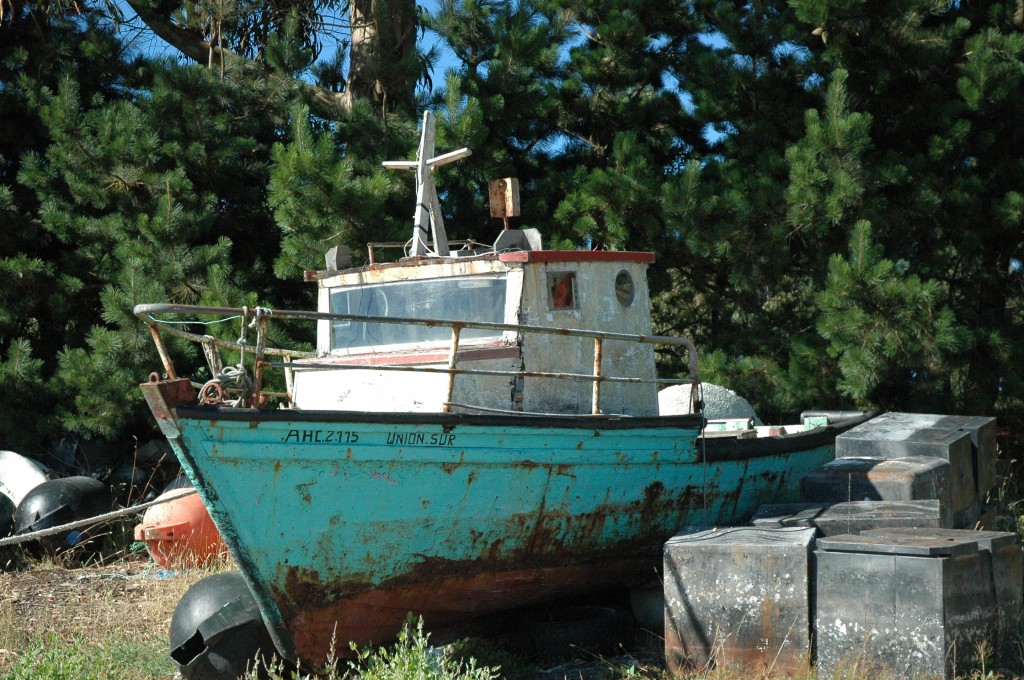 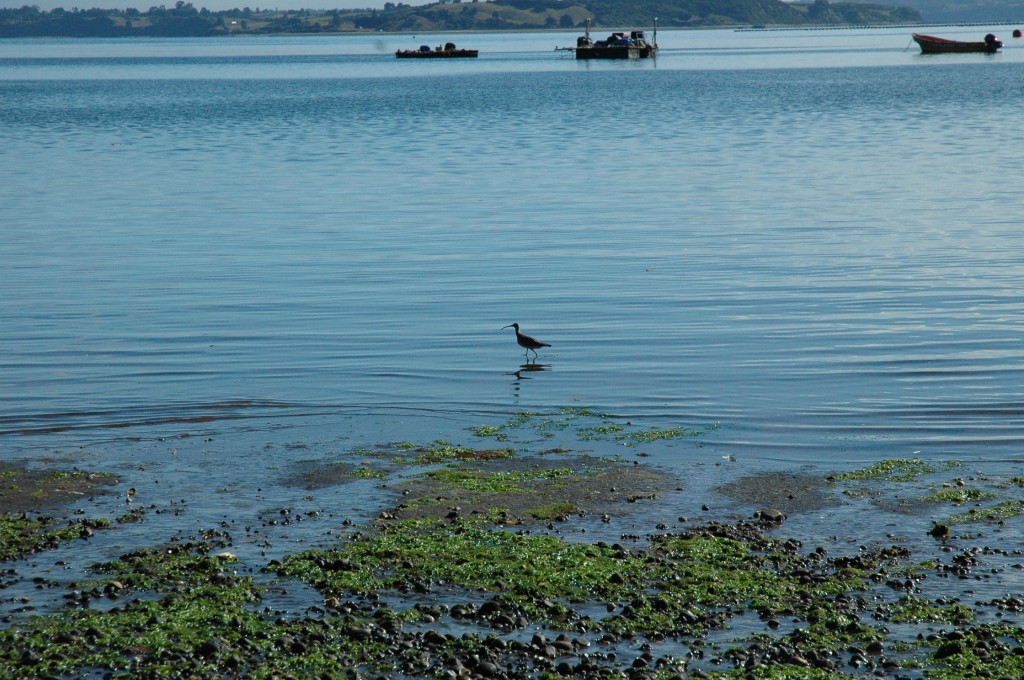 Out for a stroll 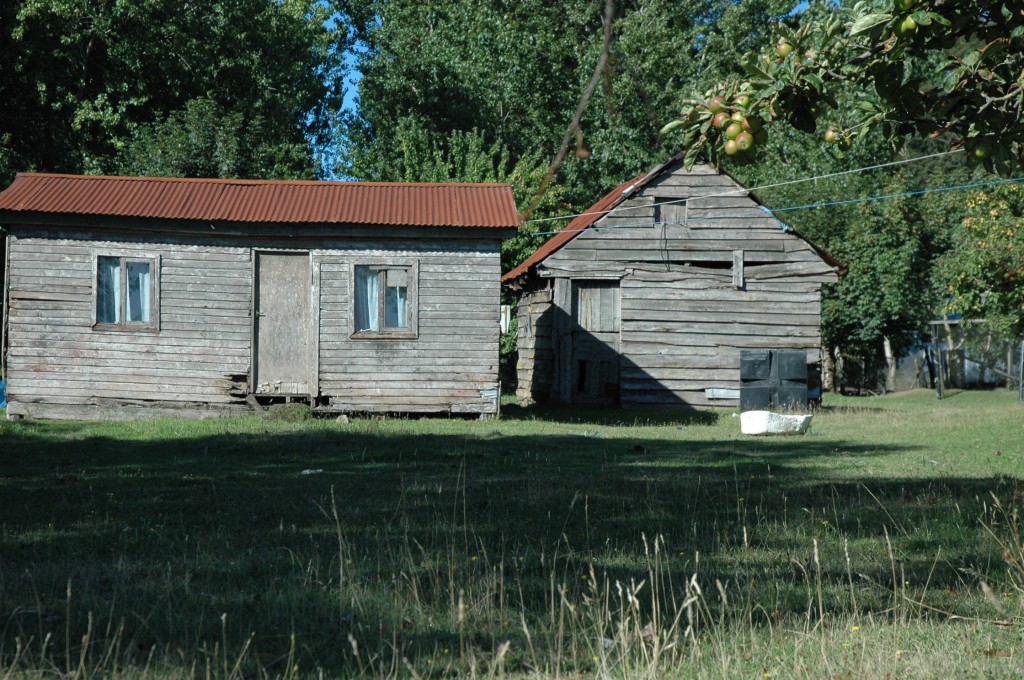 Rustic life of a neighbor 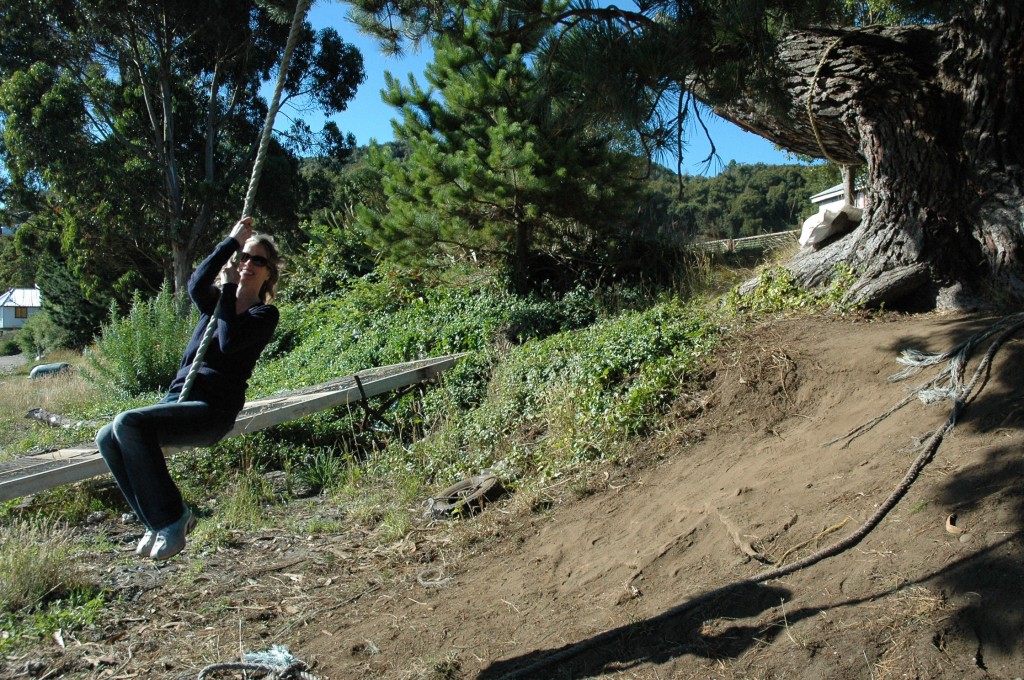 Still a little girl inside! 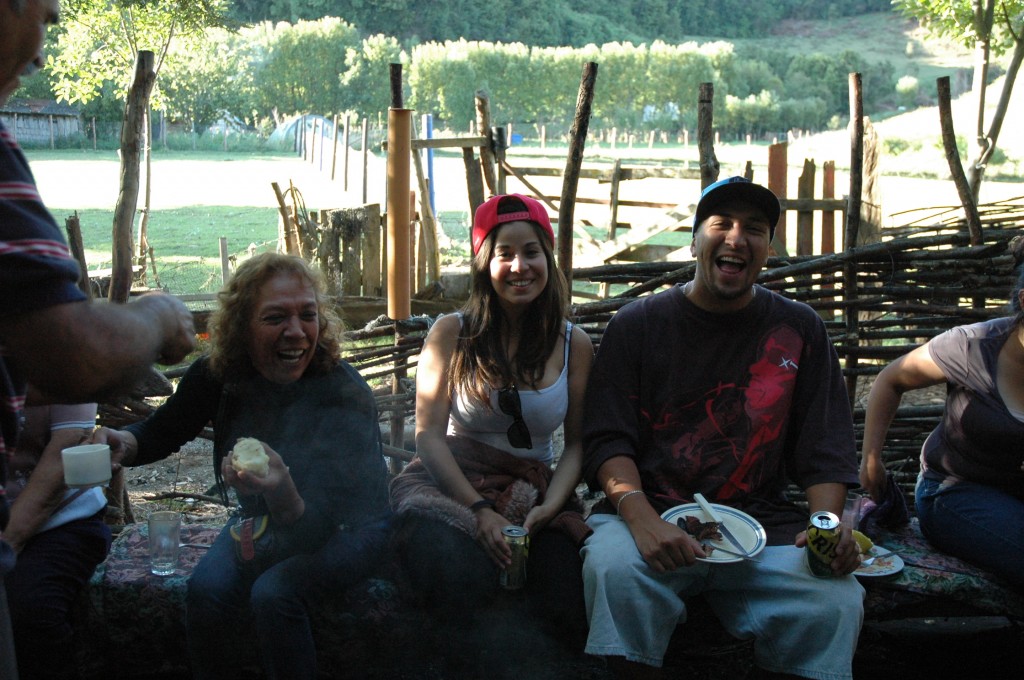 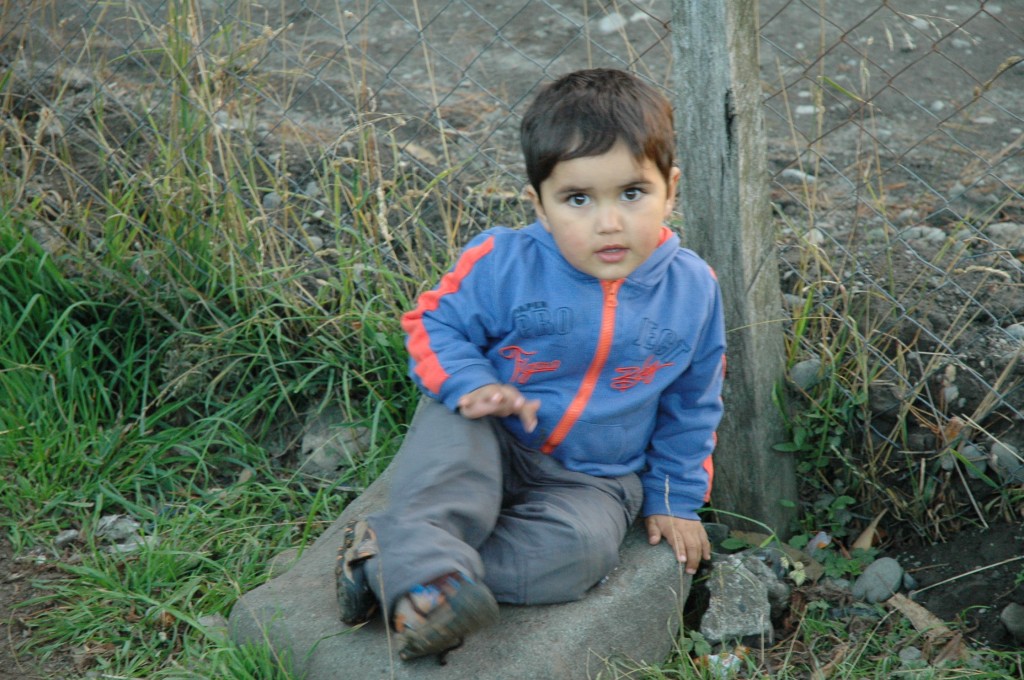 Couldn’t you just fall in love! 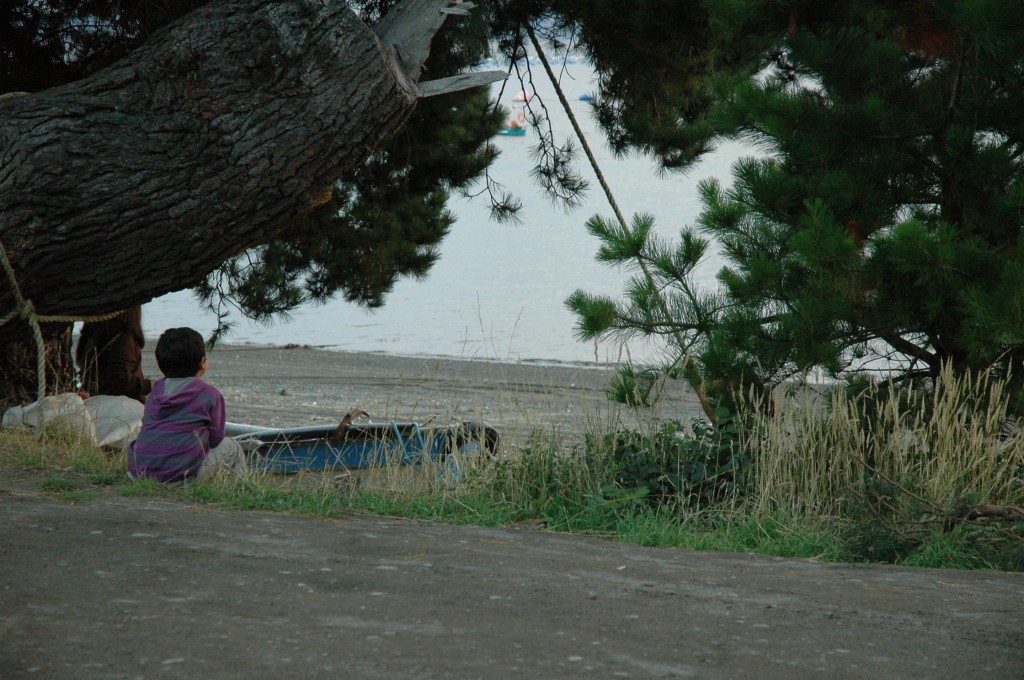 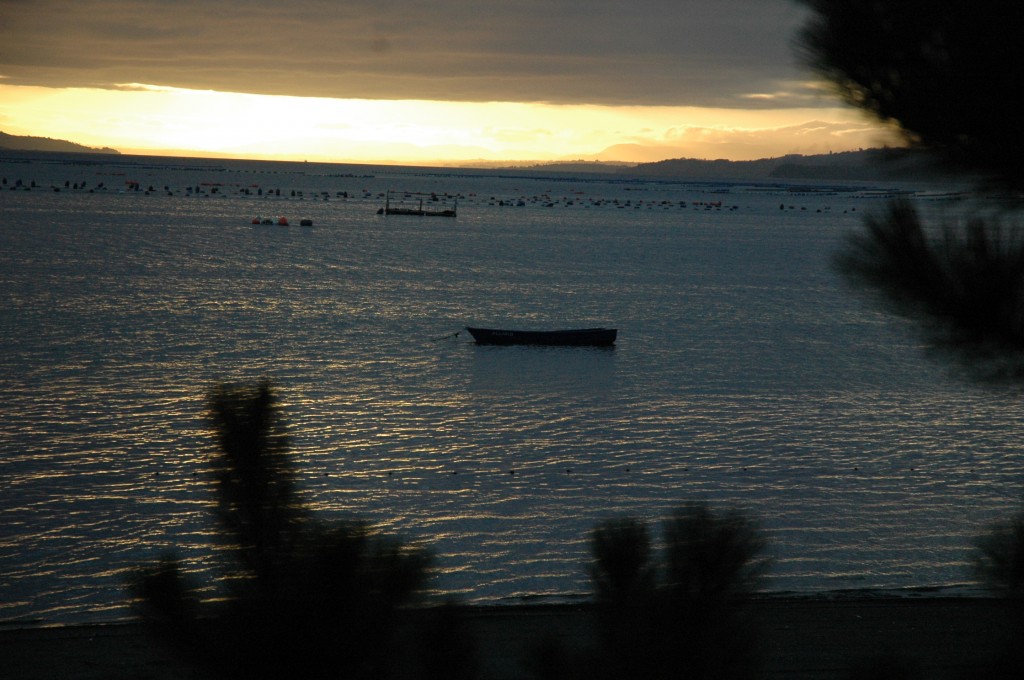 Sunset to a fabulous feast-filled day