Skip to content
EileenNovember 13, 2015 Food and Wine No Comments 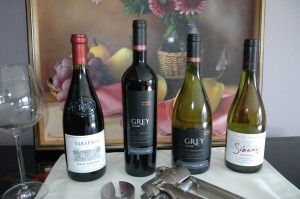 During the last eight years, we have enjoyed a vast array of Chilean wines, both red and white, and have visited several vineyards. Throughout all, we have come to the conclusion that there is no such thing as a bad Chilean red wine, but that white wines would require constant sampling to find the best of the year, at least according to our California-biased palates. I would have added “affordable” as an additional adjective to accompany “best,” but most Chilean wines are within a comfortable price range. This week, I settled upon three vineyards (viñas in Spanish), viñas Tarapacá, Ventisquero, and Undurraga. While our tastes change as we sometimes become bored and need a little excitement to stimulate the taste buds, these three vineyards and wines have become our current favorites.

Starting from the left, and in no particular order of preference or price:

This wine comes from the Valle del Maipo (Valley of Maipo) and is aged in French and American oak barrels for 8 months. As is consistent with carmenéres, it features a ruby red color, with notes of fig, cherry, plum and pepper. This carmenére has a rating of 89 points.

Carmenére is believed to have originated in the Médoc region of Bordeaux, France, but the vineyards became diseased with a fungal spore called oidium that produces a powdery mildew. Around the same time, during the 1860s, there was a massive infestation of Phylloxera mites, which are insects that suck the sap from the roots of the vines. Following these plagues, the vineyard owners elected to plant hardier and more readily available grapes, and carmenére disappeared from the French landscape. Sometime during the mid-18th century, much prior to the French blight, the carmenére grape was transplanted in Chilean soil, where it thrived in the long growing season of the central Chilean valleys of Colchagua, Rapel and Maipo. For the next 200 years, the grape would be commonly mistaken for a merlot. It wasn’t until 1994, when DNA testing was conducted in Montpellier that the mistaken identity was rectified. Today, Chile is the world’s largest exporter of carmenére wines.

This merlot is grown in the Valle de Colchagua (Valley of Colchagua), specifically from the Apalta Vineyard, and is aged in French oak barrels for 18 months. As denoted in the heading, this wine is produced from a single block of grapevines, which are hand-picked. This wine features hints of lack currents an d raspberries.

In contrast with the merlot, this wine hails from the Valle de Casablanca (Valle of Casablanca), and specifically from the Tapihue Vineyard. This wine is aged in French oak barrels for 10 months, and is noted for its bouquet of tropical pineapple and papaya.

This wine is produced from harvests in the Valle del Maipo, has a bright, golden color, and is noted for its bouquet of pineapple, orange, peach, butter and touch of toffee. This wine has an 88 point rating.

While not all of the wines that will be presented in Chile Living Today are available for export, many have and probably will eventually find their way into North American and European markets, especially as Chilean vineyards continue to improve the quality of the grape and production. I have been surprised by the wines and also the prices when we’ve traveled back to the US. Wines that are relatively cheap here can be far more expensive. Conversely, truly superb wines have been found at amazingly low prices, compared to what we pay in Chile. Either way, this new century holds a promising future for the Chilean wine industry, and are definitely recommended for wine lovers to experience.