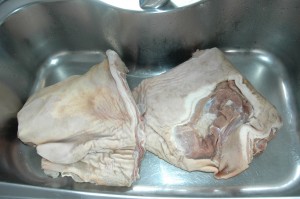 WARNING! THIS IS NOT FOR VEGETARIANS! A while back, a student surprised us with a most interesting dinner proposal. He had come into possession of some jabali, that’s Spanish for wild boar, and was interested in taking advantage of my culinary skills. Ever ready for a new cuisine experience, and although primarily a pescatarian, I agreed to the challenge. Much to my surprise, however, was that instead of a nicely dressed cut of pork, the kind that are euphemistically presented in supermarkets, what arrived still looked very much like the original food source. Although missing most of the bristly fur, what remained included a hefty amount of skin, fat and the form of its body part. Now, I have to admit that this city-born, suburban-raised girl had a momentary fit of the willies. I even had to call my husband to tell him exactly what I had just plopped into the kitchen sink. I stood in the kitchen, thinking, now what am I going to with THAT! Dinner was planned for that evening, and I had to come up with a solution pretty quickly, as I was fairly certain this was going to take a good deal of prep time.

Fortunately, as most good foodies who learn to become adept in the kitchen to appease the ever increasingly jaded palate, I had in my possession a massive collection of cookbooks. However, what I probably initially needed was a back to basics book. Nevertheless, armed with two of my favorite North American cooks, Child and Wolfert, I set upon the task of removing the traces of the jabali’s former life. It was at this point that I remembered my biology training from way back when, and gave thanks to having pursued molecular oncology instead of medical oncology as a later-in-life career change. Somehow, cutting through the jabali skin set off another round of the willies. I would have been more comfortable if it had just come with the layer of fat. In Paula Wolfert’s book, The Cooking of South-West France, she quotes Chef Alain Dutournier who said “You shouldn’t write your book until you see the ritual killing of a pig. You must understand how important the pig is to us… we will have food on our table for months…” However, Wolfert shared my sentiments, and refused to follow the advice. Some things are best left euphemistic when it comes to cooking.

Once the jabali was dressed down to less than its skivvies, the question that remained was just how to redress it for the oven. It had to be a dining experience that the students wouldn’t forget. While most Chileans are more accustomed to meats being cooked on the grill or open fire with just salt as the condiment of choice, after almost eight years of my cooking in Chile, friends were becoming accustomed to having their salivary glands wowed.

Given that jabali tends to be lean, with the majority of fat being under the skin, as the photo will attest, precautions had to be taken to assure moist meat. So with that in mind, I settled on a “go slow, cook low” method of 250 degrees F, for about 4 hours. As there was no time for a marinade, I prepared large quantity of a mustard coating adapted from Julia Child’s in The Way to Cook to help retain the moisture (recipe will follow). When the jabali was nearly cooked, I spread breadcrumbs over the top, drizzled melted butter, and continued roasting. At the very end, to further develop a nice crust, I put the jabali under the broiler for a couple of minutes. The end result was a truly delicious main course. It was something that was definitely new to Chilean palates.

The dinner was of special enjoyment as my life as an expat has opened a whole new world of fruits, vegetables, seafood and meats that I never had access to in the U.S., or even knew existed. This is especially true about fruit and vegetables. In future posts, I will present many other experiences that have made expat cuisine exciting and interesting.

This mustard coating is very simple to prepare, and can be used for many different meats. As part of my family is Irish as well as French, I couldn’t help but give the jabali a healthy dose of whiskey!

Wild Boar with Whiskey and Mustard

Juice of one lemon

Mix first 8 ingredients into a bowl and slowly whisk in olive oil until well-blended. Place meat on tray and brush with the mixture. Place in 250 degree F. oven for 3 1/2 hours. Remove to sprinkle breadcrumbs over upper surface. Drizzle with melted butter and return to oven for 1/2 hour. Then place under broiler for a couple of minute to finish toasting the crumb crust. Remove and let rest for 15 minutes to allow the juices to coagulate.

Postscript: As I was writing this post, one of our remaining puppies (our Missy surprised us with a litter of four Pointers, that’s another story!) fell asleep on top of Paula Wolfert’s The Cooking of South-West France cookbook. She was probably dreaming of good meals yet to come. By the way, this is my desk after the puppy explored every nook and cranny!