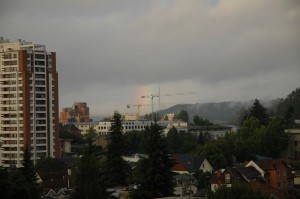 The end of 2011 had me pondering the infinite wisdom of Charles Dickens´ opening statement in A Tale of Two Cities,

During last November, more specifically Thanksgiving Day, my laptop contracted a life-threatening virus and died. At the time, I joked that my computer had decided to join Steve Jobs in Mac Heaven, but not even humor could relieve the infinite loss that overwhelmed me. Gone were years of photos, writing, research and who-knows-what-else, shamefully never backed up. Worst of all, I lost five months of notes for my last Master´s degree exam, which was only three weeks hence. It felt as if someone had ripped my heart out.

For a long time, I especially mourned the loss of the photos, which included thousands of barely-shared family photos (never made enough time, in my old life), and had chronicled every part of my Chilean life from day one. However, as time passed, I realized that what had seemed like a tragedy was really a blessing, for I found myself released from old memories and pains that prevented me from fully embracing my current life. To reference another Dickens´ story, I felt as if the burdens of Marley´s chains were lifted from me.

Starting over again, with a new computer, new photos and new memories, makes me feel as if the proverbial slate were wiped clean.  While I sincerely hope to never experience the last several months again (forgot to mention that two other computers also in use suffered the same fate as my laptop), I am thoroughly grateful to have had my eyes opened to the needless pain and burden that dragged me down, and inhibited my personal growth.  I have also learned that divine intervention can occur even through malicious acts. The above photo of a robust rainbow reaching straight down to the Earth, taken last week, was my beautiful reminder that even after devastation, there is hope and promise for better future.

Glad to be back!