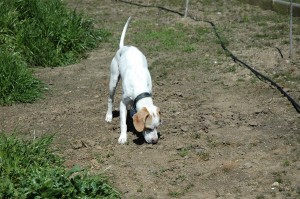 Among my circle of dear friends in Chile is my beloved English Pointer, Teddy. Teddy was born one month prior to the great quake, and became a family member just as normal life was returning to Concepcion. It was at that point that our life became anything but normal… but that in and of itself is another story.

The story that I’d like to tell today is one of how even our best friends are influenced by those they associate with. Teddy, for the most part, has lived entirely in a human world. Indeed, he is often described as my human-in-training.  He sleeps in a bed; watches TV; desires (but has not yet been given) his own chair at the table; has a refined palate for haute cuisine, but loves “home comfort” foods, such as palta (avocado), humitas, burritos, tortilla shells, really anything Mexican, chips, gin, wine and chocolates; eats from a fork and prefers bite-size pieces; is bi-lingual (or tri, if you count dog-ese); has regular showers and pedicures; and trails his blue “blankey” around the house. He is more like a four year-old boy than an almost two year-old dog.

So, I find it infinitely interesting when he picks up dog-like characteristics. During repeated stays at a doggy hotel, Teddy learned to lift his leg like a male, to give feeble and thankfully infrequent attempts at barking, and to be amorous toward his own kind. He has also made a brief appearance on youtube, when a friend’s guide dog decided to lead Teddy around the university department by his lease.

His most recent adaptation occurred while celebrating Chile’s Independence Day at a friend’s family country campo, outside of Concepcion. Early in the day, my gregarious Teddy made acquaintances with two dogs from a nearby farm. All day long he frolicked around the campo with his newfound friends, only pausing periodically for empanadas, French fries and grilled meats. 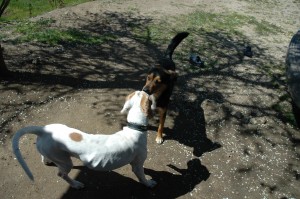 As the day progressed, I noticed that my savvy, civilized, albeit metrosexual, urban, four-legged companion was taking on the characteristics of his country cousins. The most apparent change was in how he carried his tail. Normally, it’s riding and swinging high in the air, but by mid-afternoon it looked more like an upside down question mark, and by night’s end, it was tucked tightly between his legs.

It wasn’t a matter of acquiescing to a position in the dog pack pecking order, but rather, it was a matter of mimicking what he saw his country friends doing. He wanted to fit in, and be just like they were. So, for a couple days after our country outing, Teddie strutted around the house with his tail tucked between his legs. No matter how much I cajoled him, he would not let his free flag fly. He was determined to be just like his friends were.

My mother’s words about “jumping off the cliff if your friends did it” reverberated through my mind. So, much like a parent, I gave in, and hoped that the phase would eventually pass. 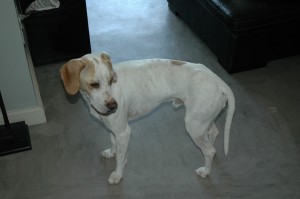 Every time that he came into sight, I would wonder just what was going on in his mind. I also thought about some of the crazy fashions of my youth, and remembered the pressure to be just like everyone else. It seems that not even canines are free from peer influence.

Fortunately, distance and time had its sway, and the appeal of this tucked-in fad finally faded away.  Although his tail is now in full swing, I am left to wonder what new pop puppy craze will have its play.