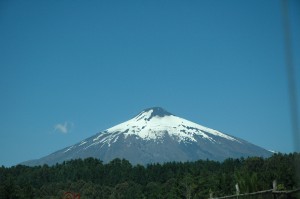 Situated along the banks of Lago Villarica, in the shadows of the Villarica Volcano, Pucon has long been a destination for those who have a passion for nature and adventure. Virtually every type of outdoor sport, from horseback riding and whitewater rafting to skydiving and snowboarding, is available to those stout of heart. Even those who are faint can find enjoyment in the beauty of the land, the warmth of the black volcanic sand beaches, the palate-satisfying restaurants and the shop-to-you-drop boutiques. Pucon is nature’s Disneyland.

Two weeks prior to the Great Quake, we had spent a week in Pucon. It was my third visit to this resort town, and I was thrilled to find that my familiarity was really just the beginning of a relationship with the region. There were still many new adventures to pursue. It was a pleasure to breathe in the beauty of the surroundings, and bask in the envelopment of nature’s arms. 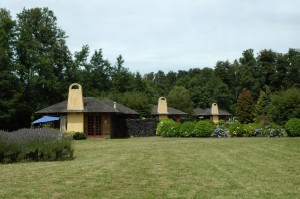 As during last summer, Sergio’s brother Manuel had invited us to share in his family’s regular jaunt to Pucon. This year, he had rented a cabana at Altos del Lago (www.altosdellago.com), located halfway between Villarica and Pucon. Of all the cabanas that we’ve had the pleasure to share, this was the most appealing for it featured a real (Chilean-style) kitchen, a working fireplace, and enough room for comfort. In a previous trip to a piscina resort in Chillan (resorts whose main feature is a swimming pool), only one person could fit in the living area… well maybe two, if one stayed perched on a stool at the teeny tiny bar that separated the kitchen (stretching the use of the word) from the rest. It was so small that when you stepped in, you stepped out.

Altos del Lago offered two swimming pools, both heated, one indoors; a playground for children (or overgrown children like Sergio and me); a club house for meetings; landscaping with magnificent hydrangeas; and fresh-baked breads delivered to the cabana every morning. Tucked well off the busy main road, there was only a faded sign at the entrance of a narrow, shared drive to indicate its presence.  With just five roomy cabanas, Altos del Lago was very private and quiet. Surrounding pines offered buffering from the noise of the outside world. The sound of the trickling nearby stream was the sweetest music to be enjoyed. 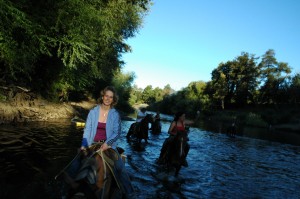 During last year’s vacation to Pucon, the thermal resort Trancura had been our source for activities. Although we found their thermal facilities lacking in cleanliness (at least to my prissy standards), the horseback riding and whitewater rafting were excellent. The horses were fresh and well-treated, and the guide allowed Sergio and me to occasionally run the horses into full gallop. The real thrill was learning to ride, crouched near the horse’s ear, whispering sweet nothings, and become one with the movement.

The Trancura rafting trip was exhilarating, although I was injured by someone’s stray paddle. As my Spanish was extremely limited, read almost non-existent, we chose to ride on the “gringo” raft, a mistake since it was replete with newbies to rafting. The worst was that hygiene was not exactly a consideration for one of the passengers. Fortunately, our bi-lingual guide, a Peruvian with the face of a conquistador, was quite skilled in both rafting and humor, and made up for the lacking of our raft mates.

On our first full day in Pucon, we decided to try horseback riding with a company that Sergio had enjoyed a number of years ago, along with The Three Amigos, our nephew Ignacio and his best buddies, Aleto and Pablo. Located just around the bend from a dirt bike/paintball place, on the way into Pucon proper, there was only a small booth and “cabalgatas” sign to designate its presence.

This cabalgatas was not equipped for credit card. So, while our horses were being saddled, we drove to a nearby mercado with an ATM for cash, and to buy some snacks for our five-hour ride.

Just before we mounted the horses, our guide, Maykol (mykelpiruja@gmail.com), asked if we had swimsuits. Apparently, there was something aquatic in store for us, but it was to be a surprise. Given that last year’s rafting trip had included jumping from a cliff into the river, I felt a slight panic. A near-drowning experience as a child had instilled a terrific fear of having my face under water.

My horse, Tapar, was an older red gelding, who had seen many a ride, but still had a good spark of life. He was outfitted with a well-padded Chilean saddle (quite different from the western saddles I had become familiar with in Oklahoma), and was a good height for me to mount with some dignity. Once everyone was saddled up, we headed out across the field towards the road. The first brief leg of our ride was through a residential area that knew the meaning of poverty. It gave me pause to consider my fortune in life.

Paved roads gave way to dirt ones, and eventually into fields and wooded areas. Seeing countryside sans uniformly planted eucalyptus and pines was a feast for the eyes. The mountains and volcano in the distance were absolutely stunning.

Partway into the ride, we stopped to let the horses rest. After Tapar and I had come to an agreement as to who was in charge, we had occasionally galloped on the dirt roads. Although he didn’t have the speed of youth, Tapar displayed a desire to be in the lead as often as allowed. Now, covered with sweat, he and my butt, were to be given a good break.

Maykol led the horses into a heavily treed area, so that they could be safely tied without fear of being rustled. Then, he guided us down a path to the edge of the hill. The sounds of a waterfall could be heard. 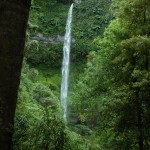 The somewhat steep path, with exposed roots for tread, led down to a most amazing sight, a seemingly thin mile-high waterfall that had formed a huge gorge from the hillside. Foam and mist sprayed as the water fell to the pool below. Such a magnificent sight!

Maykol wanted me to experience the mist of the falls, so he led me over a fallen log and slippery rocks to the far side of the pool. The water and spray was so cold and intense that photographs were impossible, and I succeeded only in becoming completely drenched. I was a good impression of a “maid of the mist!”

Years of pounding water had carved a cave just behind and to the right of the falls. Sergio, ever the mischievous tio (uncle), offered each of the guys 5 lucas (5,000 pesos, equivalent of about $10 US) if they would brave the frigid waters and climb into the mouth of the cave. Since the guys were planning on going to the local disco that night, and their wallets needed filling, the gauntlet was accepted. 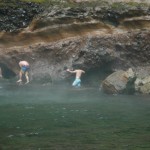 Sergio and I laughed until we had tears in our eyes, as Ignacio, Aleto and Pablo hugged and shimmied along the walls of the gorge, trying to avoid as much contact as possible with the frigid water. They were thwarted just feet away from the cave, and I’m sure that their cold-tortured shouts could be heard echoing through the gorge as they plunged into the water.  Although chilled to the bone, the guys posed for their victory shot at the mouth of the cave. It was definitely a horseback riding adventure to remember for a lifetime.

When continuous rain prevented us from enjoying any further outdoor activities, we sought entertainment in indoor recreation. A brief car ride through pastoral fields led to Menetúe Parque Termal (www.menetue.com), one of the many thermal spas surrounding Pucon.

Menetúe features three indoor and two outdoor thermal pools, saunas, Jacuzzi, massages and other rejuvenating services, as well as a restaurant, cabañas, and outdoor activities. The grounds were beautiful to behold, and the facilities were Asian-inspired and organic.

One of the features we really enjoyed was the adult-only thermal pool. It was peaceful, relaxing and restorative. Just past the far end of the pool was a mammoth stone fireplace with a beaconing fire. The ambiance was wonderful, and we drove back to our cabaña feeling relaxed and content.

While Pucon is home to many restaurants, offering both Chilean and international fare, our favorite experience, during this trip, was at La Maga (www.lamagapucon.cl). The adults in our group started the meal off with classic Pisco Sours to chase the dampness of the rain away, and prepare the body and mind for an evening of exquisitely grilled fare. La Maga is well-known for its Uruguayan parrilla, and the chefs’ preparations on the wood-fired barbeque is a fascinating exhibition to watch just before entering the establishment.

The décor was casual, relaxed and lodge-like, as befitting a outdoor recreational town. The menu is a carnivore’s dream and features grilled beef, poultry and fish. Several in our party elected to have the Roquefort sauce over their entrée. The wine and alcohol selection was expansive, and there was no challenge to find a satisfying selection. Sergio and I passed on dessert and settled for espresso to finish our fully savored meal.

Although we were not able to fully enjoy the outdoor activities due to the weather, we drove back to Concepcion looking forward to our next trip back to Pucon. Rain, snow or shine, warm or cold, Pucon has well-earned its reputation as a recreational destination, and offers new experiences to enjoy with each return visit.

Villarica is still an active volcano, as shown by the smoke emitted at the top