May 27 represented a four-month mark since Chile experienced the second greatest earthquake in its recorded history, and after much contemplation and adjustment, it is finally time to post the photos taken during the stressful drive from Lago Lleu Lleu to Concepcion.

The 8.8 quake, which is disputed to really have been a 9.2, as recorded at the University of Concepcion but rejected for insurance reasons, dramatically changed the coastline of Chile. 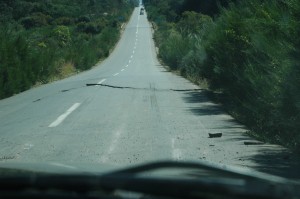 During the slow and stressful trek back to Concepcion, we were able to witness the initial aftereffects and struggles for survival. Although my digital camera was damaged in the quake, and the lens would not focus properly on closeup shots, the devastation was too mind-boggling to just drive past without even feeble attempts to capture what my eyes were seeing.

The first noticeable, after leaving Lago Lleu Lleu, was the impressive shifting, cracking and collapse of the previously near-perfect Highway 160. The photo, shown to the right, was the first shot taken, and just a small precursor of what we were yet to see. 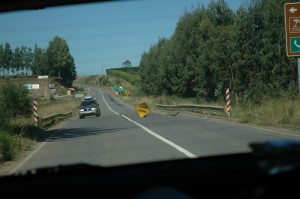 At first, the road was not much different from the typical New York State highway, rutted, cracked, uneven and bumpy, but then we started coming across objects placed over major cracks, gaps and other hazards. 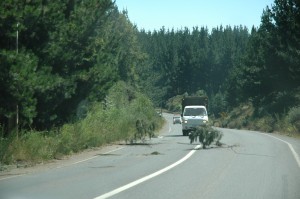 Local residents and emergency squads used whatever was available to mark problem areas. The most common marker were fallen branches stuck into crevices. The photo to the right reminds me of an attempt to follow old Route 66 in the midwestern U.S. states, sometimes the highway was so abandoned that it  just disappeared under the reclaim of nature. 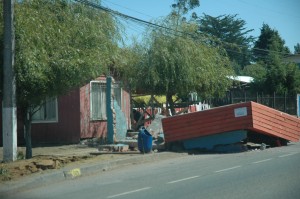 The first really shocking road shot was the collapsed bus shelter, which had been built with concrete. I was so thankful that the earthquake had happened in the early morning hours, rather than during the work day. Thank goodness there weren’t any people standing under the shelter, they would have been crushed by its weight.

The road eventually led to a bridge that had partially collapsed, and my thoughts were drawn back to the 1989 earthquake in San Francisco, California. An earthquake with a magnitude of 6.9 on the Richter scale caused the San Fransisco-Oakland Bay bridge collapsed, crushing cars and occupants to death under the weight of concrete and rebar. 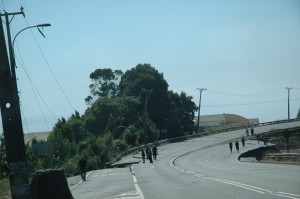 In addition to damage to the structure of the highway, landslides posed a serious driving hazard. Fortunately, the slides that we encountered left at least one partial lane for traffic to pass. Otherwise we would have been forced to turn back. 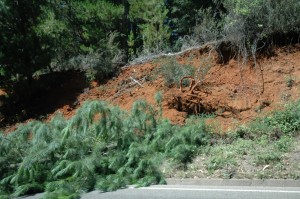 We did contemplate turning back in order to drive to the interior of Chile. Reports of closed bridges in San Pedro that filtered the news had us wondering whether we would be able to cross into Concepcion. To be that close to home, and not be able to reach our building was more than I wanted to consider at that point. 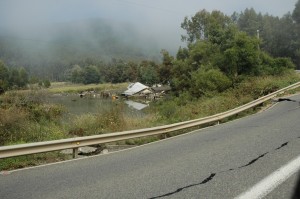 One of the eeriest sights was the intense mist rising from the ocean and rolling onto the shore. We had stopped to wait at Playa Blanca while Rene dropped his son’s girlfriend home in Lota. The mist was what remained from the tsunamis that had swamped the coastline. There were times when we could barely see the beach or town beyond.

Although these photos might seem out of focus, they are actually “clear” shots. The mist was so heavy that it obscured the view, in spite of the bright sunshine. The photo to the left shows a house that had collapsed into a river that flows under the highway and out to sea. Notice how the earthquake had also caused the road to buckle and collapse. 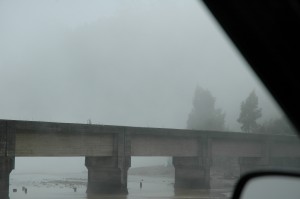 The photo to the right shows the bridge with the river meeting the sea. Although the structure was not more than 30 feet from the car, it’s outline is faded. 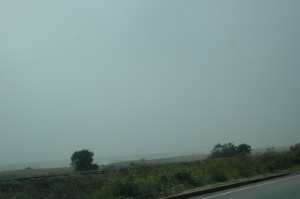 Last photo to feature on the mist is that of the beach itself, which again is barely discernible from the highway. Even on a rainy day, one would normally be able to see the coastline. 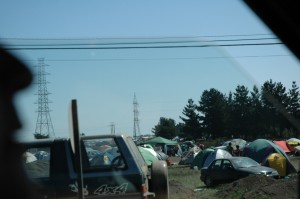 During the aftermath of the earthquake and tsunami, tent cities began to pop up everywhere. From some, it was out of necessity, from have been displaced by a severely damaged home, or out of pure fear to be in any structure that had the potential of collapsing.

These tent cities would eventually be seen running along the whole central coastline, and in the cities. Even today, four months later, many are forced to live under the protection of canvas, without any other place to call home. Winter is setting in, and at night, we can see our breath. Soon the rains will begin in earnest. The first rainfall sent families living in such abodes scurrying to dig trenches to channel the rainwater away. For some, a tent is really little more than a tarp or layered plastic. 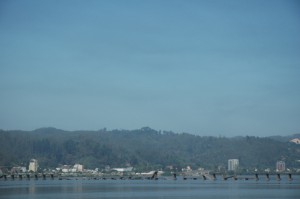 The last photo to comment on is the Llacolen Bridge, which is one of three bridges to link San Pedro to Concepcion. Although long out of commission, it was quite startling to see how the old style of construction could fall like dominos. 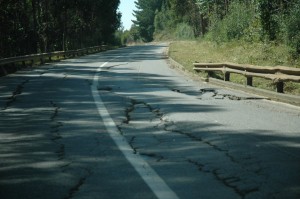 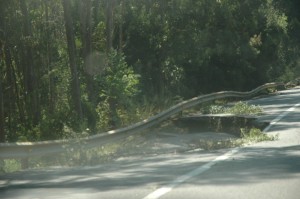 Another section of collapsed highway on the road home 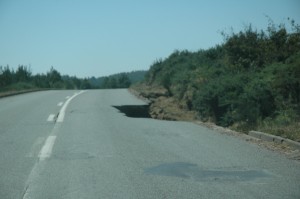 Another section of collapsed highway