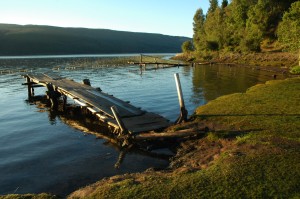 The earthquake struck about 3:30am.  Sergio and I were asleep in our tent, when we were awakened by a tremendous rumble. Suddenly, the tarp, flaps, tent and floor began to shake rapidly. Sergio’s first sleepy thought was that a storm had come in over the lake, and he partially unzipped the tent door to feel for the wind and rain. I exclaimed that it was an earthquake, and we held onto one another as the earth under our sleeping bag began to undulate violently. We watched as the corners of the tent were lifted and dropped like pistons of an engine. The sounds of the ground’s unrest roared in our ears. All we could do was hold on tight and ride it out. No amusement at Six Flags or Cedar Point could compare to the fear that Nature’s ride instilled.

In spite of my fear during the initial earthquake, I remembered my father’s laughter and knew that, no matter what, we were going to be okay.  As soon as the violent shaking diminished, we quickly dressed and gathered with our friends in an open area where we had played tennis.

René walked closer to the lake. He had taken a sleeping pill before going to bed, as he had wanted a good night’s sleep before departing for home the next day. Although we didn’t know it until much later, René didn’t know what had happened. He just saw that the water of the lake had greatly receded, and had pulled the rowboat far out into the lake. He wanted to go retrieve the boat.

Sergio realized that the water would come rushing back, and shouted to René that we needed to get away from the lake and on higher ground. We ran back to the tents, grabbed our bags, jumped into the cars, and headed for the top of the hill. Our Jeep swayed from side to side as the aftershocks continued to hit.

Once to the top, we could see people gathered in front of the camp owner’s house. As other campers lined up with our cars, we got out to join the group. All power was out, and there was only the dim dawn break to light the way. Everyone talked in hushed voices, trying to make sense of what was happening. All the while, the ground shook and undulated under our feet.

Eventually I began to feel my bladder respond to nature’s call. What had not been scared out of me with fear certainly was making its presence felt. The camp owner kindly let us use his bathroom. When we entered the house, I felt such dismay for the family. It looked like doll’s house that had been violently shaken. I began to wonder what we would find in our own home, that is, if it were still standing.

Sergio and René searched earnestly for a radio station. The only signal that could be found was from Argentina. It seemed that all Chilean stations were off the air. What news could be heard through massive static was not good. Initially, it was reported that the quake was an 8.5 in the Bio Bio region. Later, we heard that it was an 8.8, and that the epicenter in Concepcion, our home city.

For the time being, we were without electric, cellphones, and no contact with the outside world. All we could do was huddle together for support. The camp owner built a fire for everyone to stay warm, while experiences were shared. Eventually, I became very tired, and knowing that I would need my rest to deal with what remained of our world, I went to sleep in the car. Fortunately, Sergio had the foresight to stuff our sleeping bags into his case before we fled to the hilltop. Warm under the insulation, I let the earth rock me to sleep.

The Aftermath… Next Blog