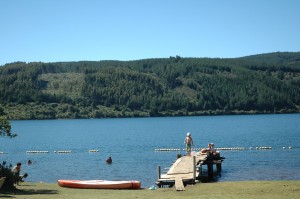 We had been back from Pucon for only a couple of days when René, one of Sergio’s lifelong friends, said that he was taking the family for camping, and asked if we would like to come. It was almost noon and they were leaving at 5 pm. Now, normally I like to take my time packing, deciding what to wear (always a challenge when it comes to casual wear; put me in a suit and heels, and I’m ready to go), but this was an adventure not to miss. We were going to be camping rustic style on the banks of a lake.

Our destination was Camp Ayelen, one of about twelve campgrounds under the western arm of Lago Lleu Lleu. We arrived just as night was beginning to set, and it was our first time putting up the tent. Sergio had said that it was bad luck to put the tent up before its first use, so I was hopeful that we didn’t leave any parts behind in the U.S. Just before leaving Buffalo on our last trip, we had stopped at Dick’s Sporting Goods to indulge in last minute shopping, and all packaging was trashed before heading home to Chile.

The tent proved to be a wise purchase and was virtually idiot-proof. Fortunately, they have come a long way since my last tent, which was purchased when New Wave was new. That one required an engineering degree.

The site chosen faced directly toward the lake, and featured a roughly hewn shelter, opened on two sides with one half wall, one full wall with shelf, and a corrugated roof. Its amenities included a suspended bare light bulb, a sawhorse type picnic table, and two benches supported by tree trunks. There was also one outlet. Everything that one would need to set up a bare-bone kitchen, without much to have to fuss over.

Camp Ayelen was not quite as rustic as I had feared for there were both hot and cold showers. Unfortunately, we didn’t discover the hot until our third day of camping. The first two days, I attempted to embrace the spirit that Katherine Hepburn possessed. She was fond of cold showers in the morning, said that it was invigorating. Although more words than “invigorating” were expressed, I do have to say that no coffee was needed to kick-start the day.

Local residents are very diligent in protecting the purity of the lake.  At Camp Ayelen, detergents were not allowed to flow into the lake. A wash facility had been erected specifically for showers, dish and clothing washing. Water stations close to the camping sites were intended solely for non-detergent use.

Lago Lleu Lleu (pronounced “gee-oo, gee-oo”) is an amazingly crystal clear body of water about two hours south of Concepcion. Pine covered hills gently slope down to the water’s edge. Houses, farms and campgrounds are nestled into the folds.

René had said that it would be the perfect place to do nothing but get bored, but we found many ways to pass the time. We swam in water where one could see clear to the bottom, played tennis on soft, spongy grass, hiked the shoreline and bathed in the sun. Clay supported the grass along the bank, and one could feel the vibrations of feet running by.

I indulged in many favorite hobbies. In the morning, I would sit at the end of one of the docks, taking in the view of the landscape while I drank French-pressed coffee and knitted my thoughts into cables and twists. My feet dangled and swayed with the rhythm of this newfound life.

Sergio and I walked the many paths that wound around the lake’s edge. We scrambled under trees and over exposed igneous rocks, pausing occasionally to pick berries and other fruits. One campground along the path had a mini minimarket where we would buy cherimoya ice cream bars and other supplies. The hikes provided an ample opportunity to photograph the majestic beauty of nature.

Throughout the day, René, Patchie, Sergio and I shared in the pleasures of simple cooking. René had brought a two-burner stove with large propane tank, and we had brought a compact one-burner. The back of the Jeep served as our Butler’s Pantry. Our red duffle on wheels held the contents of our kitchen equipment, and a thermal bag served as refrigerator. A wicker basket held wines, pastas and dry herbs to add zest to meals. In spite of this simplicity, there was little that we felt lacking.

One afternoon, while lying in our tent, I thought about how much we burdened our lives with material possessions. We devote so much time and energy working to buy, buy, buy, that we have little time to enjoy what we have. Prior to moving to Chile, Sergio and I had divested many of our belongings, and what remained left in a container almost two months before us. During the time that remained, life was so care-free. I could easily imagine what Marley would have felt if his chains were lifted.

Ah, but it’s hard to break the chains of consumerism.  Today, modern living embraces the maxim that “too much is never enough.” It leaves me wondering when is enough, enough. Even now, in spite of downsizing, our apartment is still filled with more than we need.

Our tent held two sleeping bags zipped together, and two bags with a fraction of clothes. The “kitchen” in the Jeep was comprised of the camp stove, one cast iron pan with lid, one pot with pasta strainer, a cutting board, knives, peeler, spatula, reamer, tongs, grill fork, wooden spoon, and hot pads. A plastic bag held flatware. Our favorite plastic glasses served both coffee and wine, and a French press was the lifeline to feed our caffeine addiction. In spite of living with so little, our life was lived so richly. There was little that we lacked to make life satisfying.

Lying on top of the cushy sleeping bags, I thought about all that we still owned, and realized that if we were ever to lose everything, we still had what mattered most, that was each other. Everything else was just transitory. As the Hart and Moss play exemplified, “you can’t take it with you,” so why make it life’s devotion?  At the time, I didn’t realize how that thought would help me keep perspective later on.

Every day on the banks of the Lleu Lleu was so peaceful, stress-free and dedicated to simple living that we decided to extend our vacation. Before going to Lleu Lleu, René had said that it was always a bad year when he didn’t go, and that the spirit of Lleu Lleu protected him when he did. For Sergio and me, it proved to be the vacation that saved us.

Towards the end of our camping adventure, there were several strange things that caught my attention. On our second to last day, I noticed that all of the black hawks were flying west. At the time, I joked with Sergio that they we headed off to a convention. It never occurred to us that there was some place else that they’d rather be. Also, on two different nights, I felt as if someone was walking behind me and to the left. The feeling was so strong that I stopped both times to look around. Given that we were in Mapuche territory, I thought perhaps it had to do with the spirits of Mapuche. The most personal and remarkable of all was that during our last couple days at Lleu Lleu, I kept hearing my father’s laughter. My dad had passed away in 1995, and even as I type this, I’m not sure that I could begin to describe his laughter, yet when I thought I heard it, I knew it was his. At the time, I just thought, “oh, Dad’s here.”

One of my last thoughts on our last night of camping was, “when one lives in Chile, why would one want to be anywhere else.”