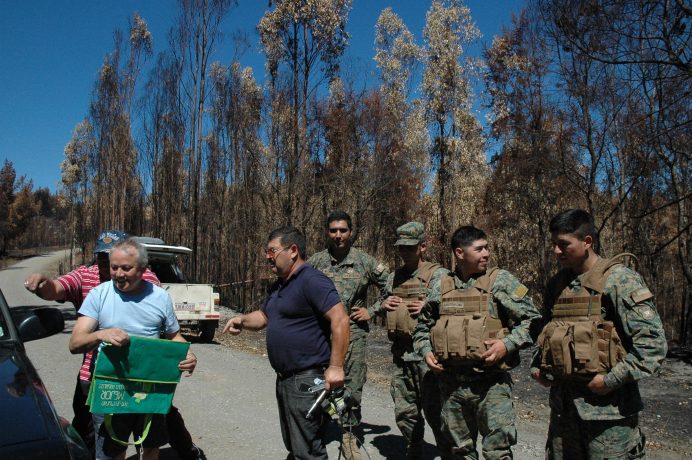 A watch set in motion by a Maker who abandoned His work is how some care to perceive this world. For myself, our Maker is an ever-moving force in my life, and there are times, such as this past weekend, when His present is most blatantly displayed. While searching for land in the hills of the Bio Bio region, one of our Jeep’s tires was punctured and deflated as flat as a pancake under the rim. At first, we thought “no problem,” as we were carrying a spare in the back, and a jack and tire wrench under seat. Our confidence quickly dissipated as fast as the air in the tire when we discovered that one of the lug nuts was slightly smaller than the rest. Apparently, one of the local auto shops had switched the original out… probably rolled into the shop’s black hole. The wrench just couldn’t get a grip on the nut. Great. We were out in the middle of almost nowhere and no other tools in the car. So, I quietly said, “Lord, please send someone who could help us.” No sooner had the words passed from my thoughts and lips, when we heard the roar of a truck cresting the top of the rise in the road. Lo and behold (really, this does deserve that opening phrase), it was a military truck carrying six young soldiers! They were out on patrol to guard against any more intentionally set forest fires that had ravaged our region.

The driver pulled to the side of the road, and a soldier who seemed to be in charge jumped out to see how he could help. Retrieving the tools from their truck, the soldier did his best to remove the stubborn lug, but their wrenches were also too big. However, God was not done with helping us yet, for another truck towing an open trailer approached from the other direction. Three men jumped out to offer their assistance. Of all things, they were carrying a mobile version of an auto shop in their truck. Not only had God sent us the cavalry, so to speak, but had also sent reinforcements!

However the true coup de grace, although thankfully not a fatal blow, was when a third truck meandered its way through the menagerie of vehicles. I looked up as it began to pass through, and couldn’t believe what I was seeing. I said to Sergio, “look at the windshield of the truck, it has a giant sticker emblazoned with my name!” Completely dumbfounded, I just watched the truck pass through, probably mouth agape. Now, one might give some allowance to the possibility of having a military truck pass through on these back roads given recent events, and the mini-auto shop on wheels might require stretching the imagination a little further, but the likelihood of seeing my Irish name prominently displayed on a pick-up truck’s windshield in Chile is about as unlikely as a penguin in the Bahamas. It just seemed to me that God was saying, “Are you paying attention?! Just want to make sure that you know I heard and answered your prayer!”

After all was put to right with the tire, and well on our way back home, Sergio and I were completely amazement, feeling enveloped in the love of our Maker, knowing that we are never alone and that we will never be abandoned. Praise the Lord for He not only goes before us, He has our backs covered as well!

Just as a side note to this story, the next day after having the punctured tire repaired for use as a spare, we drove further out into the hills, through a small pueblo where most of the residents could be found watching ongoing soccer games. Driving to the end of the pueblo, we turned around and as we passed a few houses, I heard a young voice calling out my name. I turned my head to see a young boy standing in his yard looking straight at me. Given the previous day’s event, all we could do was shake our heads and acknowledge the unexplainable. All I can say is “yes Lord,” and wonder what new movements God has planned for my life, and accept what He has prepared before me.