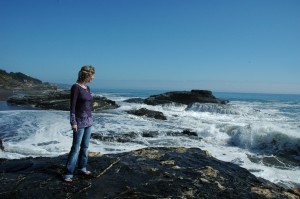 Next month is our two-year anniversary of living in Chile, and I was quite surprised to hear two different people say that I was now “almost a Chilena” (female Chilean). It has given me quite a pause to reflect on such a transformation. In my early days, I was simply known as “la Gringa.” No given name, no personal identity, just a reference.

Now, before continuing, I must comment that being called a “Gringo” or “Gringa” in Chile does not have the same derogatory meaning that it does in Mexico. In fact, it doesn’t have any racial slur whatsoever. It simply means that you are a foreigner, and not a native Chilean.

During my first year, most everyone outside of the University referred to me as La Gringa. Given that I spoke virtually no Spanish in those early days, the phrase served to perk my ears when I was part of a conversation or being addressed. Although it sometimes made me feel somewhat apart, isolated and held at a distance, I learned to take it in stride for I knew that it was not said with the intentions of being hurtful. If anything, it may have kept the user safe from the fear of growing too close to someone who could potentially go back home.

Indeed, several of our Chilean friends and family were greatly surprised that I didn’t, or didn’t want to, turn around and go back home. Even though Chileans are very proud of their country, they were usually surprised every time I said, “me gusta Chile!” While it may have been the sheer fact that I was saying anything at all in espanol, I do think that Chile’s struggle in becoming a developed nation has made the people modest, admiring and respectful of other countries. Even famed Chilean comic, Coco Legrand has joked that Chile is “like the testicles of the dog.” While the humor refers to Chile as being the most southern country, it also alludes to the status of a dog.

For myself, I have no problem in appropriating the horn to stand on top of the Andes mountaintops and shout, “I LOVE CHILE!”

The words that best capture my feelings of the move to Chile are Mark Twain’s, used in his book Roughin’ It, to describe the departure west of himself and his brother Orion, who was the newly appointed Secretary of Nevada Territory,

We jumped into the stage, the driver cracked his whip, and we bowled away and left “the States” behind us.  It was a superb summer morning, and all the landscape was brilliant with sunshine.  There was a freshness and breeziness, too, and an exhilarating sense of emancipation from all sorts of cares and responsibilities, that almost made us feel that the years we had spent in the close, hot city, toiling and slaving, had been wasted and thrown away.

While my years spent as marketing and public relations director for a cancer treatment group, as community crusader in the fight against cancer, and as advertising guru for business-image-challenged, were far from wasted, I do feel as if my soul has been set free. I can finally breathe again.

Somewhere during the passing 24 months, there was a general shift away from La Gringa to the use of my given name. At first, I didn’t notice the change. It had been a gradual process, so gentle that it didn’t catch my attention until about six months ago. It seemed that the more I adapted to my new way of life, the more my name came into use.

I did, however, note when two people, on different occasions, days apart, said that I was “almost a Chilena.”

Since then, I’ve been contemplating how different was “La Gringa” from “Almost Chilena.” So far, I’ve come up with the following:

• I ditched the U.S. jeans for the more flattering South American ones (especially when I discovered that I had some semblance of a butt… the difference is in the cut) Indeed my former attire has been pushed to the back of the closet in favor of my Chilean wardrobe

• I wear a lot less makeup, and have even gone into public au natural (in my previous life, I would put makeup on just to take the garbage out)

• I no longer suffer from the “Cinderella Syndrome,” falling asleep at the dining table at the stroke of midnight (Chilean dinners run into the dawn hours)

• I’ve learned to love pisco sours, even though one can put me under the table

• I smile more and frown less

• I’ve learned the art of water-on-demand (small wall-mounted heaters warm water as needed, which means in the shower, freezing and scalding are not far removed)

• I can cook in a kitchen the size of a closet, with other people in the room

• I’ve learned to drive comfortably on streets where three lanes equate two in the U.S. (same holds true for parking)

• I’ve come to embrace the Chilean way of greeting and saying goodbye, an air kiss to the right, cheek briefly touching cheek. More importantly, it is customary to say hello and goodbye to each person, individually, rather than as one general group hello/goodbye.

•  I’ve come to accept that mayonnaise is not just a condiment, but also a side dish (mild hyperbole; in Chile, mayo is used on just about everything, including pizza!).

There are many more differences between today and two years ago, but for the sake of those reading this, I will save you the agony of my self-examination. The most relevant point to carry forward from this muse is that to be a successful expat, one must not be afraid to grow, change and adapt. There are times when it can feel like being out on a limb, grasping branches and leaves from each side. However, at some point, the decision has to be made as to which tree you want to stand upon. For myself, although I still carry the leaves of my home country, roots are being set into my new turf.

One thought on “Almost Chilena”