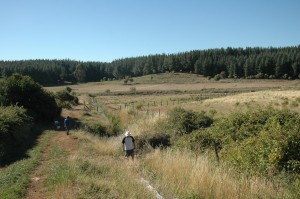 Dear friends, who own a farm in the rural area of Mulchen, invited us to participate in the cutting of the wheat and to enjoy a little Chilean country living. Although the trip was wrought with mishaps from beginning to end, there were moments of such country bliss during our stay that it was easy to forget that anything troubling had occurred. Thank goodness for moments of absolute contentment!

They say that things happened in “threes.” Well, we seemed to be twice “blessed” for our challenges were in double-triplets.

The morning for our departure had me wondering whether “sometimes God hides,” as was posed in a King Crimson song title. I awoke to find that the washing machine that also pretends to be a dryer (an all-in-one) failed to drain, and hence never dried the towels. Everything had to rung out by hand, and hung on the balcony. In spite of following the manufacturer’s supposedly careful instructions on how to check for blockage, I managed to flood the entire hall with water and soapy residue. After mopping up the mess, I proceeded with my normal morning routines of dishes, cleaning up after the semi-trained puppy, vacuuming, washing the floors, and so on, while also rushing around to gather all the belongings needed for the trip.

There were suitcases to pack, food baskets to fill, fishing gear to retrieve and dogs to lasso with collars and leashes. Just as everything was lined up at the door and ready to go, we had an aftershock strong enough to shake the cabinets and appliances. This had me scurrying frantically to put away all the dishes drying in the rack, and move anything fragile to safe and least-likely-to-fall places.

Finally ready, we embarked for Mulchen. While fueling the car in Los Angeles (Chile), Tammy our English Pointer puppy urinated all over the front passenger seat, after a futile walk around the gas station grounds. At 2 ½ months, she still couldn’t grasp the concept of grass being an appropriate place to deposit bodily fluids. Her mishap forced me to sit upon piles of plastic grocery bags, enduring wetness and odor for the remainder of the ride.

At that point, I thought, okay, we met our obligation of three things going wrong. We were home-free. The momentary sense of relief was abruptly ended, however, when the love of my life misconstrued the green light at the ticket booth, and miraculously stopped within inches of the closed tollgate. Then I knew for sure that we were on “Family Vacation.”

We were also starting another round of “threes.”

Fortunately the first day improved, with a long walk through massive raspberry patches and across verdant fields. Arriving at the farm before our hosts,we decided to do a little exploration on our own. We strolled along the cow paths, ate berries to our hearts content, and laughed as our four-legged babies frolicked and splashed in the rain-filled ruts left by ox-drawn carts. The sun was shining and its warmth caressed our shoulders. The sounds of birds, horses and cattle floated upon the air. We breathed in the sweet, fresh air, and felt completely removed from the dirty sidewalks of Concepcion. 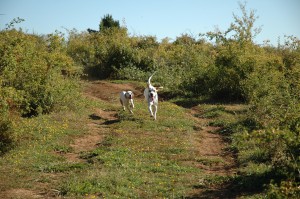 That night, we enjoyed an Onces (a late evening Chilean meal) of pan asado (yeast-raised bread), chicharrones, paté, queso (cheese), and a peppery Portesuele (small pueblo an hour north of Concepcion) red wine. After the meal, the men decided that they wanted to go rabbit hunting. Not wanting to be part of the hunt, as I preferred to be oblivious to whence my protein originally came, I headed to bed with my puppies at my feet.

At one point, I was awakened by gunshots, and knew that the men were successful in their hunt. Five shots were fired, and five rabbits were carried back to the house. Later, I was awakened again by the sounds of conversation and laughter. When my heart of hearts finally came to bed, he relayed all the events that had transpired that night.

The laughter had been inspired by a friend’s mishap that had caused a table and everything upon it, including the friend, to go flying into the air. It was just the foil that the men needed to shake off the potentially dangerous situation they had found themselves in.

While hunting, the men came upon a cattle poaching and slaughter in process. Fortunately, the poachers saw the hunting light before the men arrived, and they elected to flee rather than confront. The confrontation could have been far bloodier than the scene they left behind. What the men found was the gory remains of a cow, whose legs had been hacked away. Caught early in their crime, the poachers didn’t have time to take any more than that. The next day, we learned that a second cow had also been killed, but not butchered.

Poaching seems to be a fairly common occurrence in rural poverty and hunger-stricken areas. Another friend, who owns several pine and eucalyptus farms, has often lost his prized horses to those seeking to improve their deprivation. 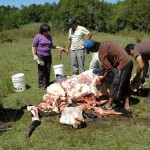 The owner of the cows, after removing meat for his own family, offered the remainder to those in need. So, a couple of the men in our group volunteered to assist in the butchering and distribution. I went along to photograph the crime, and was appalled by what my camera caught. (I have debated whether or not to include a photo, but have decided that it’s important to not hide our heads in the sand to social/humanitarian issues. I hope that the thumbnail photo is small enough to not offend)

Having once practiced vegetarianism, and with a current preference for “pescatarianism” (fish-included diet), it was troubling to see and ponder the trauma experienced by these unfortunate creatures. While I have grown accustomed, once again, to eating 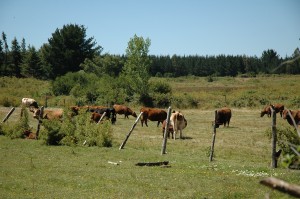 meat, as in Chile it’s impossible to escape (vegetarians plates often include a choice of chicken or ham in many restaurants), I would rather that it be done as humanely as possible.

What I saw in the field was anything but humane. It was so disturbing to imagine the fear and anguish that the poor animals had suffered.  After taking some photos to capture the tragedy, my sweetheart and I took a long walk to the other end of the field where an abandoned house stood. It was better photograph the bones of a long-forgotten abode, than the bones of a mutilated animal. 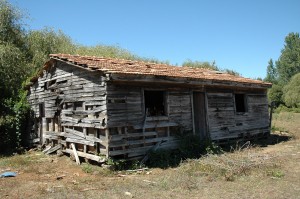 Abandoned houses have long held my fascination, for I enjoy imagining what it must have been like when the house was new, the lives subsequently enjoyed within their walls, and the reasons that caused their protection to be left behind. My love for such relics has been so captivating that friends have even given me photos of dilapidated abodes, labeled “Eileen’s Dream House.” I am always curious to see how people live.

The house appeared to have been abandoned for quite some time, and I wondered what had precipitated the last family to move away. It was a simple, one-storey, wooden structure with central hall and four or five rooms. The hall had been painted green, and one of the rooms, perhaps a bedroom, still had unframed religious pictures on the wall. Additional outbuildings were in varying states of collapse. A grove of trees and stream stood behind the house. All portrayed a simply lived life.

The slaughtering of the cows introduced me to an uglier side of a life spent in poverty. Although there have been times of difficulty and financial struggle while growing up, my adult life has been greatly blessed with bounty. It is hard to imagine a life so destitute that rustling a cow seemed like the only possible means of filling an empty belly.

The meat removed from one of the cows was taken back to the farm, to process and then distribute to families in and around Mulchen. This act of kindness was both a benefit and a disaster. While many families benefitted from the distribution, the farm and house became inundated with swarms of flies. The flies were so numerous that it seemed like a biblical plague. They were everywhere, and ultimately made the house and dining unbearable.

Although refraining from eating meat, and partaking solely in the freshly picked vegetables and baked bread, our citified, FDA-accustomed bodies succumbed to infection. Thus ended the second round of things happening in threes. 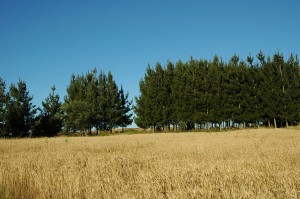 In spite of the irritations, we found Mulchen to be endearingly beautiful and natural. Farms dot the countryside, and the sounds of goats, sheep, pigs,cattle and horses resound across the rolling land. It was pure pleasure to traipse across the fields, dig up potatoes and pick vegetables in the garden, pluck blackberries as we strolled along the cow paths, and enjoy the flora and fauna.

Our perdigueros (English hunter pointers), Tammy and Teddie, aka TNT, fully immersed themselves into the life of country dogs. They explored every nook and cranny around the farm, and happily chased after anything that had legs and moved. Teddie was so enthralled and occupied with his frolics that he refused to eat for the first couple of days. By the end of the weekend, he was looking a little worse for wear, but was grinning from ear to ear. 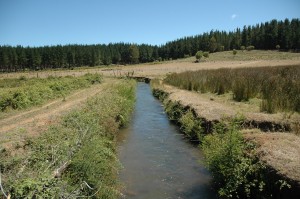 As it was summertime, the ground was very dry and dusty. Water supply is a serious issue for local residents. In the rural area around Mulchen, the challenges of water shortages were addressed by creating a vast system of canals that funnel the precious liquid from the Bio Bio River to various farms. Although not suitable for consumption, or at least not advisable, the water is used for indoor plumbing, field irrigation, and animals. The rapidly flowing canals are also a source for bathing (“a country Jacuzzi”) and laundry.

The Bio Bio River was also a wonderful, late afternoon respite for swimming. It was the first time that 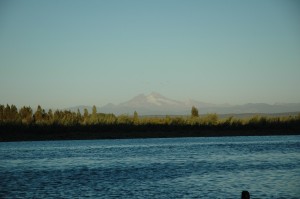 I had ever swam in a river, and the water was so refreshing and thrilling that it will be a long remembered experience. It was the first time that I wasn’t afraid of my feet not touching bottom, and my customary side-stroke (can’t put my head under the water after a near drowning as a child) was just perfect to enjoy the panorama of mountains, including the “Mantura del Diablo“ (Saddle of the Devil), which could be seen in the distance.