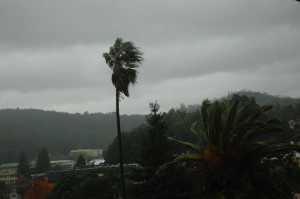 At the beginning of the week, we awoke to ominous, black clouds, winds that whipped the tops of pines and palms like blades of grass, and rain that pelted the windows with such force that they bounced back out to be airborne again. Columns of misty fog marched across the grim gray sky.

It would have been a great day to just stay in bed, watch movies, surf the web, snuggle with the puppies (we have two now), and eat from the freezer, but it was Monday morning. Fortunately, the storm had awakened us early enough to enjoy at least the snuggle and surf, while classical music shuffled in the background.

Winter is beginning to set in, and the rains are a frequent occurrence. However, this system front was so intense that it caused havoc throughout the day and week, from La Serena in the north all the way down the coast to Lebu in the south, and inland to Santiago. Flooding was rampant everywhere, most particularly in poorer neighborhoods. Fallen leaves and other debris were caught in sewer drains, causing massive backup of rainwater. Schools were closed on the second day of the storm front.

Coastal communities were being pounded especially hard. In Coronel, waves were measured at more than 7 meters (21+ feet). The intense waves jostled moored fishing boats like toys in a child’s bath.

While a tempest brewed on the west coast of Chile, magma was churning, releasing plumes of smoke from Volcano Copahue in the eastern border with Argentina. A red alert for eruption was declared, forcing the evacuation of everyone within 25 kilometers around the volcano. More than 10,000 quakes have been attributed to the volcano’s unrest.

Volcano Copahue is located in the Alto Bio Bio region, not far from where we had spent the summer camping. Although many families were being evacuated by bus to Ralco and Santa Barbara, there were several refusing to leave their livestock and homes behind. Poverty is especially prevalent in this very rural part of the region, with many living a hand-to-mouth existence. Families do not have the benefit of a private insurance to replace their home and stock should they be lost to flowing magma, ash and rock. To ease the burdens of the families, animals both large and small are in the process of being transported to safer meadows. 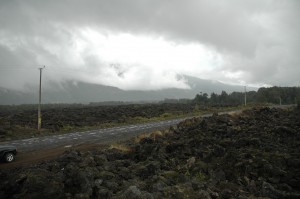 The destruction of lava flow is impressive. During a month-long excursion through the Araucania region, we stopped to take photos of the solidified lahar flow of Volcano Llaima. Lahar is a volcanic mudflow of water, pyroclast, rock and other debris. Llaima is among Chile’s 36 active volcanoes (including Copahue to the north), and for the last several years, has been spewing fumes, ash, and occasional lava from its crater. In 1994, Llaima had a major eruption, with a lahar flow that reached the community of Vilcún, destroying everything, including numerous bridges, in its path. Fourteen years later, the area is virtually barren, with only small vegetation scattered across the craggy surface. The road has been restored, and a rustic stand has been constructed for viewing. Beyond that, little can be done with the terrain.

For now, all that can be done is to wait, wait for the rains to abate, the seas to calm, the volcano to erupt, or not, and pray for the safety of all.