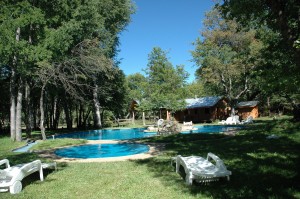 Anxious to get away from Concepcion for awhile, and to not be reminded of being far from loved ones, we awoke early on Christmas morning, packed suitcases and our “traveling pantry,” and headed out with friends in search of a cabaña resort near the thermals of Chillan. Our party included three young-at-heart adults with a passion for cooking and play, three truly young adults with a passion for eating and play, and two perdiguero (Chilean English Pointer) puppies willing to eat anything in sight. It proved to be the perfect traveling combination for a weekend getaway.

Located two hours away from Concepcion, the Chillan region is home to an active volcano, Volcan Chillan, and some of the best thermal waters. At the foot of Volcan Chillan, in the midst of the Andes mountains, lies the Valle Las Trancas, where a number of resorts are nestled. Activities range from year-round termals to skiing the Andes in winter, and trekking, mountain climbing, canopy, horseback riding, and other outdoor sports during the summer.

Our initial choice in resorts, found on the internet, proved to be a disappointment. The facilities were poorly maintained, the buildings looked rundown, and the grounds were littered with trash. It was hardly the ideal backdrop for our Christmas adventure. Fortunately, we had passed a number of resorts along the way, and I said a silent prayer that we would find one that was dog friendly.

My prayer was answered at Cabañas Antue, which had one remaining cabaña for the weekend. Although it was furnished for four persons, everyone was willing to accommodate, in true Chilean fashion. No one wanted to waste precious swimming and sitting-by-the-pool time looking for another. It was charming, had a great pool, and was close to shopping, thermals and the disco (vital to every young, single man in Chile). At $40 mil pesos, about $80, for one night, it was a bargain for six people.

The cabaña featured a living area, fully functional kitchen (refrigerator, stove, microwave, cookware, dishes, etc), two bedrooms and one bathroom. The bathroom was very clean (I’ll save my dissertation on Chilean bathrooms for another post), and offered a Jacuzzi tub, much to my surprise. The living room had a wood burning stove, two small, rustic sofas, tables and satellite TV (Direct TV). A large deck, with built-in seating and a picnic table, ran across the front of the cabaña. There was even a small vestibule entrance, as well as sliding doors to the deck.

The setting was beautiful, natural and peaceful. Glimpses of the surrounding mountains could be enjoyed through breaks in the trees. Large grassy lawns provided ample space for badmitten and other pastimes.

While the guys started the grill for a late lunch, I quickly got everything settled in the cabaña, and then shed all of my cares down to a bikini. In all of my Christmases, never have I worn so little. Countless years of Arctic Buffalo winters usually found me clad in so many layers for warmth that movement was minimal. Now, I was going to swim under the warmth of the blessed Chilean sun. Such a spiritual release!

The first day, we did little more than eat, drink, swim and play at the resort. We had arrived as adults, but quickly found our child within. Other visitors to the resort shared in the same routine.

Two little French girls quickly bonded with Teddie and Tammy, our Perdiguero guaguas (Chilean word for babies), who, when not romping with their newly found canine mates, were being affectionately hugged and pampered. Their family was from the Provence area, and were visiting an older sister in Santiago. I tried to remember what little French had been retained after decades of not being used, and the family struggled for English. We ended with a truly international mix of French, English, Spanish and German.

Adolay and Heribelt, the young single men in our group, finished the night at the disco, with assurance of not to worry about their return to the resort, while the rest of us slept like babies.

The next day, we repeated the same routine, with an added excursion to see the thermals, casino and take a short hike. On the way home, we stopped at a Mote con Huesillo festival for a respite. Mote con huesillo is a Chilean drink/dessert that has barley wheat, dried peaches, water, honey and sugar, and is definitely one of the Chilean comfort foods.

Our two days and one night were so low key and enjoyable that I was reminded of Meg Ryan’s character in “Kate and Leopold,” when after spending a stressless day wandering the streets of New York with the 19th century man-out-of-time Leopold, she comments, “I feel sooooo relaxed!” and eventually drifts off to sleep. As a former high-stressed advertising/marketing, nose to the grindstone, director, I often related to Ryan’s character and her need for “a break.” Now, my life in Chile has me feeling like a woman out-of-time, or better yet, a women with all the time to enjoy life. It’s the Chilean way.