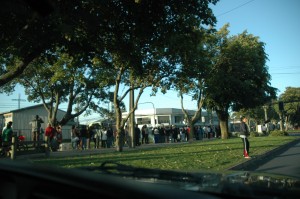 As a child of the 60’s, I was fully indoctrinated with “duck and cover” in grade school, crawling under my desk or covering my head and crouching in the halls. However, such education sorely lacked what to do after crawling out into the aftermath. Then after 9/11, several television shows on mass destruction and “what should you do when [such and such event] happens” flooded the airwaves. Virtually all of these shows focused on what to do during a cataclysmic event, but not on how to survive for the long term. Thus, when the first great Chilean earthquake of the twenty-first century occurred, we had to create our own guidelines.

Our first challenge, as a sixth floor apartment dweller, was to resolve a need so vital to the existence of human and animal kind, namely water. Throughout the region, finding a source of potable and even non-potable water became a daily quest. Long lines could be seen at public fountains, broken water lines, and even sprinkler systems. No resource was beneath the level of dignity when it came to providing this most elemental need. 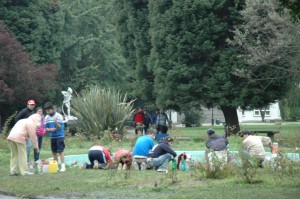 We were fortunate enough to have a cistern behind our apartment building. While not suitable for cooking, at least by our squeamish decision, it would be used for flushing. Everyone was allotted approximately one gallon per day. The bottled water, purchased before leaving Lago Lleu Lleu, had to serve for drinking, cooking and dish washing.

I never appreciated how much water we wasted everyday until I had to be conscious of every drop we used. We had to rethink how and what we would cook because our supply was limited. Water used for pasta was saved for the next pasta, or used as waste for flushing. Grounds from boiled coffee would be used to preserve our two potted rose bushes. Beans were not a good option because of its need for soaking and our lack of a pressure cooker.

Dishwashing was a challenge. The goal was to use as little water as possible without sacrificing cleanliness. Coralia had set up a washing system similar to that used in the labs, and I employed that in our own kitchen. Three small bowls were set up in the kitchen sink. One held a little soapy water and sponge. The second held water and a measuring cup to rinse soapy water off and into the bowl. The third bowl was set up similarly for the final rinse. At the end of the day, the first and second bowls were used as waste for flushing, and the third bowl was poured into the first. Needless to say, dishwashing became a long and tedious process, but it saved on water, which I was thankful to have.

Waste and cistern water was used for one daily flush of the toilets. One bathroom was used designated for solid waste. Clorox was poured into the toilets to keep odor and germs to a minimum.

Personal hygiene was reduced to a minimum. We were able to brush and rinse our teeth with bottled water, wash faces and hands using water poured into a fresh bowl. Also, residing in the apartment, we had a fresh wardrobe to change into every day. Deoderant lived up to its advertising, and perfume became a welcomed addition. Thankfully, some water service was restored to parts of the city by the fifth day after the quake. One of our apartment building neighbors, Jaime, operated a pre-university education program in a free-standing house which had running water. Although the water was extremely cold, our first shower in days helped to revitalize our weariness.

Our food supply was also limited, and we learned to be very judicious in its use. Our breakfast consisted of crackers and butter, with a main meal reserved for the evening. Homemade pesto from the freezer carried us many nights, and was eventually replaced with a sauté of chopped garlic in olive oil with dried herbs and crushed red pepper flakes. Meat leftover from our need to grill-everything-remaining-in-the-freezer carried us for several days.

All of the major grocery stores were destroyed after the earthquake, and only a few Mom-and-Pop shops dared to open. Acts of price gouging drew strong and critical comments on the radio. One small market was reported to be selling a liter of milk for the equivalent of $20.

One morning, a large truck rumbled through the neighborhood. Volunteers were distributing groceries donated by one of the major chains. Each bag contained a sundry of flour, pastas, beans, canned sauce, sugar, dry milk and a few other items. As we were already equipped with enough food, we reserved the milk to donate to the hospital nursery, and placed the rest in the hands of the University’s student-operated food drive for communities destroyed by tsunamis.

I was thankful that my maternal grandfather had instilled me with his belief in keeping a stocked pantry. His philosophy carried me through snowstorms, ice storms, power outages, rough times and now an earthquake. Even as an apartment dweller, I kept the tradition. My downfall was that I chose to freeze sauces, vegetables and fruits instead of canning. Provided that canned bottles would have survived the quake, we would have had a more balanced diet. Alas and but also fortunately, hindsight is twenty-twenty, and in these semi-normal days after the “Big Quake,” I will have to endeavor to overcome such delinquencies. As it was, the earthquake proved to be the diet we were searching for to lose unwanted winter weight.

In addition to the loss of water and electric, gas services were out. Having spent most of my life living in the northeastern part of the United States, I was familiar with occasionally living without one or the other due to snow or ice, but never all three. I was very grateful that we were in early autumn and not winter. For the time being, only cooking and light would be an issue. We were back to basic living, much like pioneers, only with the modern day convenience of propane grills, pre-manufactured candles, and battery-operated radios.

The one tool that I sorely missed every morning was the electric coffee grinder, and I discovered just how much energy I was willing to invest just to satisfy my addiction. When coffee, previously ground for the vacation in Lleu Lleu ran out, I was compelled to grind the old-fashioned way, with mortar and pestle. Thirty minutes of hand grinding beans resulted in enough grounds for a few mornings, an extremely tired right arm, and a great appreciation for my ancestors way of life.

While coffee provided some sense of rejuvenation, it could not heal the post traumatic stress that we were all beginning to suffer. Daily emotional fatigue and jittery nerves were taking its toll on everyone’s psyche. While we had basic food, water and a roof to provide for our bodies, we lacked the structure and familiarity of civilized living that had nourished our minds and soul.