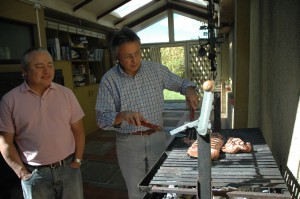 When I was a young girl, Sundays were a day for families to get together for a leisurely meal, jovial conversation, naps on the sofa, walks around the neighborhood or property, and unfettered fun. The day didn’t require massive scale planning and reorganizing of schedules, it just simply happened. Most times, not even a phone call was placed in advance. It was just presumed that a gathering would occur.

Then, sometime during the 1980s, that began to change. I’m not sure what prompted the transition, whether we were trying to live too big in the Big 80s, or if we had made our lives more complication in the pursuit of worldly happiness, but the simple pleasures of a Sunday began to disappear. The change was so gradual that we didn’t realize what had happened until the joy of the day had disappeared.

So, it was a great pleasure to find that, in Chile, Sundays are still days devoted to family and friends. The day can entail a caravan of cars traveling down the coast to one of the countless seafood restaurants, or simply a casual afternoon meal featuring grilled meats and a range of side dishes.

Yesterday, we enjoyed such a day. It was simple, relaxing and low-key. My brother-in-law grilled tenderloin, while my sister- and mother-in-law prepared a variety of salads. We popped the wine that had warmed near the fire, while our nieces and nephew hung out, talking, joking and laughing.

There was no special event, no birthday, anniversary or holiday, just simply a family day. There was also no need or feeling of having to “get the day over and done with,” as can often be felt in the U.S., where Sunday means the day before Monday, the day that we have to drag ourselves back to work.

One of my favorite parts of the Sunday family barbeque, is standing around the charcoal fire, waiting for one end of the meat to be seared enough to sample. The chef de jour removes a large piece of tender, juicy meat, which is then sliced into small bites for everyone to enjoy. I often think that more meat is eaten around the grill than the table. Indeed, we’ve even attended events where the meal itself is partaken in thus a fashion, with dishes of potatoes, salsas, tomatoes and other dishes literally placed off to the side for picking at will. However enjoyed, the first samples are a common ritual that I’ve grown quite fond of here.

Our Sunday found the family sitting around the table, talking for hours after the meal and wine were finished. Everything from Obama’s recent visit to Chile, discrimination in the U. S., and the differences in Pinera’s administration compared to Bachelet’s, to the state of Chilean medical schools was discussed at the table. Afterwards, when some resolution of the topics at hand were achieved, we gathered close together, in front of the television, to watch Huachipato and Colo Colo have a go at one another in football (soccer) rivalry. In actuality, everyone else watched while I dozed with my head tucked under my husband’s chin. I have no clue who won, but probably felt more well-rested than the players. The best part was that nobody minded what one chose to do. It was just the pleasure of being together.

When nine o’clock rolled around, the table was set once again for “onces.” We partook in one final meal of ham, cheese, scrambled eggs, warm bread, tea and coffee, and then headed home to watch the Chilean version of “who wants to be a star,” have a short snooze on the sofa surrounded by our puppies, and then sleepily went to bed.

Such is the life on a Chilean autumn Sunday!