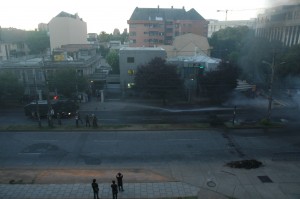 To paraphrase CSNY, this winter, I hear the drumming, students in protest in Conception.

University students are in protest, and sometimes physical conflict, with the police all throughout Chile over issues of access and public use of funds for higher education, as well as the building of a hydro electric power dams in Patagonia.

The conflicts at our local university became very violent last week. It began with a peaceful march through the arch of the campus, with banners flying and drums beating the rhythm. The students were exercising a tradition that has been accorded through generations in Chile, which is the ability to voice their opinion regarding issues touching their sensibilities. It is an acknowledged privilege that is exercised at least a few times during the school year.

Although we didn’t stay long enough to watch the scene turn violent, the sounds that reached our apartment on the hill overlooking the neighborhood surrounding the campus, the sight of tear gas clouds rising into the air, and the sting of pain that touched our eyes, forcing the closure of all windows, more than indicated the changing tide of events. There was little doubt that a small faction of participants had engaged in physical confrontation. Televised videos, as well as remnants of debris and damage to the campus, confirmed its transpiration.

The following day, another protest occurred in the late afternoon/early evening. I was in the office working on notes for an upcoming exam when the shouts, drums, chants and barking street dogs eventually penetrated my concentration. This sent me scurrying to collect laptop, handbag, coat, gloves, and books, so that I could make a quick dash to remove the car from the parking lot before mirrors, wiper blades and any other semi-attached part became an implement to lob at police. I also didn’t want to get caught in the foray.

This past Sunday marked another day of violence at the university. It was Día de las Glorias Navale, which is celebrated every May 21 to commemorate Arturo Prat Chacon, and his role in the Naval Battle of Iquique, during the War of the Pacific (1879-1883). Formal ceremonies and parade, as well as a presidential address to the nation and parliament, were conducted during the late morning, early afternoon. While the address to the nation was being interrupted by the unfurling of a banner, “No a Hidroaysen, Patagonia Sin Represas” (No to HydroAysen, Patagonia without dams), protesters gathered outside. Violence once again gripped the attention of the nation.

Curious to see what was taking place on campus, and eager to get out, we walked to the office in the cold and drizzle. I grabbed the camera to see what the lens could catch.

On Edmundo Larenas, a street that flanks one side of the campus, we found people taking cover behind trees that line the 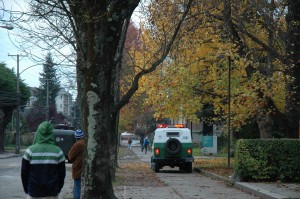 sidewalk, while watching the conflict between carabineros (police) and protesters. Everything seemed in slow motion. Protesters would throw rocks and whatever other items would sail through the air, then there would be a long pause, after which the police would fire water back at the protesters from massive, battered water engines, then another long pause before rocks would be hurled again. After watching several rounds, we decided to head into the campus proper. As it was Sunday, and there were no officials to give authority to the police to enter campus, we knew that the interior would be relatively calm. All of the action was taking place along the perimeter, and thankfully the use of tear gas had been banned.

The interior campus seemed far removed from the skirmishes taking place outside. Children rode their bikes, people walked their dogs, and families strolled calmly along the many walkways. It wasn’t until we reached the vicinity of the arch that the sense of danger began to be pervasive.

As a show of force, a cavalcade of carabineros on motorcycles rode to the main entrance and blocked its path. At the far end of the arch building, which houses our office, groups of carabineros on-foot formed tight, protective packs, with shields positioned to block impact from hurled objects.

Concerned with being caught in the middle of any exchange of force, we hurried to the building, unlocked the gate to the entrance, and rapidly closed it behind. Once safely ensconced in our office, and from the balcony that extends across the building, we could watch the proceedings without fear of injury.

The first time that I peered over the balcony’s edge, I heard the police react below. They were definately aware of every movement, including my sudden appearance. When I heard their reaction, I jumped back a little, not knowing if I would be shot at. It was one of the rare times that I was thankful for my gringa looks. They recognized that I wasn’t a threat, but merely a spectator with a camera.

We watched the interchange, from the balcony, for a couple of hours. As evening set, I noticed how the skies looked as dramatic above as what was taking place below. Nature was expressing its own conflictive mood.

Our position from a bird’s eye view allowed an opportunity to observe strategies on both sides. The police would periodically pull back and separate to entice the protesters from the protective borders of campus. It also provided a distraction for one or two police to take hidden positions from which to nab an unsuspecting protester. The protesters themselves would periodically intensify their noise and onslaught to drive the police back. It was more of a cat and mouse game than an actively engaged battle.

I began to wonder just who the protesters were, and whether they were even students from the university. The conflict seemed half hearted as the evening set in. To put it very plainly, it seemed like they were doing it just for the sake of doing it, and not because they burned with the fire of a cause.

I couldn’t help but feel that the violence taking place below was really undermining the intent of the march that I had witnessed days earlier. I couldn’t stop thinking about Gandhi’s and Martin Luther King’s methods of peaceful resistance to effect change.

Since last Sunday, I’ve been thinking about my own generation in the U.S., and its seeming placidness. We followed the heels of the ’50-60s generation, and as their children, or love children, our upbringing changed our fire of expression into a pursuit of economic freedom, rather than a political one. Perhaps that is because it was the only frontier left to fight, or perhaps we learned to work change from within the system rather than at odds with it.