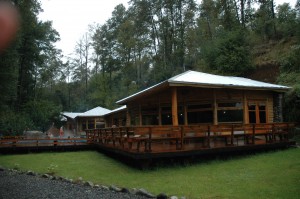 The wind was blowing fiercely on the afternoon that we left for Pucon. Winter was beginning to make its presence felt. The skies were grey-white, with clouds forming a heavy blanket over Concepcion. Leaves and trash danced wildly in the streets, moshing pedestrians, street dogs and cars alike. Although the weather was ominous, the anticipation of a relaxing weekend in the shadow of the Villarica Volcano was keeping my thoughts warm.

It seemed strange to conceive that Easter was upon us. I was still grappling with having all of the seasons in opposition to what had once been familiar. It was supposed to be a time of rebirth, but it felt more like the sorrow of death. It is no wonder that Good Friday holds more relevance here; it is more fitting to the mood of the late autumn season.

As we headed into the countryside, the day began to remind me of early November in Niagara County… moody, cold, but still bearing the colorful wardrobe of red, greens and gold. Rain was pouring down, smoke puffed from chimneys, and cows wandered freely in the thinned-out cornfields.

Our itinerary was a simple one, a late afternoon lunch at Vaca Loca (Crazy Cow, a favored restaurant when heading south), and then a steady push to reach Pucon. The trip was supposed to take about six hours from Concepcion, but it was soon apparent that the cyclonic winds would make the drive far more strenuous and slow.

It was nightfall when we reached the vicinity of Villarica and Pucon, and the surroundings were pitch-black, with the exception of car lights ahead and behind our own. The winds had wrought tremendous damage. Uprooted trees and broken limbs had brought down many power lines, causing electrical outages everywhere. Numerous collisions had blocked the main rode into Pucon, and traffic was backed up for miles.

Our original plan had been to get settled into the cabaña, and then do a quick shop at the grocery. However, realizing that it may be awhile 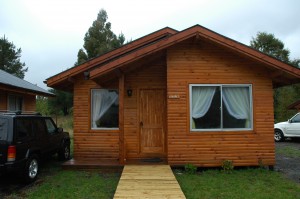 before the area would be back to normal, we made a quick stop at a small market, which was alit with flashlights and candles. Although, we had brought meat and other food items, there were still key ingredients, such as bottled water and wine, missing. Now, added to the list were candles.

We were relieved to find that the cabañas had a back-up generator. While power was limited, and we were asked to conserve as much as possible, at least there would be heat, light to get settled, refrigeration and running water. 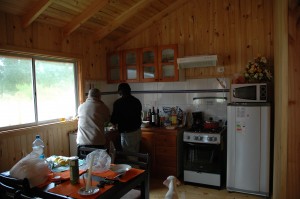 Our cabaña turned out to be warm, comfortable, and much larger than its outside appearance. There was one main room for sitting, dining and cooking, with two bedrooms off a small hall, and one bathroom with shower to share. Importantly, there was a complete kitchen (with stove, refrigerator, microwave, blender, electric teapot, dishes, glasses, pots, pans, and other sundry items) in which to prepare our meals. The all-plank construction of the cabaña, with cathedral ceiling, exuded rustic 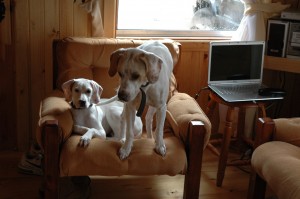 For our first night, candlelight set the mood for coziness, and a hearty black bean soup chased away the chill.  Although the power would periodically come on and then disappear, we gave in to the ambience of flickering candlelight, sank into nicely cushioned chairs, and with tummies full, gave into indulges in web surfing while jazz and blues swirled in the air.

The next morning, we were surprised to discover just how much damage had taken place, even at the cabañas. A tree across from our weekend residence had split in two, collapsing on the short fence that separated a large grass lawn from the circular drive. In the darkness of the previous night, we had driven past, without even noticing. Thankfully, our other friends had arrived safely, and were quartered in the cabaña next to our own.

As the rain still continued to pour, we elected to stay in, prepare ceviche and other dishes for the Good Friday meal, and just enjoy the company of one another. There was no need to “have to do something,” just hanging out was satisfying enough. It was meant to be a low-pressure weekend.

By the third day, however, “cabaña-fever” was beginning to set in. So, we deemed that there was little else to do except “make the difficult sacrifice,” and subject ourselves to one of the many thermal spas that surround Pucon. After some quick internet searches, we settled on Montevivo, which is about 27 kilometers from Pucon proper, in the Curarrehue Valley (www.montevivo.cl).

Located in tranquil and picturesque surroundings, Montevivo is a relatively new thermal spa that features one large indoor thermal pool, as well as two smaller outdoor ones (featured photo). The cost for our afternoon’s relaxation was a modest $7.ooo per adult (about $14 USD). Although, there was a restaurant featuring gastronomic delights, we decided to save our appetite for a grill back at the cabaña.

The indoor thermal was very large and organically designed with rustic wood and river rocks. Our early afternoon arrival allowed virtually undisturbed peace and relaxation. Few people occupied the pools, and those who partook either spoke quietly amongst themselves or not at all. The hot, mineral water relaxed the body while soft music lulled the mind into meditation.

As much as I relished the indoor pool, I found the outdoor ones to be exhilarating. The surrounding woods and volcano in the distance created a beautiful and natural backdrop for sentient delight. While the body was immersed in the hot spring water, the skies caressed the face with a soft, misty rain. It wasn’t until my fingertips had shriveled like prunes that I was ready to depart.

For the remainder of our last full day in Pucon, we gathered to grill meat, sing karaoke in the cabaña club house, enjoy a fine meal, and end with several rounds of dominos and cards played late into the night.

As luck would have it, Easter morning sported a little sunshine, before the rains returned. It was just enough to remind us that behind every cloud is a ray of hope waiting to give light.