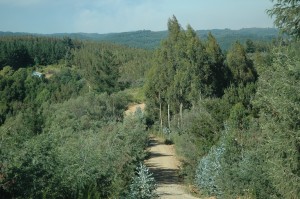 To make the most of the remaining weeks of summer recess, we headed out on the road to rediscover our sanity and regain zest for life. The first part of our revitalization was to be devoted to sun, fun and the beaches of Reñaca, while enjoying the myriad of activities in Viña del Mar.

Rather than traverse the usual grind of Ruta 5 (Route 5) to Santiago, and then west to the coast, we opted to be more adventuresome, and follow winding roads along the Chilean coastline. We had often wondered what lay beyond the ridge of hills that separated Ruta 5 from the coast, and now was the chance to disclose the mystery.

The initial leg of the trip began slightly inland, passing through Coelemu and Quirihue, 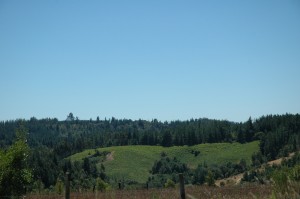 before heading toward the coast to Cobquecura, and then north through Curanie, Pelluhue, Chanco, Constitution, Llico and Reserva Nacional Laguna Torca, Pichilemu (where we thought to spend the night, but had to press on to Viña), San Antonio, Casablanca and finally Viña. We passed through communities great and small, traversed through a rather mountainous terrain right along the coast, caught glimpses of the diversity of everyday life, and all in all came away with an amazing array of visual memories.

A short distance out of Concepcion, we had turned onto an unmarked route to Rafael/Coelemu, and were barely on the road, really just beginning to relish the excitement of unexplored territory, when traffic came to a dead stop. For more than twenty minutes, we waited, too far back to see what the holdup was. A woman selling tortillas stopped and said that they were doing something with concrete. So, we thought that they were laying a new road, but when finally able to pass the block, it was nothing more than the unloading of concrete conduits for sewage. Why they needed to block both lanes was beyond imagining, but as my partner said, “they´re engineers, what do you expect!” Such is road construction in Chile. The two things that you can count on are unfathomable delays and vendors going from car to car. One person´s delay is another person´s opportunity to put food on the table. 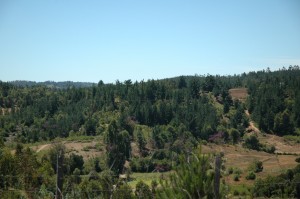 Although the semi-planned route seemed like a fairly straight line on the map, it rapidly turned into a sinuous snake. Rather than roads of design, they seemed like paved-over cow paths. While the road twisted and turned, there was much for the eyes to feast upon. Pines blanketed the hillsides for as far as could be seen. Occasionally, small signs marked the turn-offs to diverse and innumerable beaches that dot the coast. Although it would have been nice to digress from our semi-mapped course, and explore sands hidden from view, we pushed northward. 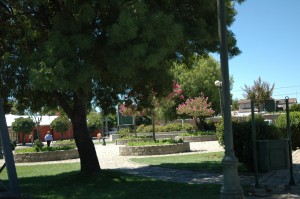 fishing villages. I am constantly intrigued by the nature of life in small Chilean communities, and this trip inspired much contemplation. Regardless of size, most feature some sort of a town square, or at least a town “lawn” for people to gather, children to play, and vendors to sell. Life is not lived just within house walls, but as part of a greater community. During the summer months, festivals celebrating harvests of various vegetables and fruit, bring people from even the rural outskirts into “town” to rejoice in being alive and among friends. We passed through one community flying banners for a “Festival del Membrillos”, that is a festival of the quince. 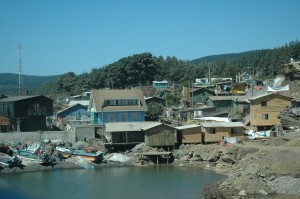 Many villages struggle with abject poverty. Access to employment beyond farming, fishing or supplying the basic of community needs (small markets, school, etc), often presents great challenges. Even though Chile has far-reaching bus transport systems, the distance and time can make many opportunities less than realistic. So, I often wonder how these communities, many as old as 500 years, survive.

The ultimate conclusion of all my contemplations is of how fortunate I have been in life. Even when times were tough, which thankfully were not that many, my life was far easier than what many Chileans experience. Since moving to Chile, poverty, and especially extreme poverty, has gained new definition and parameters. In spite of the poverty, people here are, for the most part, are warm, friendly, and willing to share what they have. If there is one universal characteristic of low economic status, it´s that those who have the least are often the ones willing to share the most.

Although original thoughts were to spend two days in leisurely travel, the lack of procuring hotel reservations in advance, forced a one-day whirlwind ride. We arrived in Viña, late in the evening, slightly stressed from losing our way in the dark, and on poorly marked roads, with only an occasional gas station attendant or wandering resident to point the direction to the next thoroughfare. Surprisingly and gratefully, family awaiting our arival, also had a wonderful dinner awaiting. After the first sip of wine, we were ready to embrace days of endless beaches and mesmerizing sea.

Rather than bore readers with a play by play of the drive, photos and brief synapses of will follow. Hope you enjoy the visuals!

Pines As Far As the Eye Can See 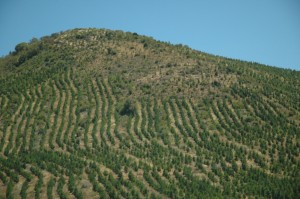 Pine trees are to Chile what cornstalks are to the U.S. mid-west; they can often be seen as far as the eye can perceive. Pine and eucalyptus farming comprises a major GNP in Chile, and it is estimated that existing plantations cover over 2 million hectares. During my first year here, I was always struck by what at first glance seemed to be natural forestry would rapidly reveal its true identity in the evenly planted rows of trees. It is such an orderly enterprise, and one that is coveted by many aspiring millionaires for its revenue-producing capacity. Equally as coveted are the almost 4.5 million hectares that are classified as primary forest. The natural beauty of Chilean forests is breathtaking, and truly a national treasure. 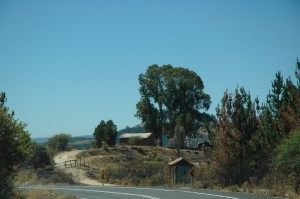 With the exception of immense commercial farming conglomerates that feed the world, most rural farms still practice basic techniques. A number of months ago, I had seen an article in the New York Times that wrote about U.S. farmers who were approaching Amish and Mennonite 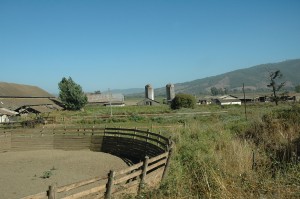 communities to learn methods that predate John Deere. The article was read with great mirth for much of the farming here still involves real horsepower, dragging an attached plow, as well as a set of human arms to steady the process.

The rural farms make me feel transported back in time, and I take great pleasure in photographing, and fantasizing about the simple pleasures of life lived there. Even though I know that farming is among the most demanding, labor-intensive, and least profitable means of existence, nostalgia often blurs the hard edges. 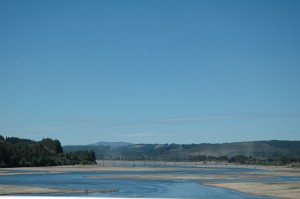 Countless rivers and streams carry the run-off of melted snow and other waters from the peaks of the Andes down to the Pacific shores. Some are crystal-clear, while others are muddy with residue, or beds of rolled stones that only flow viscous during the spring. All, nonetheless, provide infinite appeal. 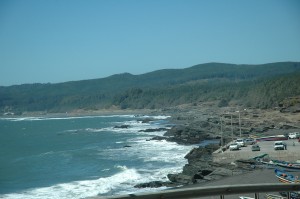 With over 4000 miles of Pacific shore, Chile is a water-lovers and photographer´s paradise. Those who had visited Chilean shores prior to 2010 would be greatly surprised and impressed by the changes wrought by both the earthquake and the tsunami. In some areas, such as in the vicinity of Lebu, the earth was lifted almost 9 feet! In addition, the shoreline was moved farther out to sea; in some areas, as far as 1000 feet. Fishing villages, such as those south of Concepcion, that once launched boats from generations-old piers, now have to tow their boats out to water. The city of Concepcion itself, is estimated to have moved 10 feet to the west. 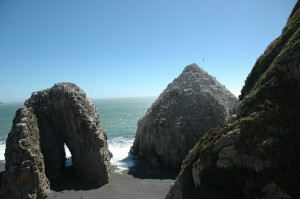 Constitucion was among the most-hardest hit coastal towns during the 2010 earthquake and tsunami. At one point, the BBC reported than more 300 bodies had washed up on its shores. The community´s entire seafront and heart was completely washed out to sea or pulverized into a mass of debris. Today, there is a wide expanse of vacant land that 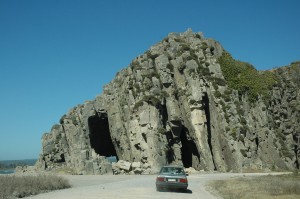 separates the sea from the remaining town. The road that follows along the coast is, at times, difficult to recognize. While, it was hard to imagine the trauma on such a sunny afternoon, it was also hard to not feel the emptiness.

Among the most impressive sights to see in Chile are the massive rock formations that time and water have created at the shore´s edge. 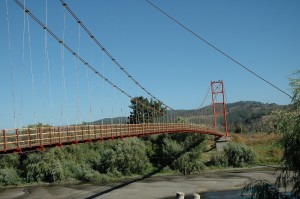 Every once in a while, I come across something that reminds me so much of home, and surprises me infinitely. Such is the case with Licantén, a community of a little over 6000 residents, which features a suspension bridge that crosses the Rio Mataquito, and to my eye, has an uncanny similarity to the Golden Gate Bridge. This suspension bridge, however, is strictly for pedestrians. All created for the pleasure of crossing to the other side in style, as well as enjoying the beautiful views of the river. 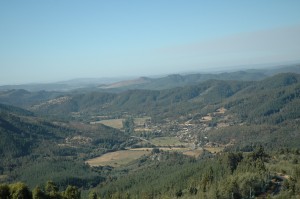 On the road to Vichuquén, we came upon a dedication to the Virgen del Carmen y el Niño Jesus, erected by the town´s mayor, Roman Pavez López, in December 2010. The statue looks over Vichuquén, nestled in the bosom of massive, rolling hills, and the seven treacherous turns of road to reach the valley´s floor. The views from this vista were impressive. 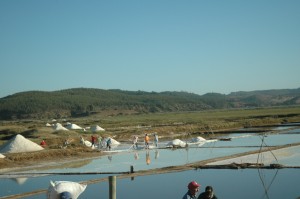 What, at a distance, looked like rice paddies, turned out to be salt fields. Although I had never given a thought to how a daily used condiment was acquired, beyond the grocery shelf, it was intriguing to see just how salt is organically harvested. As can be seen in the photos, large, shallow, flat beds are created to allow the sun to evaporate the seawater, leaving behind the salt.

Several stands nearby were selling various types of salt, each designated for a use, such as cooking. Although there hasn´t been sufficient time to play with our purchase, I am curious to discover whether there is a difference in taste.

This was our first visit during the peak of tourist season. Surprisingly, the city and beaches weren´t nearly as crowded 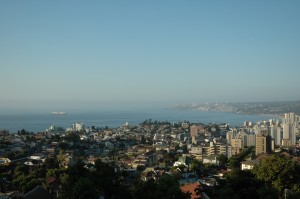 as had been expected. This was partly due to the abbreviated summer vacation for students (result of prolonged protests), and also, the annual music festival was still a few weeks away.

Viña continues to be one of my favorite cities in Chile, and I still dream of moving there. The city is beautiful, clean, international, and offers extensive amenities and activities for all ages. The beaches are long, with fine sand, and the boardwalks offer everything from food and trinkets to massages and blood pressure readings. Restaurants, discos (be sure to remember that night clubs here are the equivalent of strip clubs in the U.S.), boutiques, and a first-rate mall is within walking distance of the beach. Further down the road, Reñaca (north) and Valparaiso (south) offer the same, and are tourist destinations in their own right. All in all, the region is truly a paradise.

Packing for the Trip

As had been promised in an earlier post, I kept many lists of what to pack, which tends to be my primary question when traveling. Unfortunately, the list for this segment of the trip has been misplaced. Nevertheless, what I do recommend is taking a mix of lightweight summer clothes, swimwear, and at least one pair of jeans/pants, sweater and jacket. The weather in Viña is similar to San Francisco, warm during the day, and cool, verging on chilly at night. Also Viña and Reñaca are playgrounds for the rich and famous, and therefore tend to be very fashion and label-consious.