It was a cold, drizzly Autumn Saturday, and the afternoon cried out for a return to normal weekend life. In Chile, regardless of the weather, weekends are perfect for drives along the coast to enjoy the beauty of the ocean and savor the daily catch at one of the innumerable restaurants dotting the main roads.

Our destination of choice was Lenga, a small fishing and beach community, southwest of Talcahuano, and yet unknown to our eyes. According to Adolay, one of our “adopted nephews” and companion for the trip, Lenga had been spared from the mass destruction of the tsunami, and was most likely to have businesses open.

It was around dusk when we arrived in Lenga. As we drove into town, I was surprised to see the number of cars parked along the road, and the groups of people strolling on the beach. Families were even posing together on the breaker wall to capture the day’s adventure in pixels. It seemed that we weren’t the only ones longing for normalcy.

Much to our amazement, virtually every ocean-side block was packed with a plethora of Mom-and-Pop restaurants and shops. It was far more than we had expected to find, and it was apparent that our challenge wasn’t to find one restaurant open, but to scout out the most appealing among many.

After parking the car, Sergio stopped a local woman crossing the street to ask her opinion of what was the best in town. A restaurant favored by the locals had to be good. The woman gave a smile and then nodded towards a building on the far corner. Her preference was Puerto Elero, housed in a blue, one storey building with many windows to watch street life go by.

Puerto Elero was a large, boisterous family-friendly establishment, with children running around the tables, and conversations loud and joyful. The accoutrements were simple, tables were grouped to accommodate many, and the floors were bare. It reminded me of a Midwestern diner, casual, unpretentious and carefree. 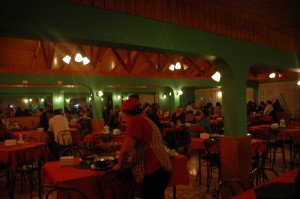 We were longing for pescado frito, that is, fried fish, and this seemed to be the perfect place to satisfy our hunger. We started our meal with pisco sours and appetizers of locos prepared two ways, one with mayo and olives, and the other with onions and cilantro. The locos arrived tender, and were served with both a Chilean-style potato salad and shredded lettuce. The pisco sours were perfectly mixed, and elicited exulted sighs of relief.

When walking towards our table, I had noticed that plates were left behind, presumably half eaten, and I thought, oh, oh, that’s not a good sign. However, when our order arrived, I understood the reason for leftovers, for our plates each held an entire side fillet of congrio. For those who have never seen congrio up close, it is a large, long eel that can easily feed an entire family. Now, half of a congrio was being served to just one. Teddie, our new family addition on four legs, was going to be quite happy with his subsequent feast.

The batter was fried to a perfect crispness, leaving the fish succulent and moist. As an accompaniment, I had chosen puré picante, a mashed potato with merken, which is a smoky dried ground hot pepper. The puré was smooth, creamy and well balanced in seasoning. Sergio selected a simple tomato salad, which was fanned across a separate plate. Sopapillas were served, but hardly touched in favor of the main entree.

Adolay had requested a bowl of mariscos, and was in bliss with each spoonful. He raised a spoon to show that generous mix of seafoods. Shrimp, scallops, baby squid, fish, and other sea animals were mingled in a rich broth.

Although the fare was simple, it was well prepared, and a pleasure to eat. The ambiance of Puerto Elero may have been modest, but the meal was rich in flavor and satisfaction. On such a gloomy day, it was just what our spirits needed to be raised.

All in all, we drove back to Concepcion feeling happy and sated. We had found seafood Heaven in a most surprising place.