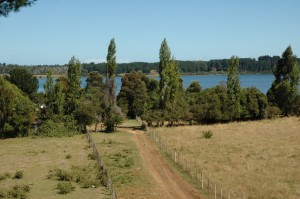 There are many ways to experience Lago Lleu Lleu, the cradle of our earthquake experience. While the earth had convulsed in seismic waves during Chile´s 8.8 quake, and the land had risen more than 9 meters, my mate and I hugged one another close as we watched the corners of our tent rise and fall independently of one another. Although the damage awaiting us in the aftermath was awe-inspiring, we were kept safe from real harm. So, every year we make a sojourn to the lake to remember our sparing and to give thanks.

This year, cousins invited us to share in their weekend plans at the lake. They had rented a small, octagon cabaña, with a splendid view of the lake from it´s hillside perch. Although the cabin was intended for six people maximum, and really provided comfort for four, we managed to squeeze seven adults, two teenagers and two children within its very cozy walls.

This particular family is very closely bound, in love and friendship, and no one gave much mind to sharing chairs, standing or sleeping upon the floor. A little discomfort was worth the sacrifice in order to be together.

This gave me pause to consider how broken many modern families have become. Electronics have taken the place of face-to-face conversations, game playing with live human beings, and laughter derived from shared experiences, essentially all that had once been the norm for earlier generations. Mega McMansions now provide an environment for family members to almost completely avoid contact, and further enhance the dysfunctionalism. Today, it seems as if the very word, “family,” has become a loosely applied phrase.

My thoughts also dwelt upon my family back in the States. Although an expat life has carried me to another continent, I still feel strongly connected with my family, and had therefore spent our time upon the hill, counting blessings for the closeness. Growing up with a large, extended family meant never knowing what it was like to be lonely, neglected, or to have first dibs on the bathroom. The last part of that phrase became a very important experience to own, given that the cabaña was filled with eleven members and only one bathroom.

We set our tent up on the balcony, which overlooked the lake in the distance. The winds happened to be 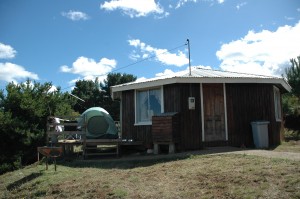 blowing strong that weekend, and to keep the tent from taking flight like Mary Poppins, we used all of the camping gear, including food cooler, baskets, backpacks, dog food bag and any other substance with weight to keep it relatively deck-bound.

At night, we fell asleep to the who-whooing of the owls, and in the morning, awoke to the sounds of roosters, cows, sheep, horses and pigs from nearby farms. For many of the Mapuche families living around the lake, farming is still very much a way of life. As with many Native Americans in the United States, the Mapuche have long lived in abject poverty. The establishment of campgrounds and cabaña rentals around the lake help to supplement their limited incomes.

Although most of our time was spent together in the cabaña, talking, cooking, eating, playing cards and sharing in the general company of one another, we took an excursion to a part of the lake which is held by the Mapuche community. One of the cousins, a teacher in Cañete, had made arrangements for our group to enjoy the clear, refreshing waters of lake from this private shore. 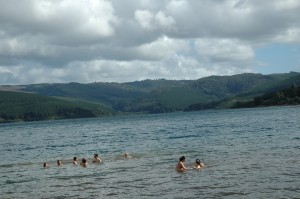 Although the lake was a little chilly, it felt good to stand chest high and be able to see clear down to my toes. Across the lake, the land rolled in folds down to the water. Groupings of pines intermingled with native trees and cleared pastures. Heavy, billowing clouds seemed to touch the tips of the trees uppermost branches. I felt a sense of peace descend upon me.

After a while, the cold began to permeate my being, and I made my back to shore. While the others continued their water-frolic, Teddy and I strolled along the banks. Deep crevices snaked their way into the land, and I wondered whether they were vestiges of the earthquake. The ground felt pliable under my bare feet, and I relished in the soft squishiness.

When we first arrived, I noticed the remains of a burned-down house, and a most intricate wooden 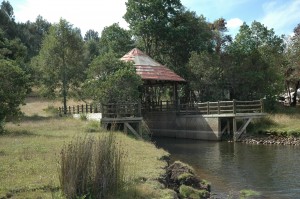 boathouse and launch. In the midst of such natural surroundings, it seemed to be a misfit. Later, I would learn that it related to story that had been told during our very first camp at the lake.

The story essentially told about a man, an emigrant to Chile, who had purchased land, built a house along its banks, and had imported a motorized boat for sport upon the lake, in spite of all restrictions prohibiting pollutants, including motor oil, to enter the lake. Lago Lleu Lleu is revered as the purest lake in all of Latin America, and apparently the man refused to comply. In ultimate frustration, unknown persons set fire to the man´s house in an attempt to end the violation.

In all of my camping trips along the lake, I have often wondered why anyone would want to intentionally destroy the naturalness, the beauty and the holiness of the lake. In last year´s posting about the lake, I had written about my own frustrations regarding some campers who had used soap to clean in the water, and now I found myself standing in front of the relic of others´ extreme frustrations. As beautiful as the boathouse and launch were, it made me feel somber, unsettled and incensed. My thoughts were somewhat assuaged when I learned that the land had reverted back to more protective owners. 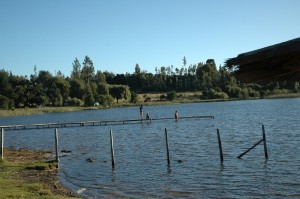 One of the interesting things about Lago Lleu Lleu is how different the various locations that we´ve visited are from one another. Every trip back, it seems that we discover a completely different lake. Some areas feel very reclusive, while others open to vast vistas of pines, or feel as if the bank on other side could be touched just by reaching out one´s hand.

On our last afternoon before leaving for Concepcion the next morning, we walked down to the campground below to take one last dip into the water. There we found that the shoreline was shared with another campground to one side, and a family farm to the other. Both were sectioned off with rustic fences of wood posts and wires. To one side, campers enjoyed the water, to the other, a family´s cows. Overhead, Chilean hawks performed areal feats, while searching for prey. Docks stretched out into the water, to provide platforms for diving and lake gazing. There were also large expanses of grassy lawn for sunbathing, reading, sleeping, and meditating.

For more information on the cabaña, as well as the campgrounds, contact Cabañas Kyllenco at 911547413.