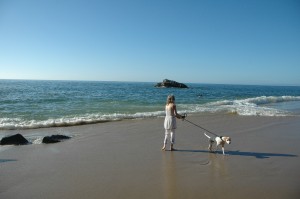 After landing in Chile, I explored many sites to help with my transition from fast-paced executive to slow-paced expat. While many were very helpful, there was one aspect that just didn´t seem to be well covered. What should one do when finding acceptance from your mate´s family is more difficult than a camel passing through the eye of a needle?

While I had expected many challenges, I was nonplussed by the initial rejection. All of my years in advertising, much akin to door-to-door proselytizing, were wrought with immense rejection. However, I learned that it wasn´t personal, that it was only the product being rejected, and to just let it roll off my shoulder. This time, however, it was different. This was personal, and my normally winning personality wasn´t wooing hearts. Needless to say, it was a tremendous blow to my otherwise inimitable self-esteem.

Part of the problem was rooted in an incident that occurred long before I had met my mate. He had casually introduced someone he was seeing while visiting Chile to his family. My darling man, who by then had spent his entire adulthood, of more than twenty years, in the States, had forgotten a cardinal rule of Chilean courtship.  An introduction to the family is as good as a lifetime commitment.

So, by the time we had our feet planted on Chilean soil, there was already an uproar brewing. The phrase that cropped up repeatedly, was “how could you bring that woman (meaning myself) here?!” The family, that is primarily the women, could not understand how he could introduce one woman and then bring another one back. It just wasn´t the Chilean way.

I inadvertently did not help my own cause during a two week, see-if-I-like-it visit prior to our move. Although part of our visit entailed giving presentations at a conference in Valdivia, the rest of the time was intended to be more of a carefree vacation, and we behaved accordingly. We ate, drank, sang, danced and traveled as contented our hearts. At the time, I didn´t know that there were different standards of behavior for men and women,

My career had been in a heavily male-dominated field, and I was more accustomed to the camaraderie and interaction with men than women. So, at Chilean family functions, I stood beside my mate, as my own person, interacting as I normally would have in the States. Given that my Spanish skills were limited to hellos and goodbyes, I also relied heavily on his translation skills and the limited English of one of his childhood male friends.

We stood around the grill, sampling the meats as they cooked, drank wine, told jokes and stories, and devoted considerable energy to merriment. According to one of the men, I was the Peggy Lipton to their Mod Squad.

At the time, I recall thinking how strange it was that the women kept themselves separated from the men, preferring to stay in the kitchen, or in their own group at a distance. I wondered why they didn´t join in on the fun. Language deficiencies prevented me from asking, and I had yet to learn the social structure. It was soon thereafter that I learned that my behavior would be misconstrued, reaping many derogatory comments from the women. I was behaving as a normal New York woman, and for a long time, our worlds would mix like oil and water.

The most disturbing rejection was from my mother-in-law. My family had readily accepted my choice in partners, and I had anticipated the same in turn. However, that was not to be the case, at least, not in the beginning. It proved to be a difficult transition from anticipating a familiar Chilean mate for her son to accepting the strange gringa that he brought home. The family safety net that I had hoped was to be as supportive as wet noodles.

Family gatherings became distressful, and I was thankful to have the cloak of the language barrier. As time passed, I relied less and less on my mate´s translation skills, and chose to remain silent. Rather than vent frustration over the inaccurate portrayal of my character, I stayed within my own thoughts. The need to quell the anger led to an initial and unfortunate loss of interest in learning the language. It was better to say nothing, than to give rein to my inherited verbal Irish temper.

During the first year of our relocation, a growing circle of friends began to fill the void created in leaving my own family behind. Also, in spite of myself, my comprehension of Spanish began to flourish. It was inevitable that survival skills would kick in.

It would be quite some time before I felt comfortable enough to attempt to speak in Spanish, and even then, would only be with those whom I felt confident and secure. For the most part, my silence act continued, and I joked with an edge of sarcasm that I was the perfect woman…I listened intently, but didn´t say a word.

This period of silence provided ample opportunity to observe and learn. Gradually, I began to comprehend the dynamics of Chilean relationships, both societal and familial, as well as the mores and parameters of acceptable behavior. I also began to understand my new family, how they thought, felt and had experienced life. I began to see how strange and incomprehensible they had found my culture and early demeanor. It is easy to forget that our perceptions are defined by our life experiences and exposure. As I began to understand the dynamics, the more my anger dissolved into sympathy. We were all subjected to our expectations.

Gradually, relationships and interactions began to change. Not surprisingly now, my early resistance to the language, out of anger, proved to be the hurdle to changing perspectives. Unable to communicate my thoughts and essence of personality impeded understanding and acceptance.

Thankfully, in addition to my brother-in-law, one aunt and uncle, and family of cousins, made me feel very welcome. They too had had many varied experiences, which perhaps one day, with their permission, I will share with readers. One cousin had once stood in my shoes, having married a man from and moved to a country more restrictive with women, and could understand my dilemma. The others, too, had been through experiences so life-changing that my introduction was hardly a novelty. They were and continue to be a blessing to my Chilean life.

The turning point with my mother-in-law occurred when we took a trip visit a cousin in Viña. This particular cousin, who I adored from the beginning, was very accepting of what my mate wanted in life, and hence of me. We had stayed with her off and on since our move, and I felt comfortable in attempting conversations with my limited Spanish. A very independent and strong woman herself, this cousin and I may not have spoken exactly the same language, but we understood one another from life experiences.

Within this more relaxed environment, my mother-in-law and myself were able to somewhat start anew, and try to find a common ground. It was the beginning of an accepting process, a time during which she began to who I really was as a person. I also began to learn more about her, her thoughts and experiences. It was the first time that I learned to have fun with her.

I know that we still have a long way to go. I also knew that if I stayed true to myself that eventually family would come to know my strengths, my convictions, my goodness and my aspirations. We still struggle to find ways to communicate, ways to find enough commonality. In keeping with my nurturing nature, I find ways to display my affection for her, which has grown over the past four years. While we may never have the type of relationship that I had originally hoped for, I think that we can at least develop something that will be liveable.  All in all, we love the same man and have an invested interest in making the relationship work.

For those who find themselves in my shoes, I would recommend to stay true to yourselves, wear the hide of a rhino, don´t worry so much about what family may think now, always keep finding ways to show your real nature, be flexible when possible (knowing that it doesn´t take away from your real essence to do so), and give time a chance to work. Definitely do not expect it to be easy from the beginning… it´s normal if it isn´t a challenge. Most importantly, remember the love that brought you to the soil that you now stand upon, and work hard to preserve that love. And lastly, know that there are sisters out there, like myself, that are willing to be sounding boards for the struggle, confusion, challenge, pain and bewilderment. We´re all in this together, with the same goal of making a new country a home.