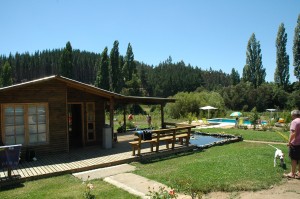 Chile is a country where people really know how to enjoy nature and life itself. This is particularly true on a sunny Sunday. Excursions are taken along the coast to savor the smells, sounds and tastes of the ocean, as well as inland to breath the fresh country air of the sierras and the mountains, and to savor the aromas of a meal being cooked over a wood fire. It is also quite common to see cars simply pulled along side a rural road, with a family enjoying a picnic. Sometimes all that is needed is a tranquil view.

On one particular Sunday, we were invited to join in a day of relaxation at a friend’s family campo tucked deep into the hills that predominate about an hour outside of Concepcion.

Departing from a main route leading out from Concepcion, we drove, for what seemed like an eternity, along twisting, turning, dusty, dirt roads. Cell phone signals became sporadic as we snuggled our way into the hills. After many attempted phone calls and repeated stops to ask for directions, we finally found the campo.

The word, “campo,” can mean many things in Chile, including everything from charming old Spanish colonial farms to extremely rustic, not-sure-if-you-want-to-put-anything-on-the-floor shelters with land. Either way, the natural surroundings are always guaranteed to far exceed whatever manmade amenities are available, and are always worth the trip.

Much to our delight, this particular Sunday’s destination was a well-planned mix of both rural and city sensibilities. On the foundations of what had once been a pig processing plant arose a mini weekend resort comprised of a prefab house with generous veranda and French doors looking out over spraying fountains, in-ground swimming pool and petit, manmade sandy beach. In the distance were pine-covered hills. Rows of corn and other vegetables greeted visitors as they entered the property.

Our friends were already working and partying away in the open kitchen. A giant mound of red potatoes occupied one end. At the other stood chefs de jour, Patricio (also called Pato, meaning duck) and Luco (called by his last name, reason unknown) peeling and frying French fries, a favorite snack food in Chile. They arrived earlier, and had commandeered the marvelous cement grill. The sink was already filled with ice and beverages. The main feature of the meal, a freshly processed boar, was marinating while the coals burned down.

As in Argentina, a parrilla (grill) is an essential part of cooking. It is usually the location where the men will gather to converse, joke around, and sample the meat as it cooks. As a gringa, with a Norte Americana conditioning, I’ve not been able to fathom the separation of the sexes during parties, and am often found hanging out with the men. The conversations can be about the silliest things, with jokes causing tears to pour from the eyes. It’s also the place where I’ve learned a lot about “Mars,” from the Chileno perspective. Definitely a recommended place to visit!

Throughout the day, we swam to our heart’s content, basked in the sun, wandered around with our Perdiguero puppies, and even walked barefoot in the creek that traversed the property. I indulged in photography, and even had go at badmitten.

It was such a wonderful, low-key day. The peace and serenity of the countryside was irresistible and therapeutic.

One of the most enjoyable parts of the day was sitting down to dinner. In a Chilean home, the dining table has to be the most important piece of furniture. It doesn’t matter how big or small, guests will squeeze together to share in breaking bread and stimulating conversation. Meals are not an interference that needs to be “gotten over with,” quickly, but rather a vital part of social and familial life.

For this particular Sunday meal, two tables were pushed together to provide comfort for guests and room for the many platters of boar, sausages, salads and pilaf. After the hearty meal and several bottles of wine, guests grabbed their beach towels, and reclined on the grass for an afternoon siesta. Although siestas are not a traditional part of life here, the languidness and laziness of the day warranted one.

Following the afternoon respite, the more energetic members of our group made their way back into the house for a lesson in salsa, instructed by our doctoral student, Heribelt. Tables were pushed back, and with music resounding through the large, open space, the eager students practiced salsa moves, Columbian style.

The day ended with a hearty game of volleyball, a quick swim and a joyful happiness in our souls.