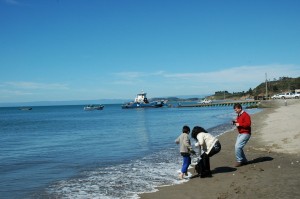 “… Shovel them under and let me work.

What place is this?

Where are we now?

I am the grass.

I wanted to cry this past Saturday. We had taken a drive to Llico, a small fishing town that we had visited the first time that I met some of my husband’s fun-loving cousins, aunt and uncle. It was during one of the first weeks that our car had been retrieved from the shipping container, and was licensed to traverse the roads. It was where I had experienced my first Sunday drive for pescado frito (fried fish) and a stroll along a beach. The day had been sunny, our dog George had survived his solo flight with American Airlines, and we were so happy to be transplanted to Chilean soil. It was an experience that had glowed warmly in my heart.

Our return visit, after more than two years, was spur of the moment. This past Saturday was sunny, pleasant, with just a tinge of Autumn crispness in the air, and we were desperate to get out of the city. Without any idea of where we really wanted to go, we grabbed our coats, keys and Georgie successors, Tammy and Teddie, and drove towards the Bio Bio. By the time we reached the last traffic light at the edge of Concepcion, our course was plotted. We would head south, driving through Coronel, Lota, and Arauca, to the peninsula where Llico lay.

On route, we stopped at Playa Laraquete for a light lunch of corvina a la plancha, papas fritas and Coronas at the LG restaurant. The beach was virtually empty, and from our second floor table, we had a perfect view of the ocean, as well as a gentle breeze blowing in through the open window. It so was peaceful and relaxing that I would have liked to linger longer, but Llico and memories were calling us.

Upon arriving in Llico, it was apparent that memories were all that were left. The town was virtually gone. Almost everything between the highway and the ocean had been swept away. What little was left was in the process of being bulldozed. The houses, the restaurants, the small shops and feria were gone. What remained was a vast expansion of beach that had not previously existed.

Men sat at the end of what had once been the boat launch, dangling their feet where water had once overflowed. Although we had heard that the earth had risen several meters, it didn’t seem real until we saw it with our own eyes.

As with Playa Laraquete, the beach was virtually empty. Only small throngs of people dotted the beach. Conversations were quietly conducted, with most eyes looking out toward the sea. I had the impression that they were seeing events that will always be imbedded in their brain, rather than the waves that were presently rolling in. There was a haunted look in the eyes that I dared to explore.

A new changing and restroom facility had been constructed. One end bore a brass sign with a tribute from the man who had donated the money in the memory of all of his amigos who had been washed away by the tsunami.

We didn’t stay long in Llico. The sadness was oppressive, and we decided to press on to Rumena. There we also found dramatic changes. A conversation with one of the fishermen revealed that the beach had been expanded by more than 80 meters. Instead of launching from the boat ramp, they had to lay down pine logs on the sand to act as skids as they dragged their boats to the water. The earthquake had added more burden to the hardships local fishermen and their families already faced.

We stood on the newly exposed rocks, watching the waves crash dramatically into a spray, and agreed that we still didn’t fully comprehend what we had experienced with the earthquake. We were thankful to just be together and alive.

Photo is from our first visit to Llico. There was nothing that I wished to photograph during our return visit. Perhaps another time.