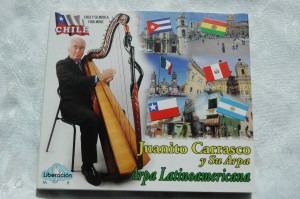 As Christmas Day approaches, numerous vendors and performers have taken to the streets to sell their wares or to promote their musical aspirations. Every once in a while, there is one so special that it boggles the imagination, pondering how such an artist could be so easily overlooked or forgotten. Such was the case a couple of days ago. While scouting for small token gifts, we spotted a nicely attired, white-haired gentleman sitting with a full harp pressed against his shoulder. Next to him stood a folding case on stand, which displayed various cds. A small bag sat at his feet, collecting an occasional coin from passersby.

As we approached, the sounds ringing from the harp were obviously picked by the hands of a master and not an amateur. After dropping a contribution, we paused to listen, first at a distance, and moved in to take a closer look at his selection of disks. The harpist´s name was Juanito Carrasco, and his repertoire was folk music from all over Latin America.  His harp of choice that day was a 36 string, in the style (and may actually had been) of those made by Lino Ruiz Diaz in Paraguay.

It was a real treat to hear a fine musician playing openly, and for free. Once we displayed an interest in his music and cds, others began to gather around, inspecting the selection and requesting to hear him play excerpts from the collections.  Several transactions were made by the time we finalized ours.

While online research has revealed little information about Mr. Carrasco, a number of sites displayed his music for purchase, YouTube features videos, and even Amazon offers MP3s of his repertoire. For a real treat in ethnic music, just give his name a google.