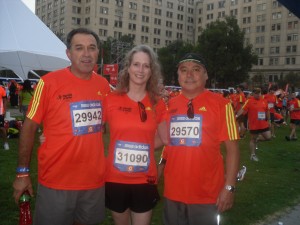 Before turning 40, my friend Michele gave me a list of things that every woman should do before reaching that mark. While never coming close to fulfilling the “to do´s,” it provided an opportunity to take a close look at my life, consider what I really wanted, what I wanted to remember when my life was done, and equally importantly, what I didn’t want my life to be. So, a good part of my 40s was devoted to making life changes. The only thing holding me back from living the life that I wanted was making the decision to choose it. Fear was the only thing in my way, and once put behind, I wondered why I had ever allowed it to stop me.

In The Ballad of Lucy Jordon, Marianne Faithfull sings about a woman, who by the age of 37, realizes that “she´d never ride through Paris in a sports car, with the warm wind in her hair.” Unlike this woman, who ultimately makes the dead-wrong choice, I chose to push aside and clear away much of what was wrong in my life, and preventing who, what and where I wanted to be. After many starts and stops, by the time I was 47, my release of fear had brought a new life, an amazing, loving man, a new country, a new career, a new masters degree, new adventures, new friends, and best of all, a new me.

Looking back, I sometimes wonder where I found the where-with-all to make that leap of faith. While many of my old (and still) friends feel trapped in their lives, in their jobs, in the daily grind, I managed to escape. With age 50 approaching, I recognize the merit of not being afraid of change, indeed of just not being afraid.

These days, I choose to embrace life with full gusto, and to remember Katherine Hepburn’s words that “if you obey all the rules, you miss half the fun.” So, when one of our friends suggested running the 10k in Santiago´s grand marathon, it became another experience to add to my personal to-do list.

The marathon, consisting of 42k, 21k and 10k runs, was an amazingly well-planned, international event. More than 25,000 participated in the events, and the streets were a sea of red Adidas shirts. For two days prior to the marathon, a vendors and registration expo was held in Santiago´s grand train station, which had been designed by Gustave Eiffel, the engineer of the famous Eiffel Tower in Paris. The opportunity to enjoy the beauty of this decommissioned station was a true and unexpected delight.

The night before the event, we donned our shirts to pin our numbers and re-laced our running shoes to accommodate the official marathon chips, which would facilitate the recording of our finish times. Lunch was the big meal of the day, and we finished with an evening onces (a Chilean evening tea with breads, cheese, ham, palta, butter and desserts). Alcohol was limited to a glass of wine… we were only mostly serious about the run.

The day of the marathon, we arose at 6:30, dressed, and walked a distance to catch the bus to the subway system, only to find that service didn’t begin until 8am. So, we walked a distance further to catch another bus. Without breakfast, or even a cup of coffee, I began to feel as if we´d already done our “10K.” With each stop, the bus picked up more passengers attired in red shirts, until it seemed like a private transport to the ‘thon.

Each of the races had their own assembly points, and ours was in Plaza de la Cultura, otherwise known as Plaza Bulnes. One area was designated for medical care and stands to dispense water, Gatorade and fruits after the race. From there we walked to the starting line, and the race commenced at 8:45, like a chain reaction.

While the 21k and 42k were for true running devotees, the 10k was a mix of earnest runners, runners pushing strollers, children pulling parents, friends gabbing with friends, and those who just wanted to see if it could be done. For myself, I fell into the last category. Although having participated in 5k fundraising races for cancer foundations, this was my first 10k. My goal was to just finish the race.

Following the same program as our running machine, I combined running with walking. This strategy worked well until I hit the 5k mark, that’s when muscle memory kicked in. The next 5k proved to be contest between mind and body. Thankfully, there was the city’s beautiful architecture and park to distract attention from legs that were in protest. Live bands, positioned at various “K” marks, belted out rhythms to keep the feet and heart pumping.

Crossing the finish line was a real sense of relief and accomplishment. I had once again proved to myself that nothing in my life was insurmountable. Although we would later find out that my chip had not activated, we estimated my finish to be around 1′:10″, having arrived just after our friend (1′:05″) and before my mate (1′:16″). While it wasn’t the most spectacular finish time, as the first to cross finished at 28’:56″, it marks another milestone in my list of firsts. Fresh from the marathon, and sporting some really stiff legs, I still feel the excitement of the challenge, and look forward to the next.

One thought on “Running Happily in Life´s Marathon”