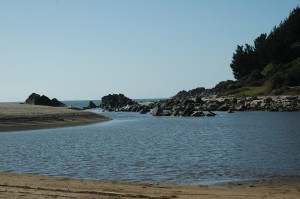 Put your hands into the earth and you´ll be energized.

For several days after returning from a month-long trek that lead from the winding Chilean coastline and beaches to the mountainous borders near Argentina, to national volcanic park preserves, outdoor sport paradises, and a culminating horseback jaunt in the Nevados of Chillán, I struggled with where to even begin to describe the varied experiences, terrains, smells, colors and sensations. Each was so unique and layered over another that it is overwhelming.

Acclaimed food author Paula Wolfert had penned the above quote in her cookbook “Mediterranean Grains & Greens.” While learning how to forage for wild greens, she had been instructed to do thus, to connect with the earth while taking its nourishment. In many respects, I have been doing the same. I have dipped my hands into cold Pacific Ocean waters, into warm white and black sands, crystal-clear lakes, grassy soil, volcanic-born mud and sulfurous thermal waters. Each dip gave nourishment to my soul, leaving me feeling energized and reborn.

I am often amazed by how my experiences of living in Chile, while on the surface are fun, entertaining and light-hearted, often have undercurrents that leave lasting effects on my internal being. It occurs without direct intention of a spiritual experience, but in hindsight and self-reflection are deeply enriching.

While Santiago offers all of the cultural, shopping and dining pleasures found in other world capitals and great cities, and apartment living in Concepcion provides convenience for work, it is the surrounding countryside, parks, beaches, mountains, lakes and farms that hold the greatest allure. Nature is so readily available that little effort is needed to connect. All one needs to do is to step off of artificial concrete and onto the verdant, earthy Chilean soil.

My time as an expat has allowed me to travel to regions and communities that fall far below the tourism radar, and perhaps that is one the greatest joy of expat life. No definite itinerary to follow, no glorified marketing spin to personify. All that is needed is a somewhat accurate map and a good sense of direction. The latter is really a no-brainer, for in Chile, the Andes mountains often remain in view to the east, while the ocean is often not far from sight in the west. Sometimes, it makes me feel that if I stretched out my arms, one hand could grab hold of a snow-topped mountain while trailing the fingertips of the other in refreshing Pacific water.

During the next couple weeks, several posts will feature snippets and photos of this summer´s wherever-the-wind-blows journey that began with a drive along the coastline to communities hardest hit by the 2010 tsunami, on the way to Viña del Mar and Reñaca; then south to Lago Lleu Lleu to give thanks for its protection during the earthquake; west to the volcanic regions of Tolhuaca, Malalcahuello and the interlago highway to Pucón; finally ending in the western part of the Bio Bio region, in the Nevados of Chillán. It was definitely not your typical tour group trip, and one that will remain in my thoughts for a lifetime.

So until then, Chao for now!