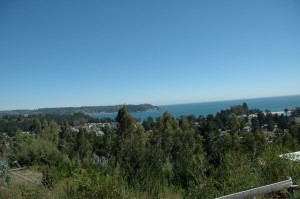 We had spent most of the afternoon in the hills of Pingueral, looking at potential sites to build a small home. Oft and on, we had contemplated a small place in Pingueral proper, but were concerned by the possibility of another tsunami. Even two years later, many shells of homes stand as reminders of what the coastline had experienced. Friends of ours had been staying at their home there, when the earthquake hit, and had the good sense to vacate. While the tsunami had devastated the beach and a large swatch of buildings in its path, their home had been far enough inland to avoid any serious damage. The wave only reached to the edge of their cul de sac.

The afternoon had been sunny, tranquil and thoroughly restoring. It felt good to breath the fresh air, to traipse through the remaining available sites, to dream about the possibility of finally getting out of apartment living, and to walk along the beach. By the time we were ready to return to the city, nature had soothed our senses and brought peace back to our minds. The sounds of the waves washing onto the shores, and the wind blowing through the pines, were completely therapeutic.

On the way home, we drove along the coast, all the way to Penco, which was the original site of Concepcion. After a tsunami and earthquake had destroyed much of the city in 1750, Concepcion was relocated to its current position further inland. Today, those living in Concepcion are often referred to as “Penquistas.” It is said that part of the original city is still submerged in the sea.

From Penco, we headed to our apartment building, nestled in the hills surrounding the university. It had been a glorious afternoon, and having foregone lunch, we were content to finish the day with an early dinner in the living room, and to watch a movie. Monday was going to be an early start, and a restful, early sleep was part of the plan. Nature, however, had different plans.

No sooner had we sat down to dine, when the building began to shake back and forth. The computer monitor, on the desk, was the first indicator that an earthquake was in progress. The screen was bobbing up and down, as if to say, yes, it´s what you think it is.

Our dog, Teddie, ran to the dining room. He could hear the glasses clinking together in the china cabinet. We stood in the living room, waiting to see if it was going to pick up speed and get worse. I shouted for Teddie, and grabbed his leash, in case we needed to flee. My mate, as he searched for his shoes, said that we were not prepared for this.

He was right. As the earth had begun to quiet down during the last two years, we had become more relaxed, not paying attention to where we left shoes, clothes and important documents. While we still kept a stocked pantry and water, we had otherwise become lackadaisical about our preparedness.

The tremor lasted for a long time, longer than any of the more recent tremors. Fortunately, the building that we had, earlier in the day, contemplated leaving, is so well positioned on rock that it rides the seismic waves well. Although everything was shaking, nothing fell over or came off the walls.

Car alarms, sirens and barking dogs competed to be heard. Surprisingly though, our building was quiet. It was still early enough in the evening for people to be out. We, ourselves, had been quiet during the shake; not even Teddie gave a bark. There is always something so surreal about earthquakes, especially when they catch you off-guard. Fear also has a way of producing a calmness; not the roll over and die kind, but a “let´s wait and see what we have to deal with” calm.

Cell phone services were down, but Bio Bio Radio, our favorite friend during the aftermath of 8.8 earthquake, was broadcasting. They reported that an earthquake had occurred just north of Talca, and that the University of Chile had registered it as a 6.8 on the Richter scale. Later in the evening, television news reported that it was a 7.1, which was according to seismic readings in the U.S. Some areas along the coast were issued evacuation warnings, in case of a tsunami.

We were lucky this time, and it was a good wakeup call. It is so easy to get caught up in everyday life, and to forget that we need to be on our toes. Unable to sleep until the sun rose, I made mental notes what needed to be done, and changes that needed to be made, to be more prepared in the future.  While our building seems sound, there is always a fear that it could topple from its hillside perch. The image of Alto Rio, a building that fell and broke in half, will always be with us.